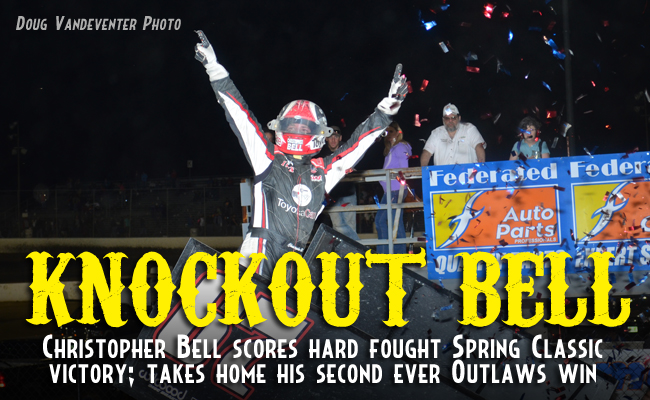 Christopher Bell Battles at Pevely for Second Ever Outlaws Win

PEVELY, Mo. – May 2, 2015 – Saturday night’s Spring Classic at Federated Auto Parts Raceway at I-55 was an event no one will soon forget – not least of whom, its winner Christopher Bell and his car owner Keith Kunz.

The epic 40-lap feature at the third-mile bullring was a battle of wills and endurance that pitted some of the greatest veteran, and current and future stars against one another – names like Swindell, Madsen, Sides and Bell. Side-by-side racing, slide jobs and a little bumping and banging led to the second career World of Outlaws Sprint Car Series win for 20-year-old Bell.

“This is unbelievable,” Bell said in victory lane. “I can’t thank Keith Kunz enough for this opportunity. It’s really awesome. They built this car brand new this off-season. It really shows what good equipment does for you.”

For Kunz, a prolific car owner and mechanic, the win came in just his 10th start with his winged sprint car and just third ever Outlaws start. The win was his first ever Outlaws win as an owner.

Bell, who stood in victory lane for the first time with the series last season at Jacksonville Speedway, is the 10th different winner so far in 2015.

The night got off to an unusual start after polesitter Rico Abreu was unable to get his car fired for the feature. That shifted Jason Sides onto the front row with Kerry Madsen. When the green flag flew, Madsen jumped to the lead. By lap five he had already caught lapped traffic as the battles behind him ensued.

Kraig Kinser, Bell and Swindell all fought for the third position. On lap 8, Kinser looked for a way around Bell and as the two came out of four, side-by-side, Bell held onto the position. Three laps later, it was Kinser playing defense as Swindell looked low through turn four and slid past Kinser to take over the fourth position.

Bell meanwhile was charging forward. He got around Sides on lap 12 to take over second and then set his sights on the leader, Madsen. Two laps later, he slid Madsen into turns one and two and took the lead as the two drivers hit the backstretch. Madsen was not done though. He performed a similar move on the following lap and briefly retook the lead as they hit the backstretch, but Bell held on to lead the lap.

As Bell worked to build a lead, Sides battled Madsen for the second spot and found his way around on the low side on lap 19.

A caution flag flew on lap 20, the halfway point of the race, as David Gravel spun on the front straight.

The restart set up an opportunity for Swindell. When the field returned to green, the 294-time Outlaws winner cleared Madsen and Sides and then got around Bell off of turn four as the two completed lap 21. The move was short-lived for Swindell though as Bell battled back around the veteran driver to retake the lead on lap 24. Through the next several laps, the three way battle between Madsen, Bell and Swindell continued.

Madsen, then running in the third position, nearly met disaster on lap 26. As he entered turn one he slid the car, it caught, and almost sent the driver around. Sides took over the position as Madsen slipped back. Just a few laps later, Sides was back to battling Swindell for the second spot – a fight that lasted for the next several laps.

It was critical lapped traffic that finally provided Sides with the opportunity he needed. As he and Swindell worked to complete lap 37, he was able to get side-by-side going into turns three and four. That lapped car, hanging onto the middle, slowed up Swindell enough that Sides was able to get around.

Sides took over second and then started making up ground on Bell who was struggling through traffic.

“The lapped cars got to where they were getting around here pretty good,” Bell said. “I could run up to them, but I couldn’t get off them to slide them. I kind of messed around a bit and lost a bunch of ground. Had to realize that I had to catch them and get up to their bumper before I could pull the trigger.”

As Sides closed, a caution flew for Paul McMahan who slowed on the front with an expired engine. With just two laps remaining, this meant a single file restart and green-white-checkered finish.

Bell quickly built up a lead when the field returned to racing. As Sides fell in behind Bell, the battle for third heated up. Swindell slipped on the start which provided Pittman the opportunity he needed to get around. A surging Saldana, who started in 18th, looked to make up a few more spots.

Bell took the checkered flag followed by Sides in second. With the checkered in sight Pittman and Saldana were side-by-side coming off of turn four. The drag race to the finish favored Saldana by a nose.

Sides, who has been on the upswing so far this season, said starting on the front row was not an ideal situation for his style but he complimented crew members Paul Sides and Scott Gerkin with working hard to give him the equipment he needs to be in contention.

“We had a good racecar. We put ourselves in contention to have a good run,” Sides said. “Everybody who is working on this car, we’re knocking on the door and hopefully we can get a win soon.”

After advancing 15 positions through the feature, in addition to owning a podium finish, Saldana took home the KSE Racing Hard Charger award. He said a little trial and error helped put his Motter Equipment team in position at I-55 on Saturday night.

“We’ve been fighting our car at tracks like this and we tried something crazy tonight and it actually worked,” Saldana said. “I actually think at the beginning of the race, we had a really good car and it just kept getting better and better and better. It’s very positive that we can come out of Pevely with a good solid top-3 knowing we had more there. I’ll take it to Haubstadt tomorrow.”

The World of Outlaws Sprint Car Series wraps up three straight days of racing with a visit to Tri-State Speedway in Haubstadt, Ind. tomorrow night. Great tickets remain. Visit the track or http://www.WoOSprint.com for more information.