LIKE IT SIDEWAYS: NASCAR fans discover new passion for dirt racing, look to World of Outlaws and DIRTcar 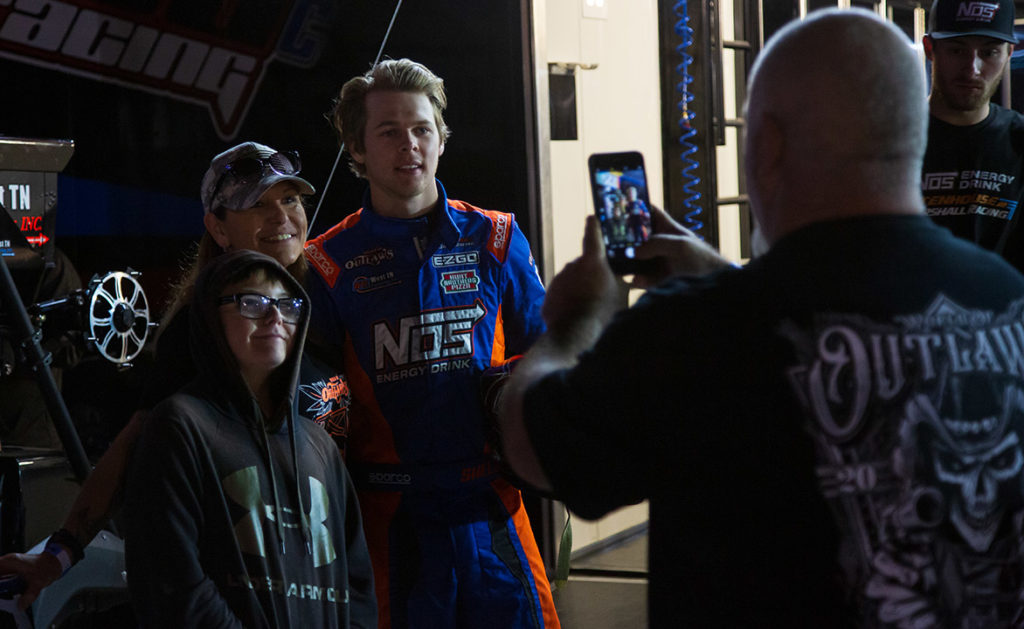 Brothers Joseph (6) and Andrew (16) Cochrane wanted one thing for their birthdays: to go to Bristol Motor Speedway for NASCAR’s dirt race. On their way out of the event, they had one more request: to see the World of Outlaws at Bristol in April.

“We’re actually trying to plan to see if we can make it work in our schedule next month to come here,” said Jeff Cochrane, the brothers’ father.

The NASCAR Truck Series and Cup Series events on Monday brought dirt racing to a fan base unfamiliar with a brown track and terms like “tacky” or “cushion.” However, for fans young and old, this new style of racing, to them, brought a new level of excitement.

Not only were Jeff Cochrane’s sons impressed by the dirt racing action, he was too. They’d been to Bristol several times, but the NASCAR Truck Series and Cup Series events on Monday were their first trip to a dirt race. Jeff grew up near Volunteer Speedway in Bulls Gap, TN – where the World of Outlaws Morton Buildings Late Model Series will visit Sept. 4 – but never made it out to see a race. Now, he’s hooked.

“It’s awesome,” Jeff Cochrane said. “We like watching the cars getting loose in the turns. This is amazing.

“It was pretty neat how [Matt Crafton] was trying to go up to the top side, the high line, just getting completely sideways outside the other cars. That was awesome.”

The wide-eyed expression and head nodding from Andrew proved the love for dirt racing was contagious.

Patrick Hunter, from Greenville, SC, has been a Sprint Car fan throughout his life, following the likes of Lou Blaney – father of former NASCAR driver and 1995 World of Outlaws NOS Energy Drink Sprint Car Series champion Dave Blaney. That fandom led to his support of NASCAR Cup Series driver Ryan Blaney – Lou’s grandson and Dave’s son. That brought him to Bristol with his two daughters, Gia (10) and Lucy (12).

For the two girls, the events were their first time at a dirt race. And like the Cochranes, they couldn’t get enough of it. While shy with words, Gia said she enjoyed the atmosphere of the event and Lucy said she’d like to attend more dirt races.

The drivers, even those with little to no experience on it, gained a new passion for the form of racing. Joey Logano, who became the first NASCAR winner on dirt in 50 years on Monday, ran a DIRTcar UMP Modified during the 50th DIRTcar Nationals at Volusia Speedway Park in February to prepare for Bristol. But what was meant to just be a warm-up, became a fun experience after racing from 19th to third in his first time out in the car. Logano credited that experience as being key to his Bristol dirt win.

“We’ve done a lot of work in the dirt department with my buddy Ryan Flores and my car chief Jerry Kelley doing a good job with the modified and just making laps and learning where I was going,” Logano said. “A lot of that helped.”

To Eric Shanz, from Cincinnati, OH, who’s also been to Bristol before, nothing has compared to the dirt race.

“The hype is not enough. It should’ve been higher, man,” Shanz said. “That was f***ing awesome. It’s just crazy. Everyone going around the turns just going crazy. Every time I turned, I was like, ‘Wreck! Wreck! Wreck! But they held on to it. It was nuts, man.”

He too expressed his excitement to see drivers like Kyle Larson, Stewart Friesen and Matt Crafton take more laps around the half-mile track during the World of Outlaws Bristol Bash and World of Outlaws Throwdown.

“Dirt is awesome,” he said.

For tickets to the World of Outlaws Bristol Bash and Bristol Throwdown, CLICK HERE.