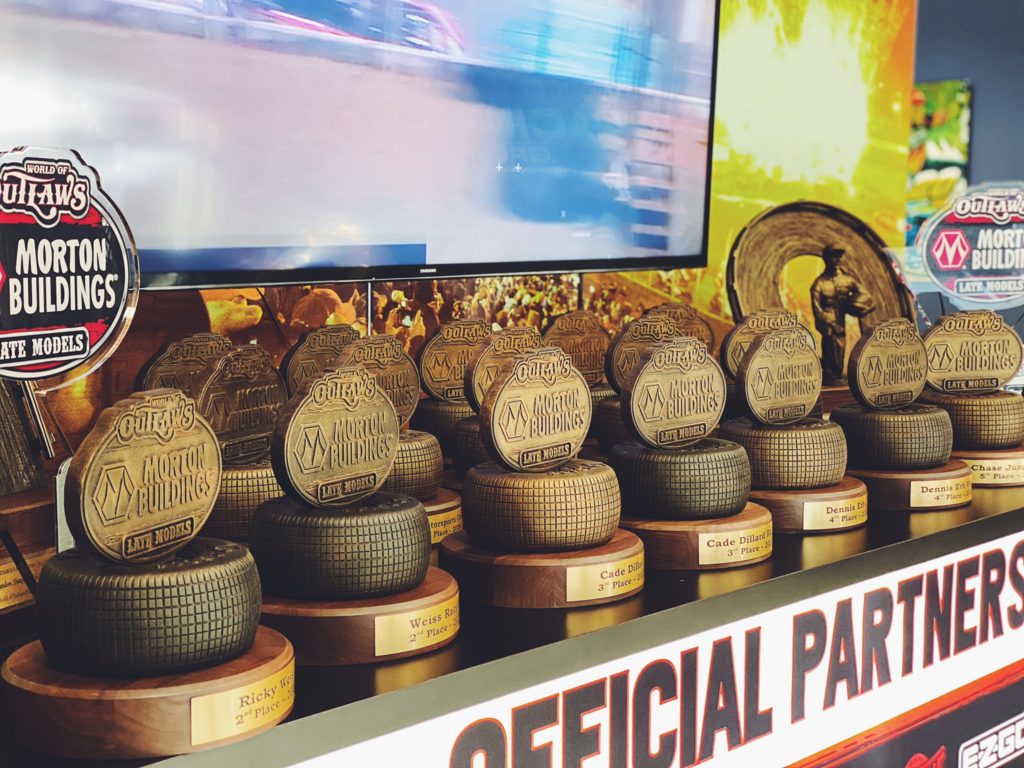 While the annual awards banquet was cancelled with restrictions in place, the World of Outlaws Morton Buildings Late Model Series remained committed to honoring our teams and remembering the 2020 season.

Gathering the ten platinum drivers at the World Racing Group office in Concord, North Carolina, we sat them down individually to record a Virtual Banquet!

With 40 races at 25 tracks in 10 states, this year’s slate was a trying one as we were forced to navigate the uncertain times amidst the COVID-19 pandemic. It was no easy task completing a full campaign, but with the support of our sponsors, tracks, drivers, teams and staff, we got it done in a big way this year.

Now let’s look back on the successes of 2020 and remember the men behind The Most Powerful Late Models on the Planet:

Brent Larson’s third year on tour offered up plenty of change, most notably in his switch from Longhorn Chassis to Barry Wright ICON Race Cars in August. It proved to be the right call for the Minnesota man when he went out and electrified the Williams Grove (Pa.) Speedway crowd with his Fast Time Award at the wicked fast half-mile.

“2020 was up and down, hit and miss, not exactly what we hoped for. We got off to a bad start this year without the sponsorship we needed; for us, just finishing this year was a big accomplishment. It wasn’t what we hoped for, but we made it through the year. We’ve put ourselves in good shape for next year with our motor program and new cars, so I’m excited for what’s to come.” – Brent Larson

The life of the party, Boom Nation had a good time watching their favorite driver in 2020. From his track record at Vado (N.M.) Speedway Park in January to his top five finish at Lernerville’s (Pa.) Firecracker in June to his near first-career win at Eriez (Pa.) Speedway in August, Briggs was never short of exciting rides this year; even his flip at Cedar Lake (Wisc.) Speedway on Fourth of July.

“It was an odd year for lots of reasons. We had too much bad luck at the beginning of the season with parts breaking that shouldn’t break. We switched cars there after Cedar Lake in August and ended up fairly strong at the end of the season. I’m glad to get it over. Hopefully 2021 is better for everyone. I’m gonna go do fishing and get ready for Volusia in January.” – Boom Briggs

Delivering the goods in his return to full-time action with the World of Outlaws Morton Buildings Late Model Series, Bloomquist was always-exciting throughout 2020. As he recovered from hip surgery and dealt with team changes, Black Sunshine never wavered in his quest to get back on top. He finally made it back atop the mountain in September at Thunder Mountain (Pa.) Speedway, winning his first race in 300+ days and snapping a 44-race drought by parking his Drydene Performance Products No. 0 in victory lane.

“I’d like to thank Drydene for backing us this year. Ed Petroff for sticking with us too. VP Racing Fuels, Penske Racing Shocks, Hoosier Tire. We’ve got a lot of good plans, I’m looking forward to next season. I’ve only got about 10% numbness left in my leg, so things are looking up.” – Scott Bloomquist

Coming into his own throughout the return to racing, 20-year old Winger showed the characteristics of a wily veteran in the midst of his remarkable Rookie of the Year campaign. His first-career win at Cedar Lake (Wisc.) Speedway on July 3 brought him national attention when he beat Brandon Sheppard straight up for $20,000 in an instant classic. He continued to improve as the year wound down, returning to the podium again at Thunder Mountain Speedway with a 21st-to-third drive in his Rocket No. 12.

“Our car was fast all year long, I just made too many mistakes at times. We picked up a lot around June and then we got that win at Cedar Lake, where I lost probably ten years of my life thanks to Sheppy. I felt like we were in contention to win some other races, but we let some get away. This whole season and winning Rookie of the Year means a lot to me. I hope we can do this deal again next year.” – Ashton Winger

The Bluegrass Bandit returned to form over the summer and went on a hot streak that eventually delivered his first win of the season in dominating fashion at Red River Valley (N.D.) Speedway in July. If it weren’t for a hard crash at The Dirt Track at Charlotte, which kept him out of the car for the season finale, Lanigan could’ve finished third in this year’s standings. Already committed to Viper Motorsports in 2021, the 50-year old inductee to the National Dirt Late Model Hall of Fame will be back next year to chase more wins, titles and records.

“It was a good year for us to get back on track. We had a lot of strong runs all over the place and built some momentum for our program. We’ll be back next year; hopefully competing for more wins and the title.” – Darrell Lanigan

Junghans continued to prove himself as a model of consistency in 2020. Scoring two podium appearances at Plymouth (Wisc.) Dirt Track and Lavonia (Ga.) Speedway, Junghans was almost always a top-ten runner with 26 top ten finishes (third-most) in his 40 starts. For the Kansas racer, it marked his second straight year as a top-five finisher in World of Outlaws Morton Buildings Late Model Series points.

“I think we had a better car than fifth-place in points, but just had too much bad luck. For what we went through though, I think this year was a success for everyone. Hopefully we can come back strong next year. I feel confident that we’ve got a really strong race car, we’ve just got to put the pieces together.” – Chase Junghans

For someone as successful as The One Man Band, it’s hard to believe his fourth-place finish in 2020 with the World of Outlaws is his career-best effort in any national touring series. Erb snapped a three-year drought when he won at Eriez (Pa.) Speedway and performed a stellar late-season rally to roar from sixth-to-fourth in the standings, a charge that brought him an additional $11,000 in points fund payout.

“It’s been a different year for us, but we got through it and had a lot of success. It was challenging, but it was good for us. Congratulations to Brandon [Sheppard] on his championship and Ashton [Winger] on Rookie of the Year. We’re going to take a couple months here and get ready to go in Florida.” – Dennis Erb Jr.

Thriller’s 2020 season can be summed up in just four words that he let out after winning the Firecracker, “A dream come true.” In his sophomore campaign, Cade improved vastly, earning the Drydene Blood, Sweat & Gears Award for his charge from 7th-to-3rd in points. He recorded his first-career win at New Mexico’s Vado Speedway Park in January, then banked $30,000 in the biggest win of life at Lernerville (Pa.) Speedway’s Firecracker in June.

“It’s been a great year for me. The stuff that I’ve been able to achieve and accomplish has been a dream come true. Some of the stuff we’ve been able to do, I would’ve never imagined in a million years. I was blessed with a lot of great opportunities this year. To be in the top three with Brandon and Ricky is a huge honor.” – Cade Dillard

The Manitoba Missile’s sophomore season didn’t disappoint, as the 32-year old Canadian drove his Drydene Performance Products No. 7 to a runner-up result in the championship standings. His long overdue first-career victory came at Vado (N.M.) Speedway Park and he quickly followed that up with a second triumph at Jackson (Minn.) Motorplex. While he tailed off over the summer, Weiss gathered it back up in the fall with three runner-up runs at Lancaster (S.C.) Motor Speedway, 411 (Tenn.) Motor Speedway, and The Dirt Track (N.C.) at Charlotte. After back-to-back podium placings in the championship, is 2021 the year Ricky nails down the title?

“Going up and down the road is real hard, but it’s been worth it this year. We’ve put our blood, sweat and tears into this thing. I’m very proud of my team and what we accomplished this year. Hopefully in 2021, we can make a run at that championship and give Brandon a run for his money.” – Ricky Weiss

The Rocket Shepp extended his reign as king with his second-straight title and third in the last four years with the World of Outlaws Morton Buildings Late Model Series. From his four-race winning streak in July and continued Pennsylvania prowess to the closest win in series history (.007 seconds) at Davenport and a $20,000 victory LIVE on CBS Sports Network, there was little that B-Shepp didn’t do in 2020. With his $100,000 championship payday on top, Sheppard banked more than $750,000 overall this year.

“It’s been a phenomenal year for us again. My team and I have been working our tails off. I wouldn’t be where I am without those guys. It’s been an amazing ride that I want to keep going for a long time. My dad and my grandpa have been by my side since day one, they’re a huge part of my career.” – Brandon Sheppard

The full list of special award winners at this year’s Virtual Banquet:

The 2021 World of Outlaws Morton Buildings Late Model Series season will be bigger and better than ever with 55+ races, more special events, and increased payout all announced. It all begins in just 65 days with the Sunshine Nationals at Volusia (Fla.) Speedway Park on January 14-16. You can buy tickets for the season opener HERE.