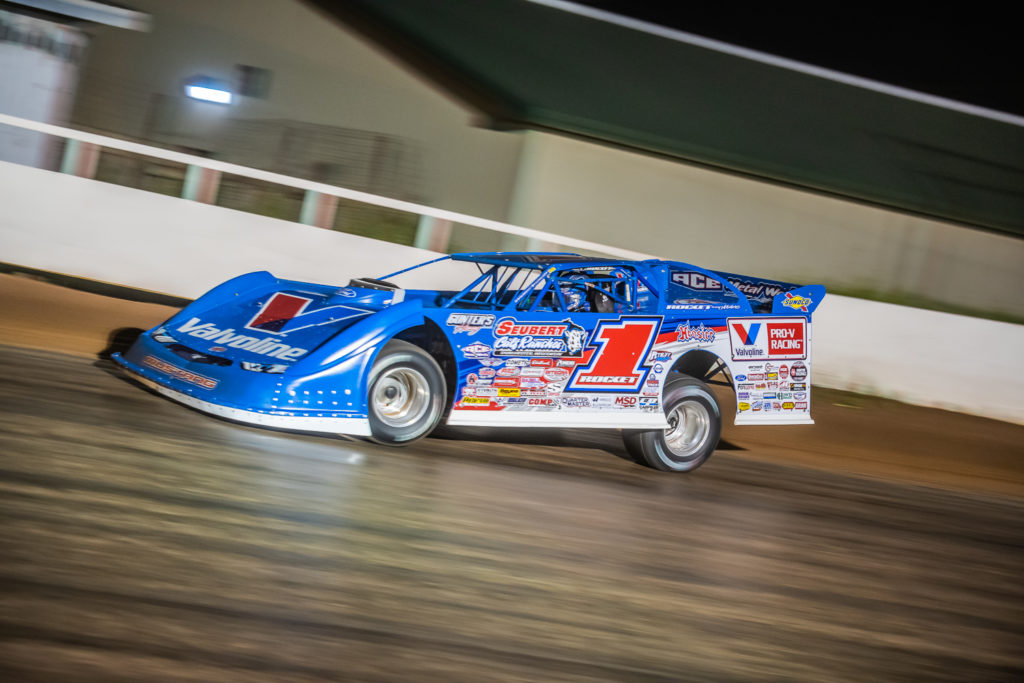 There’s no doubt the talk of town was who to pick for the win at Gondik Law Speedway – the 1 or the 20?

At the end of a smooth and slick 50 laps around the Superior, Wisc. 3/8th-mile, it was Sheppard standing atop his Valvoline sponsored, Durham Racing Engines powered Rocket Chassis No. 1. Leading every single circuit, “The Rocket Shepp” silenced the naysayers with a dominating performance to take his fourth straight World of Outlaws win (ninth of 2020) ahead of Cade Dillard and Owens in third.

“Jimmy has been so tough all year, especially since we picked back up and started racing again,” Sheppard said of Owens’ added presence on Tuesday night. “He’s been real dominant over there on the Lucas Oil deal and has been winning a ton of races, so I knew it would be tonight. Not that it’s not tough every night, because we’ve got a great bunch over here with Cade, Ricky, Scott, Chase, Darrell, and all the rest of the guys.”

Beginning the battle in qualifying, Sheppard timed in fourth, while Owens went second, and James Giossi of Hudson, Wisc. earned his first career World of Outlaws Fast Time Award. Setting the stage for Drydene Performance Products heat four, it was Owens and Sheppard side-by-side on the front row. Following heat winners Mike Prochnow, Kevin Eder, and Cade Dillard, the duo went to war with a spot in the Morton Buildings Feature Redraw on the line. Ultimately, Sheppard powered around the outside and passed Owens on the top to start the heat, a move that would solidify his heat win and lead to him drawing the pole position.

Jumping out to the early lead in the 50-lapper, Sheppard assumed command and never looked back. Carving through lap traffic and surviving a pair of restarts at halfway, B-Shepp and the Rocket1 were simply untouchable at Gondik Law Speedway. However, with rising sophomore Cade Dillard and superstar Jimmy Owens behind him, Sheppard knew he had to keep it together.

“I was kind of watching the scoreboard just to see who was back there,” Sheppard noted speaking of his challengers. “I knew once Cade got to second and Jimmy was third, that I needed to stay on top of my game. I knew they were gonna be there when it came down to it. It’s definitely nice to to know we hold those two guys off, especially in this type of condition which isn’t really my style.”

Hailing from New Berlin, Ill., the 27-year old ace noted his love for bullrings, cushions and elbows-up kind-of-nights, but to win his 64th career World of Outlaws Morton Buildings Late Model Series feature, Sheppard had to dial in the No. 1 to a black slick Wisconsin 3/8th-mile; a challenge he accepted and crushed.

“I like to think I can run on all conditions, but this is definitely one of the tougher ones for me as a driver as slick as this track was,” spoke Sheppard on the track conditions. “They told me it would get black by the end of the night and we’d race all over it, and that’s exactly what happened. It was kind of hard to maneuver around and pass cars, but I was getting through lap traffic okay for awhile. We had a really great car though. It helps when you qualify good and win your heat, I think that was the key for us again.”

Finishing second to Sheppard to pick up his fourth podium over the last three weeks was Cade Dillard of Robeline, La. in his MB Customs No. 97. Starting fourth after winning the third Drydene heat, Dillard slipped as far back as sixth before rallying and then living up to his nickname. Going from fifth-to-second in one lap, ‘Thriller” wowed the crowd with a masterful lap 24 restart which saw him go three wide with locals Prochnow and Eder before storming to the runner-up slot. After letting Sheppard slide away to a near 3.5-second advantage, Dillard went to work and found speed late in the running, cutting a whole two-tenths off his lead before running out of time on lap 50.

“He probably got a little too conservative out there while leading and I bet he picked it back up there at the end,” Dillard said of Sheppard’s lead. “I felt like we got a lot better as the race went on, I just struggled in the beginning and lost those crucial spots. Once I finally them back I thought we were really good in the open air and ran up to him in lap traffic.He was just too good. It would’ve taken a big mistake to get around him. Finishing second to those guys right now is nothing to be upset about. This place is awesome though. I dream of tracks like this.

Making a six-hour overnight trip from Farley, Iowa to Superior, Wisconsin, Jimmy Owens and his Ramirez Motorsports No. 20 capped their World of Outlaws performance with a third-place finish to round out the podium. Also slipping at the start, the Newport, Tenn. native fell to seventh, but like Dillard was able to recover and charge forward near halfway. The O-Show followed Thriller’s footsteps for a handful of laps with the second spot on the line, but faded in the final laps before offering a true challenge.

“It was definitely worth the trip coming up here,” Owens said of his Tuesday trip to Gondik Law. “We’ve got a few kinks to work out on this car. We don’t run the quarter panel height rule a lot, so we made some swings at it after how we felt in the heat race. We got rolling pretty well there around halfway though. I think we kind of chunked the right rear tire out there at the end, which hurt us a little bit. Not making excuses though, we had a great car to come home in third tonight. Looking forward to the next time I can come back and run with these guys.”

Completing the top five behind Sheppard, Dillard and Owens was The Bluegrass Bandit Darrell Lanigan in fourth aboard his Viper Motorsports No. 29V Barry Wright Race Car and Rookie of the Year leader Ashton Winger of Hampton, Ga. in his Franklin Enterprises No. 12 with a fifth-place finish.

“River Cities is my favorite track on this whole swing,” said Sheppard, who will go for his fifth-straight win at the Grand Forks track on Friday night.