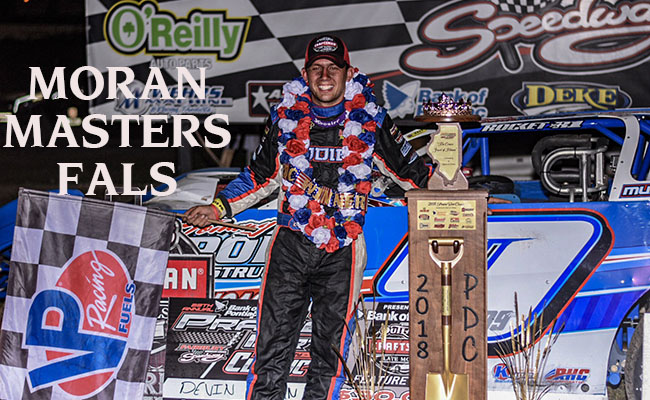 2017 Rookie of the Year scores biggest win of his career

FAIRBURY, IL — July 28, 2018 — The World of Outlaws Craftsman® Late Model Series headlined one of the most prestigious races in the country on Friday and Saturday night: the 29th annual Prairie Dirt Classic presented by Bank of Pontiac. The fast quarter-mile of Fairbury American Legion Speedway, located northeast of Bloomington in Fairbury, IL, served as host to the 100-lap Feature, paying $30,000 to win. Fans cheered as a rising star emerged victorious with the biggest win of his career. 2017 World of Outlaws Rookie of the Year Devin Moran passed defending Series Champion and defending Prairie Dirt Classic winner Brandon Sheppard for the final time with 21 laps to go to secure the big payday.

“Once we moved up to the top, I really found something there, and the car was just so phenomenal. It’s incredible what we can do with such a little team that we have. Everyone on this team has come together, and to be able to do what we’re doing is so unbelievable,” the 23-year-old stated standing next to his #9 Tommy Pope Construction / Rocket XR1 Chassis / Clements Racing Engines entry. “It’s by far the biggest one. This tops them all. It’s just incredible what we’ve done, and I can’t thank God enough for blessing us with the capabilities to come out here and race, let alone win,” added the Dresden, OH driver, who garnered a total of $33,200 for his efforts.

Chris Simpson and Sheppard would bring the star-studded 29-car field to the green flag to begin the century grind. Simpson would race out to the lead early while the rest of the field settled in behind him. After following Simpson around the fast quarter-mile, Sheppard made his move to take over the top spot, and he brought with him Chris Madden, who started fifth, and Moran, who started third. The trio then pulled away from the rest of the pack with Moran getting by Madden for second. On lap 42, Moran took the lead for the first time and led the field to the halfway point.

Madden slipped past Sheppard for second and began to challenge Moran for the race lead. Sheppard regained the runner-up spot and quickly caught Moran, who was mired in traffic. On the final restart after a caution —of which there were many — coming on lap 69, Sheppard immediately began pressuring the race leader. On lap 72, Sheppard stole the lead away only to lose it a lap later.

Sheppard tried one more time on lap 78 and again was scored as the leader only to again lose it right back the very next lap to Moran for what turned out to be the final time. Moran put plenty of real estate and lapped traffic between he and Sheppard to seal the victory, the biggest of his career.

“Man, I got nervous there on that last restart. Every time we restarted, that top just kept getting faster and faster. I could tell why once we moved up there, and it was way better for us. (Crew Chief and brother) Wylie (Moran) just kept pulling the sticks apart, so I just kept running up high, and it worked out for us,” explained the Buckeye State driver. “This is so cool. We just kept fine tuning little things all weekend long, and it was just really good. When we can do that, I’m happy,” Moran ended.

Current points leader Mike Marlar, who started 15th, passed Sheppard with two laps to go to claim the runner-up position. “We had a really good race car, and it was a really good race track tonight. It was so congested early, but once it cleared out, I was able to get to the front,” stated the 40-year-old driver who was able to gain some points to add to his lead in the standings in his #157 Delk Equipment Sales / Rocket XR1 Chassis / Cornett Racing Engines machine.

“Also, congratulations to Devin (Moran) and his team. He’s been doing an awesome job, and I’m real proud of him. If we would’ve had a caution there we might’ve had a shot, but we had to really work to get by Brandon (Sheppard) for second, so we’ll take it, and we know we did the best we can,” added the Winfield, TN pilot.

Rounding out the podium was Sheppard, who led on four different occasions for 25 total laps before finishing in third in his #1 Seubert Calf Ranches / Rocket XR1 Chassis / Durham Racing Engines entry. “We were really good the whole race, but Devin (Moran) was just a little bit better tonight. I got a little bit free when we got to the lapped traffic, and that’s where we needed to be a bit better,” explained the 25-year-old from New Berlin, IL. “It’s typical Fairbury, though. There’s three grooves of racing and when you get to them they’re all over the place and they’re fighting for position too. We’re thankful to be in the top three though,” Sheppard remarked.

Earlier in the weekend, on Friday, July 27th, Bobby Pierce won his first PFC Brakes Fast Qualifier Award of the season and second of his career with a 13.188. Simpson, Sheppard, Moran and Babb won the Showdown Qualifier Features. On Saturday, July 28th, Gordy Gundaker, three-time Series Champion Billy Moyer and Tyler Erb won the Last Chance Showdowns. Pierce picked up an amazing last-race victory in the Prairie Dirt Shootout, from 16th, and chose to exchange the $2,000 payday for the 27th starting spot in the main event.

For more information, visit the track website located at: plymouthdtr.com