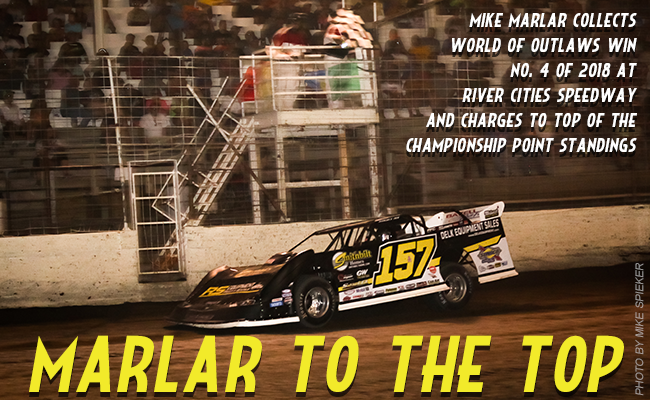 GRAND FORKS, ND – July 13, 2018 – Mike Marlar was behind the wheel of a rocket ship on Friday night at River Cities Speedway en route to collecting his fourth World of Outlaws Craftsman® Late Model Series victory of the 2018 season. With this triumph, Marlar charged to the lead of the championship point standings for the first time this season.

It wasn’t an easy victory – Marlar had to work for it. Starting fourth in the feature, the driver of Winfield, TN maneuvered his way past Ricky Weiss, Rick Eckert and Brandon Sheppard to commandeer the top spot.

“I don’t think I’ve worked that hard in a racecar in years,” said Marlar. “It was a fun race to drive but a lot of times I was like, ‘Man, one of these times I’m going to give this thing away and let loose of the steering wheel or something’”

Marlar claimed the lead on lap 22 after running door-to-door with Weiss for multiple circuits. When the checkers fell, Marlar finished nearly one second ahead of a hard-charging Sheppard who had closed in on the No. 157 the final laps.

“This northern racing up here is awesome,” added Marlar. “We had a good car there. It was a handful to drive. The thing that made it hard to drive is probably the thing that made me win, so it was really good. Man, I had a lot of torque and a lot of traction but man, that made ‘er hard to drive too. The track guys worked on this racetrack all night. Track prepping it and prepping it. Thanks to my crew Josh [Davis] and Jerry [Sprouse], my car owner Ronnie Delk and everyone that makes this happen. It’s a lot of fun.”

“Awesome race and I guess we got the points lead, so that’s cool,” continued Marlar. “We just want to go out every night and win some races and just run good everywhere and whatever happens, happens.”

Marlar swept the night with by collecting the PFC Brakes Fast Time Award, his heat win and the $10,000 victory. That was just the results that Marlar and his team were hoping for. Headed into the event, Marlar was tied for first in the championship point standings with Chris Madden.

While Marlar had a picture-perfect evening, Madden found a strike of bad luck. As he was running sixth on lap 39 of the 50-lap event, Madden blew his motor forcing him to retire from the remainder of the race. Madden went from being tied for first in the point standings, to plunging 30 points behind. This places him only eigth points ahead of Sheppard in third.

Sheppard has been on a recent hot streak allowing him to steadily climb ahead in the standings. Winning three of the past five races and eight Series wins overall, Sheppard and his Rocket1 Racing team are still hungry for more victories and podium finishes.

“I had a really good car there,” said Sheppard. “I think Marlar was a little bit better. He could steer right across the black a little bit better than I could to pass the lap cars. I couldn’t get up into the corners like I needed to. All-in-all we did really good. Our team has been working hard. Danny, Mark, Austin, Joel, everybody involved with this Rocket house car. It’s unbelievable to drive, hopefully, we can keep it in the top-three the rest of the season and get some more wins. It’s been fun and this track was a lot of fun tonight. It was a little bit more top-dominated than I wanted but we’ll take second place.”

Devin Moran rallied to third place after an exciting battle for the spot with Ricky Weiss and Shane Clanton. Moran started sixth in the feature and fell back to as far as 12th mid-race. After a restart on lap 29 caused by Eckert who slowed on the track, Moran charged from seventh to fifth and kept climbing forward from there.

“Once again, we were just terrible at the start of the race,” said Moran. “We fell back to 12th and then we had to pass everybody, we just worked really hard. The track was really awesome and you could throw those massive sliders and we started doing that there. A couple of guys got into my left side and it made me get up on the wheel even harder. I was trying not to deal with that so I had to get around them. I tried to catch these two upfront but they were pretty checked out… I didn’t see the white flag, I was just going as hard as I could as long as I could… Hopefully, we can carry this over to tomorrow.”