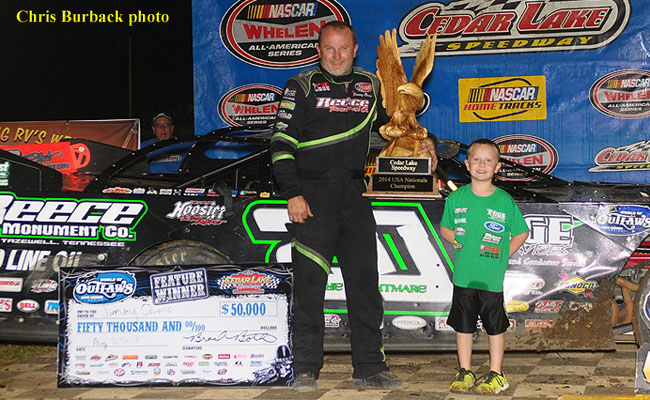 Owens, the 42-year-old veteran dirt Late Model driver from Newport, Tenn., gave up the lead three times in the 100-lap World of Outlaws Late Model Series event but battled back each time to regain the top spot en route to his first career USA Nationals victory.

The race’s most dramatic moments came in the final 20 laps when Owens raced back and forth with 17-year-old Bobby Pierce of Oakwood, Ill. The two drivers swapped the lead and swapped paint multiple times as the laps counted down before Owens finally pulled ahead for good on lap 95 and edged away to an advantage of 1.083 seconds at the finish.

“There was way too much excitement going on for me,” said Owens, whose victory came in his sixth career USA Nationals A-Main start. “To bring this race home in front of a crowd like this is pretty awesome, especially putting on a show like we did.”

Mars was the first to seriously challenge Owens, reeling in both him and Jonathan Davenport of Blairsville, Ga., who ran second for much of the race’s opening laps. Just as Mars was beginning to look under Davenport, Owens jumped the cushion in turn two, forcing Davenport to check up and allowing Mars to take second and pull alongside Owens for the lead.
Mars and Owens ran side by side for the following two laps before Mars pulled ahead on lap 17 and began to ease away. But Owens battled back, catching Mars just a handful of laps later as slower traffic came into play.

Owens pressured Mars for the next 15 circuits while Pierce worked his way into contention. It was a three-car battle for the lead by lap 30, as Owens began to pull to the outside of Mars and Pierce used the extreme low groove to look under both cars ahead of him.

Owens cleared Mars to retake the lead on lap 37, while Pierce pulled into second on lap 43. Pierce ran down Owens in traffic and was taking looks under the leader by the race’s halfway point.

Owens and Pierce ran nose to tail for the majority of the next 25 laps with Mars just behind in third. Pierce upped the pressure around lap 75 before making a bold move to take the lead on 78.

With Owens held up slightly by a slower car in turns three and four, Pierce was able to pull alongside Owens and edged ahead at the completion of lap 78. The two drivers raced door to door into turn one, where heavy contact between the two cars allowed Pierce to pull into the lead and sent Owens up the track as Mars drove into second.

Owens quickly recovered, however, and jumped to the high side as he began making up the lost ground. Owens retook second from Mars on lap 84 and set his sights on Pierce as traffic again became a factor.

The high-running Owens wasted little time moving back ahead of Pierce, catching and passing the low-running leader by lap 87. He began to pull away from there and appeared to be headed for victory before another mistake of his own doing nearly cost him the race.

With Pierce pressuring him in traffic, Owens got too high down the back straightaway on lap 94 and scraped the wall. Owens was able to correct his machine without much damage, but the lost momentum allowed Pierce to pull alongside and edge ahead at the line.

Owens again battled back on the high side, driving alongside Pierce down the back straightaway and pulling ahead after the two cars made contact in turns three and four.

The third time out front proved to be the charm for Owens, as he pulled away in the final five laps.

“It’s just good hard racing. We put on a show for the fans,” Owens said of his back-and-forth, contact-filled battle with Pierce. “I knew Bobby was real good on that bottom. Once he got by me I knew I was gonna have to do something.

“I really was (surprised) because Bobby’s really good at running that bottom. Once I got up on the top there and started rolling I thought ‘Well man, I should’ve been up here the whole time.'”

Pierce attempted to mount one final charge after losing the lead, but his run was stymied by traffic in the closing laps. He was denied what would’ve been the biggest victory of his young career but settled for a runner-up finish worth more than $20,000.

“That was one of the most exciting races I’ve ever been in,” said Pierce, who scored his third top-10 finish in three career USA Nationals A-Main starts. “To do it with Jimmy Owens just makes it that much more awesome. Coming here, I just was hoping to make the race. Finishing second, it’s just phenomenal.”

“We were both going for that spot and there’s a lot of money on the line,” Pierce said. “We don’t get many opportunities to race for money like this and to be in that opportunity, it was just good hard racing. You just gotta go for it in that situation.”

The back-and-forth battle between Owens and Pierce had Mars hoping he may be able to capitalize, but he ended up two positions shy of earning his first USA Nationals victory since 2009.

“We had a good car and got in the lead there. It kinda went away a while and then started coming back at the end,” said Mars, who was gunning for a weekend sweep after winning Thursday’s WoO LMS tune-up event and claiming both of the weekend’s NASCAR Late Model features. “They got to running pretty hard there and I thought maybe something would happen between them two and maybe I’d luck up and get this thing anyway. But it didn’t work out.”

The race was slowed by three cautions. The first appeared with two laps complete when fast qualifier Mason Zeigler of Chalk Hill, Pa., spun in turn two. A stack-up between Billy Moyer of Batesville, Ark., Brian Birkhofer or Muscatine, Iowa, and Scott Bloomquist of Mooresburg, Tenn., on the ensuing restart left Bloomquist spun in turn four. The final caution waved with seven laps complete when Chub Frank of Bear Lake, Pa., slowed on the front straightway.