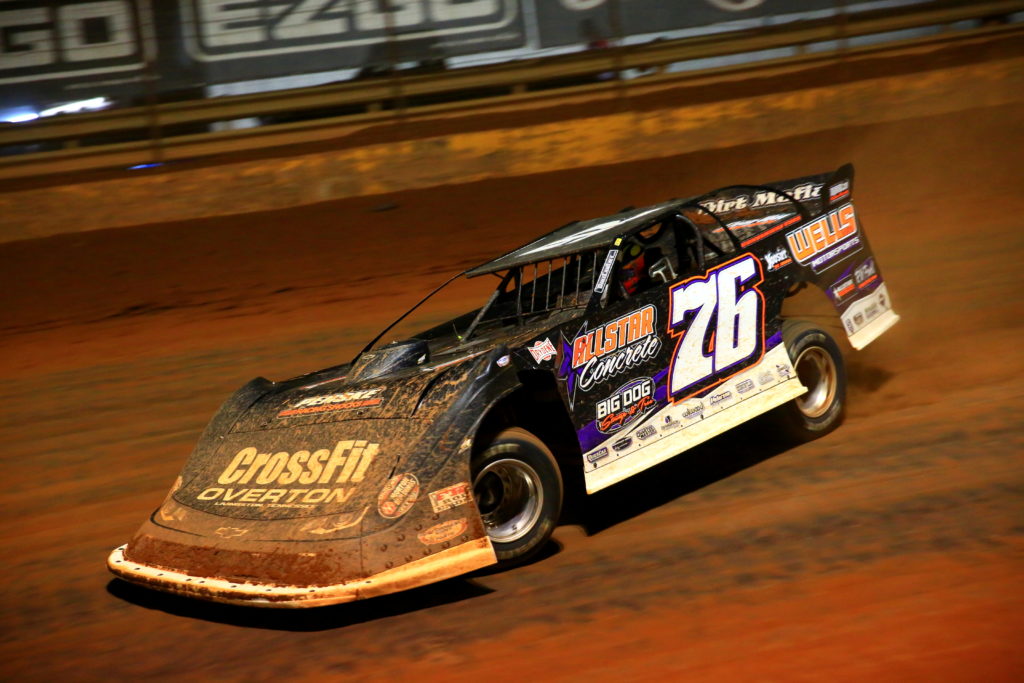 “I’m enjoying this more than ever right now,” exclaimed Brandon Overton after his latest win in a season full of conquests across the dirt late model world.

The 29-year old native of Evans, Ga. is having the most fun he’s ever had in his 15-year career; and it’s showing. With all the confidence in the world in his Wells Motorsports No. 76 team, the driver affectionately labeled as “Big Sexy” has torn across the country on a mission guiding him from victory lane to victory lane. His latest accomplishment in a long line of noteworthy achievements came on his home turf at Georgia’s Lavonia Speedway on Friday night.

Driving by the likes of Brandon Sheppard, Brent Dixon, Ricky Weiss, Zack Mitchell, and Dennis Erb Jr., Overton piloted his Longhorn Chassis entry from sixth-to-first in the opening 18 laps of the Morton Buildings Feature. Succumbing to lap traffic on lap 43, Overton handed the lead over to Erb with just seven laps remaining, but a fire was lit inside the Georgia boy and he rebounded to snatch the top spot back on lap 44 and hang on for the $10,000 score in his home state.

Building his resume night-after-night, Overton’s Friday night triumph gave him his 18th overall feature win of the 2020 season; his 10th career World of Outlaws Late Model Series win (17th different driver in series history with 10+ wins); and extended his World of Outlaws win streak to three consecutive victories to go along with his weekend sweep at USA Nationals last month.

“We’re just having so much right now,” Overton said in the pits as his crew packed the No. 76 into the hauler. “This whole team gets along so well, and I’ve got the coolest car owner in the business. I know that I’ve got a lot of pressure to perform, but they don’t ever make me feel that; and I think that’s huge. My hat goes off to Longhorn By Wells; new motor package was great tonight; and our relationship with Penske Shocks is paying dividends of late.”

While most eyes were glued to row three with Sheppard & Overton buried in the redraw, Zack Mitchell of Enoree, S.C. took advantage of the outside pole and commanded the opening 17 laps of the feature. In the midst of a stellar three-way war for the lead, fans saw Mitchell have his hands full with Dennis Erb Jr. and a charging Overton breathing down his neck. Overton eventually took the spot on lap 18 and paced the mid-to-late stages with ease.

The most chaotic moment of the night came on the lap 25 restart, which resulted in the only red flag of the evening. Restarting in third, “B-Shepp” made an ultra rare mistake on the turns one & two cushion, getting out of shape in the Rocket1 Racing No. 1 and spinning in front of the field. What followed was pandemonium. Piling in late with with heavy damage was fifth-running Chris Ferguson, seventh-running Ashton Winger, and 12th-running Darrell Lanigan. Along with those four, a whole pack of other backmarkers spun to a stop trying to avoid the melee.

Going back green, Overton didn’t receive a real challenge for the lead until ten to go with traffic approaching and Erb closing. While keeping their on the front duo of Overton and Erb, fans witnessed a rare moment with Sheppard and Scott Bloomquist both going a lap down to the race leaders. Capitalizing on the those slower cars, Erb pinned Overton in and snuck by him on the low side to lead the 43rd lap. Getting up on the wheel and quickly recovering, Overton gassed up the No. 76 and went right back to work; passing Erb back on the 44th circuit. Erb continued to hound Overton throughout the final six laps, but would run out of time in his quest to stop “Big Sexy” from keeping his hot streak alive on his home turf.

“I knew he was there,” noted Overton. “My guys were telling me to get down, get down; but I wasn’t driving that hard. I thought I had already killed my tires when I got to the lead, because I was worried about staying in front of Sheppard early on. I knew if I could do that, I could win; but if he got ahead of me, I might not win this thing. I was driving so hard, wheel-spinning real bad to try and keep him behind me. I honestly feel like if I hadn’t sat back there and rode around the middle-to-late parts, then I wouldn’t have had as much race track to use to pass Dennis back. There’s really no right or wrong, something you just get lucky.”

Falling just short of back-to-back wins, “The One Man Band” still recorded another phenomenal night and did something he hasn’t done in almost three years. With consecutive podium results at Eriez and Lavonia, this is only the third time in Erb’s World of Outlaws Late Model Series career that he’s recorded back-to-back top-three runs. The other two instances for the Carpentersville, Ill. native coming in November of 2017 and May of 2007.

“That confetti is great when you’re winning, but not that fun in second,” Erb Jr. joked in victory lane. “We had a really good run thought. I got around him there on the outside and found a good lane through the middle, but that lapper got in the way and hurt us. He’s [Overton] one of the best out there right now, so finishing second to him ain’t bad. It was fun how dicey we get tonight. A lot of hard racing, which I like.”

For Chase Junghans of Manhattan, Kans., his third-place finish was like a sigh of relief for the Shop Quik No. 18 Rocket Chassis bunch. Marking only his second podium appearance of the 2020 campaign, it was his first top-three bid in nearly two months with his last coming on July 11 at Plymouth (Wisc.) Dirt Track. The consistency, however, continues to pay dividends for the Kansas kid. With Lanigan’s unfortunate DNF, the No. 18 slipped by the No. 29V to take over the fourth spot in the championship standings.

“Man, it feels like forever since I’ve been up here on this podium,” a relieved Junghans let out on the front stretch. “We’ve just been plugging away, night-in and night-out. Our car hasn’t been that good for, shoot, the last six months. We’ve been working hard though and it’s starting to pay out. We’re heading the right direction now.”

Ricky Weiss of Headingley, Man. collected his 16th top five finish of the year aboard the Drydene Performance Products No. 7, slightly knocking down Sheppard’s championship lead following his misfortune. Closing out the top five was early leader “Kid Quick” Zack Mitchell with his third career top five finish in World of Outlaws competition.

Closing out the top ten at Lavonia on Friday night was “Downtown” Michael Brown in the sixth spot; Ross Bailes with a hard-charging effort from 19th-to-seventh in the Big Frog Motorsports No. 58; local Brent Dixon of Elberton, Ga. with an eighth-place finish; “Thriller” Cade Dillard with a resurgent 18th-to-ninth bid to salvage his tough night; and Nick Schlager of nearby Royston, Ga. with a career-best tenth-place run.

The 2020 World of Outlaws Morton Buildings Late Model Series season rolls on with a Saturday, September 5 stop at South Carolina’s Lancaster Motor Speedway. With only nine races remaining, every night is a crucial part in deciding every point, position, and payout for the championship standings. Hot Laps are slated for 7:00pm ET on Saturday at Lancaster. If you can’t make it in person, watch Every Lap LIVE at DIRTVision.