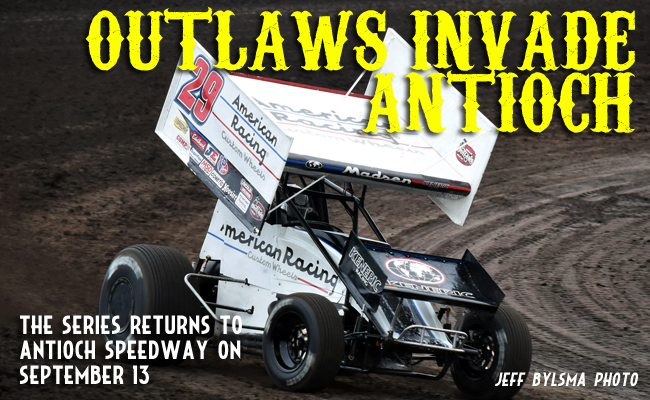 Antioch, CA – August 26, 2015…The always action packed & unpredictable Antioch Speedway will play host to the “Greatest Show on Dirt” in just a couple short weeks, when the World of Outlaws Sprint Car Series converges at the track on Sunday September 13.

The night of racing will also be your final chance to catch the World of Outlaws in the Golden State this season, with it capping a big week of racing for the tour that begins in the state of Washington.

“I felt like I was running comfortably and managing traffic pretty well, but I just got bottled up there and he got a run,” Madsen said. “I was pretty lucky to get away with that one. You definitely had to maneuver through traffic well, because cars were everywhere during the main event.”

Of all the tracks that the World of Outlaws compete at in the Golden State, Northern California drivers have seemed to make the most noise at Antioch Speedway against the Greatest Show on Dirt over the last handful of years.

In the 2012 event Allard led the first 28-laps of the feature, only to have Donny Schatz sneak by on a green-white-checkered restart. Tim Kaeding however, executed a picture perfect slide job on Schatz in the final corner to claim a thrilling victory. Allard would round out the podium. The inaugural series event at Antioch in 2011 saw 20-time WOO champion Steve Kinser pick up the win, but only after holding off a hard-charging Larson, who blazed through the field from 14th starting.

As always it will be a tall order, with the World of Outlaws being led into town by Schatz, who is recently coming off his ninth career victory at the prestigious Knoxville Nationals. The Fargo, ND veteran has captured 25 wins as of press time. Bixby, OK driver Shane Stewart has also had a tremendous season, having claimed seven victories so far and currently ranking second in the standings. Madsen, Saldana and Sweet round out the top-five in points going into this weekend’s Oil City Cup in Canada.

Tickets for the Sunday September 13 event are on sale and can be acquired by visiting http://dirtcar.ticketforce.com/ordertickets.asp?p=570&backurl=default.asp or by contacting 1-877-395-8606. General admission tickets cost $39, while reserved grandstand seats cost $45. Children 12 & under are $15 in general admission. A free fan pit pass will be available to those that purchase a reserved seat.