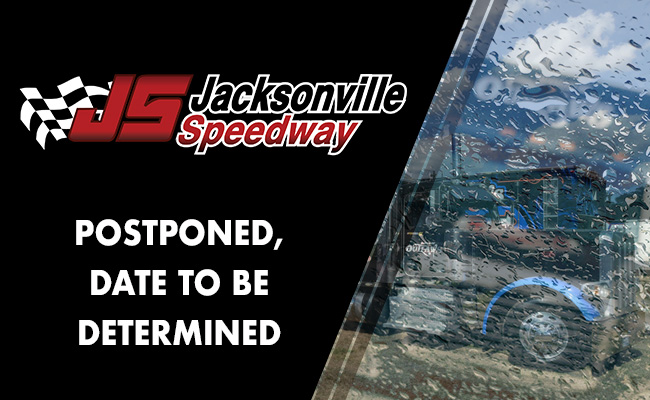 JACKSONVILLE, IL – A new track record. Wrecks in qualifying. And hard racing in the Drydene Heat races. All were leading up to a thrilling 40-lap Feature Sunday night at Jacksonville Speedway, but then heavy rain fell.

World of Outlaws NOS® Energy Drink Sprint Car Series and track officials were forced to postpone the remainder of the event, which still had the Last Chance Showdown and Feature to go.

Series and track officials are looking for a reschedule date. Make sure to watch WorldofOutlaws.com for updates.

Race Fans that attended the race should hold on to their wristband for the makeup Feature. If you have any further questions, call the speedway at (217) 207-3005.

With 42 cars in attendance and a packed house at the speedway, the night started with NASCAR-star Christopher Bell setting a blistering sub-10 sec. lap in Hot Laps – 9.887 sec., a second faster than Logan Schuchart’s 2016 record setting lap of 10.805 sec. With the lap coming in Hot Lap, though, it was not considered an official new track record.

That honor would go to Aaron Reutzel. He set a 10.028 sec. lap in Qualifying, making him the fastest overall and the new Jacksonville Speedway track record holder.

“We were fortunate enough to draw good and not go out too late,” Reutzel said after claiming the new track record. “The track definitely fell off there.”

The event then moved into four thrilling Drydene Heat races. Reutzel continued to show his speed by winning the first Heat. Three-time Series champion Sammy Swindell and rookie Carson Macedo had a fierce battle to the finish of the second Heat with Swindell coming out on top. Schatz won the third Heat and David Gravel won the final Heat with Brent Marks finishing second, from 10th.

The final Heat was the start to Marks’ comeback story, after crashing in Qualifying and not making a lap. His strong Heat race run put him in the DIRTVision Fast Pass Dash. He grabbed the lead at the start of the Dash and set sail for the checkered flag, claiming his first Dash win of the season.

The Last Chance Showdown was on track to follow the Dash, but Mother Nature decided to let rain fall once again ending the night.

The Greatest Show on Dirt will make its next stop Friday, May 3, at Riverside International Speedway in West Memphis, Ark., and Saturday, May 4, at Tri-State Speedway in Haubstadt, Ind.