Outlaws vs. Posse: Round One at Lincoln Speedway on Wednesday, May 16 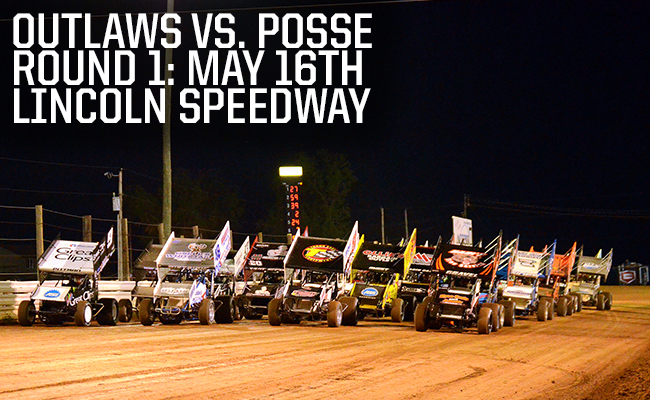 CONCORD, NC – May 3, 2018 – The World of Outlaws Craftsman Sprint Car Series and the Pennsylvania Posse will begin a season-long battle for supremacy at Lincoln Speedway on Wednesday, May 16 with the running of the Gettysburg Clash. The biggest rivalry in dirt racing takes center stage as the locals try to protect their home turf against the Greatest Show on Dirt.

There’s just something about the Posse vs. Outlaws conversation that ruffles some feathers in the Sprint Car world. Whether it be the infamous Beer Hill Gang causing ruckus or a Victory Lane comment from a winning driver, these shows never lack entertainment, and the 2018 edition of the rivalry will kick off at Lincoln.

Outlaws Logan Schuchart and Jacob Allen cut their teeth in Central Pennsylvania and relish the opportunity to race in their home state. “I love racing in Pennsylvania, especially at Lincoln. It’s an awesome race track, and the stands are always packed,” said Schuchart coming off two straight top-five finishes at Devil’s Bowl.

Schuchart’s teammate, Jacob Allen has turned heads in 2018 and also loves racing at home. “It’s always nice to sleep in your bed and race in front of your family, friends and sponsors,” Allen said. “We race all over the country, so we look forward when get to race so close to home.”

Since returning to Lincoln in 2012, the Outlaws and Posse rivalry has been highly contested. The Pennsylvania Posse has won four events to the Outlaws’ three, but the traveling elite have won the event the last two years with the Gettysburg Clash going to Donny Schatz in 2016 and David Gravel last year. Daryn Pittman picked up the victory in July of 2014 with Posse victories going to Danny Dietrich (twice), Greg Hodnett and Stevie Smith, the son of the original Outlaw winner at Lincoln.

Tickets for the opening round of the Outlaws vs. Posse are available here. If you can’t make it to the track, be sure to watch all the action LIVE on DIRTVision.com!