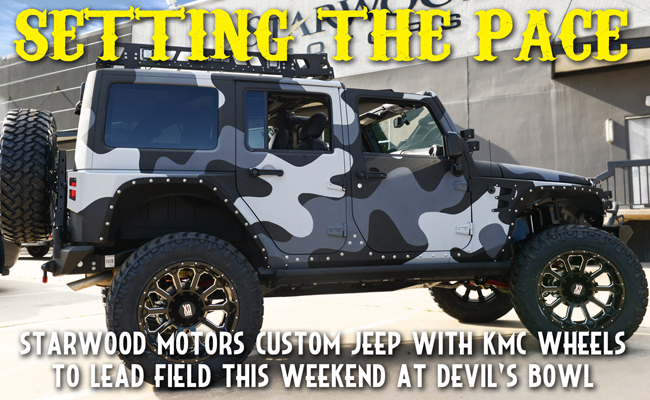 Field continues to grow for this weekend; rule added for drivers injured in dash

“We are very excited to join our partner KMC Wheels to display our exclusively built Jeep conversions to the World of Outlaws audience, and be a part of a great community event,” said Anooj Thakker, Interactive Manager for Starwood Motors Dallas.

“These highly modified machines not only perform off-road, but also serve as a comfortable, easy-to-drive daily driver,” said Jacob Bair of KMC Wheels. “The craftsmanship and quality of a Starwood Motors Custom is unequalled. I can’t wait to see the heads turn.”

Starwood Motors is Dallas’ most-trusted pre-owned car dealer and customization shop. From basic family cars to the most luxurious vehicles in the world, every car at Starwood has been carefully detailed and refurbished to be like new. Starwood is one of only a few dealers in Texas licensed to sell all makes and models of both new and pre-owned vehicles. For more on Starwood Motors, visit www.starwoodmotors.com.

RULE AMENDMENT: During the Thursday night event at The Dirt Track at Las Vegas Motor Speedway in March, Joey Saldana transferred to the A-main, as well as the dash, through his heat race. Saldana was subsequently injured during the dash and advised by on-site medical personnel to seek further attention. He was transported to a local hospital for examination, meaning he was unable to start the A-main.

That night, following series rules, Saldana was awarded non-transfer driver points (75) in the championship while his team used a replacement driver to start the A-main and pull off after the green flag waved to receive last-place A-main points (102) in the team standings.

After a thorough review of the situation, the World of Outlaws determined the rule was flawed, as it pertained mainly to drivers who had not already qualified for the A-main. Therefore, an updated guideline will be added to the rulebook stating a dash car or driver that cannot start the A-main due to crash or injury will be awarded a last-place A-main finish. In addition, Saldana will be awarded the difference between the non-transfer points he received and last-place points in the A-main, a difference of 27 points that will be added to his total in the championship standings.

WHEN, WHERE, HOW MUCH? Answers for many questions about this weekend’s event at Devil’s Bowl Speedway, including the schedule and ticket prices, can be found on the World of Outlaws STP Sprint Car Series website and the specific event page for the Texas Outlaw Nationals presented by American Racing Custom Wheels by clicking www.WoOSprint.com/Texas-Outlaw-Nationals.