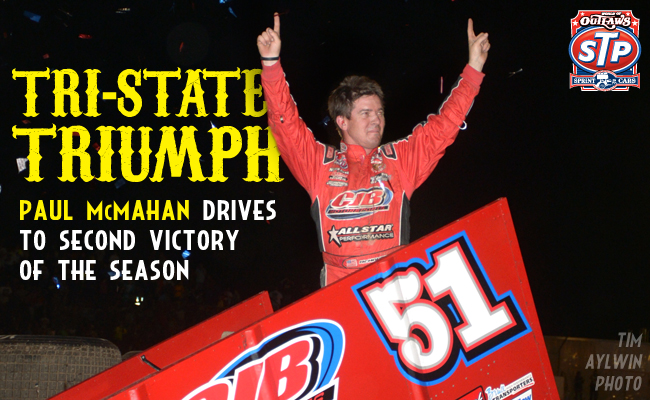 HAUBSTADT, Ind. — May 10, 2014 — Paul McMahan held off Steve Kinser on a wild Saturday night at Tri-State Speedway to earn his second World of Outlaws STP Sprint Car Series victory of the season, and the first win of his career at the historic quarter-mile dirt oval in southwestern Indiana.

Packed grandstands were buzzing when legends Steve Kinser and Sammy Swindell earned front-row starting positions for the 40-lap main event. Joey Saldana and McMahan lined up a row behind them and gave chase when the green flag waved.

Swindell jumped out quickly on the high-side of the track while Kinser tried to make the bottom lane work to his advantage. Swindell’s momentum carried him into the lead with Kinser in tow. It took only five laps for Swindell to catch the tail of the field, then four laps later he was trying to pass his brother, Jeff Swindell, when the two made contact at the end of the front stretch. Just like that, Sammy Swindell’s shot at winning was over. Unfortunately, Saldana was right behind the crash and couldn’t miss it. Both Jeff Swindell and Saldana were able to restart as Kinser moved to the point.

McMahan and David Gravel, who finished second last year at Tri-State, chased Kinser back to green while the three-car Kasey Kahne Racing team of Cody Darrah, Daryn Pittman and Brad Sweet all battled for position right behind the leaders.

On the restart, Kinser again tried to make the bottom work in his Tony Stewart Racing Bad Boy Buggies car while McMahan sailed around the cushion on the top of the track in his CJB Motorsports machine. McMahan tried to extend his lead, but it didn’t take long before he was in heavy traffic, letting Kinser keep close.

Kinser was reeling McMahan back in as they were setting up for the final 10 laps when the caution flag waved once more, this time for defending series champion Pittman, who had gotten sideways in turn 4.

McMahan, a Calfornia native who now lives near Nashville, Tenn., went to the top again on the restart and made it work when just four laps later Brad Sweet spun to a stop in turn 2 with 33 laps in the books. The ensuing restart gave Kerry Madsen and his 11th-starting American Racing Custom Wheels car the chance to catch and pass Gravel for third.

With five to go, a final caution waved when Critter Malone, who had raced all the way from 21st into the top five, made contact with Darrah, which led eventually to Malone collecting Paul May and Jacob Allen, bringing out the caution for a fourth time.

By this point, McMahan’s nerves were certainly wary about what kind of move Kinser would make. It was an electric night in which the track celebrated Kinser’s “Salute to the King” tour during opening ceremonies. Kinser would love nothing more than to earn his ninth Outlaw victory at a track where he’s made so much history.

McMahan, though, was determined to make a little history of his own. He charged back to the lead and with clear track opened as big a lead as he could to cruise to his second victory of the season and the first of his career at Tri-State Speedway.

Madsen finished third, Gravel was fourth and Saldana, who was caught up in that first incident with nine laps complete, came from the back to finish fifth.

“I love this place, I’ve been coming here a long time,” said an emotional McMahan, who celebrated the win with a number of friends and family in attendance. “Sammy had a real good car. Of all the people for him to get caught up with, he got caught up with his brother. Once I got to the outside of Steve I thought I might have a shot at it. Then all those restarts, they scared the crap out of me. I was just waiting for Steve to come flying in there because he had nothing to lose. That curb is awful big and on that last restart I kind of got on top of it, but I don’t think Steve gave me a big slider and I was able to gather it back up and get back out there. I knew once I got a lap in I would be pretty hard to pass.”

Kinser no doubt was pushing as hard as he could for another victory at Tri-State in front of a crowd that was definitely hoping to celebrate a win for the King of the Outlaws.

“I let everybody down including myself,” said Kinser, of Bloomington, Ind. “I did all I could do, I just took the wrong spot a couple of times. I thought the bottom was better but I couldn’t get it turned and twisted back down there, just ran second, that’s all I can say.”

Kinser was aware that first Swindell, then McMahan were gaining the advantage on the high side of the track, but he was committed to running the lower groove.

“That’s what I did, I killed my tires, got them all blistered up and got to shaking on the second to last yellow. I let everybody get back out in front of me and up on the top. I had to try something so I ran the middle and that just killed my tires.”

Madsen was just pleased to be on the podium after starting mid-pack.

“I was pretty ugly early, I didn’t know where to put it,” said Madsen, of St. Marys, New South Wales, Australia. “Once I figured out how to drive the thing I was running a slide job line and I got some good restarts that worked for me. As the race progressed I got better and better. I felt like I could have had run at Steve there at the end, but if something went bad half of southern Indiana would have been after me in the pits so we’ll just take a third and call it good.”

With 24 races and 13 different winners in the books, the World of Outlaws STP Sprint Car Series invades Pennsylvania on Wednesday for the Gettysburg Clash at Lincoln Speedway then rolls Friday and Saturday into Williams Grove Speedway.