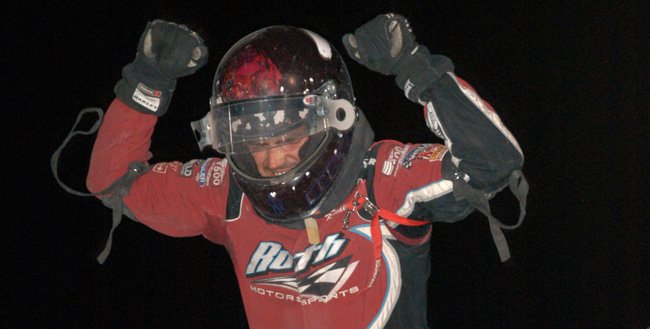 In a way, he did. The Californian outlasted a furious battle with Jason Sides and an onslaught of cautions to claim the $10,000 World of Outlaws victory at The Dirt Track at Las Vegas Motor Speedway

on a windy Thursday night.

It was his seventh career World of Outlaws feature win and his first since April 24, 2009, at Riverside International Speedway in West Memphis, Ark. And Kaeding celebrated in style.

With fists pumping and several shouts, Kaeding drew a loud cheer from the packed crowd when he hopped out of his car on the fronstretch, hugged almost anyone in sight and climbed on the back of the high-powered race car with his arms held high.

“We weren’t even expecting to come here,” the reigning King of California said. “About a week and a half ago we made the decision to come.

“It’s a hard-fought battle when you can start up front and stay up front with the Outlaws. They’re definitely fast on the half miles. Tonight we just got lucky. We just went out, had a lot of fun and enjoyed ourselves.”

Kaeding qualified sixth quickest and finished second in his heat race to earn a spot in the dash. The invert for the dash was “six”, giving Kaeding the pole. He led all six laps to earn the pole for the feature, which he then commanded for all but two of the 30 laps.

However, it was anything but easy. Kaeding survived nine cautions, including one on the opening lap when Brian Brown jumped the start from his 21st starting position. He was penalized a row on the restart.

Kaeding and the rest of the field were slowed on the third lap for a caution by Sammy Swindell, who sustained a flat left front tire. Swindell restarted last – 24th.

Chad Kemenah, who opened the night as the fastest qualifier with a lap of 15.093 seconds, took the lead for the seventh and eighth laps before Kaeding regained the top position in lapped traffic entering turn three on the ninth circuit.

Jason Meyers brought out a caution on lap 10 as he came to a spinning stop because of front end damage. He then stopped on lap 23 with a similar issue and NASCAR star Tony Stewart was forced pitside because of a flat right rear tire.

Kerry Madsen’s flip in turn one on the restart prompted a red flag. Two laps later, Terry McCarl spun in turn two for the fifth stoppage and Lucas Wolfe ran out of fuel on lap 26 while running fourth. Second-running Kraig Kinser had a flat right rear tire, but elected not to pit and therefore be forced to the back. However, he brought out a caution with two laps remaining because of the flat tire.

Sides, who maintained a close second for most of the second half of the race, dove under Kaeding for the lead entering turn one on the restart. However, Sides slide up the track and Kaeding drove underneath as the duo exited turn two.

“Our car was good. I don’t know that we could have done much better setup-wise or anything like that. We needed longer green-flag runs. It seemed like we were better on longer runs rather than those little short runs.”

Kaeding regained the lead and the final caution came as he received the white flag when Cody Darrah spun out in turn four.

Kaeding again pulled to a good advantage on the restart and held on for the victory with Sides a close runner-up. Steve Kinser, who started 14th, charged to third.

“We passed a lot of cars, got by a few on a restart,” he said. “To get a third after starting 14th, I can’t complain.

“There at the end, once we got strung out the first couple of laps, the only guys probably making up time were guys that had come in and already had new tires on their right rear.”

Kemenah was fourth and Brown worked his way back to fifth, which earned him the Hard Charger Award.

Swindell, Meyers and Stewart overcame their issues to finish sixth through eighth, respectively. Donny Schatz, who started 16th, was ninth and Kraig Kinser drove from 20th to 10th in the final two laps after his caution for a flat tire.

The World of Outlaws will compete next on Saturday in the NAPA Know How SoCal Showdown at Perris Auto Speedway in Perris, Calif.

Click on this page throughout the night for live updates, including lineups and results for qualifying, heat races, the dash and main events. We will also provide any weather updates when necessary and other interesting tidbits from the pits.

(12:23 a.m.) Tim Kaeding survived on a dry track to claim the victory with Jason Sides finishing a close second. Here are the results:

(10:37 p.m.) The horn has just sounded, signaling that feature cars should get ready.

(10:15 p.m.) The Last Chance Showdown is going out now. All six drivers will advance to the feature and the top four will get their qualifying time back.

(9:59 p.m.) After flipping in their heat races, Jac Haudenschild and Logan Forler have both scratched for the rest of the night.

(9:45 p.m.) The invert for the dash is a 6, meaning fast qualifier Chad Kemenah will start sixth. Here is the lineup for the six-lap dash:

(9:42 p.m.) Bill Rose and Trey Starks are on the front row of the eight-lap Last Chance Showdown. The top six transfer. Here is the lineup:

(9:39 p.m.) Craig Dollansky wins the third and final heat race. Tim Kaeding was second and will also be in the dash. Here are the results:

(9:27 p.m.) Logan Forler got upside down on the second lap of the third heat race. He climbed out of the car. Craig Dollansky is in the lead while polesitter Tony Stewart fell to fourth. Tim Kaeding is second and Jason Meyers third.

(9:19 p.m.) Kerry Madsen claimed the second heat race as Jac Haudenschild clipped the fronstretch wall on the final lap. He flipped several times, but is out of the car and ok. Jason Sides finished second to earn a place in the dash. Here are the results:

(9:14 p.m.) Jason Johnson has a flat right front tire on lap seven of the second heat race. He’s in the work area. Polesitter Kerry Madsen is in the lead.

(8:39 p.m.) The countdown has started for the drivers. Heat races are up next.

(7:54 p.m.) The National Anthem is next and then the World of Outlaws will start qualifying.

(7:51 p.m.) Sorry I missed the individual hot lap leaders. Sammy Swindell was the quickest overall with a lap of 15.528 seconds.

Also, Dustin Morgan is a scratch for the night.

(7:09 p.m.) The track was fairly wet, but it’s finally been run in so the racing action is about to begin. Still awhile before World of Outlaws hot laps.

(6:11 p.m.) They are calling for drivers to put heat in their engines.

(5:50 p.m.) Here is the qualifying lineup, which will also serve as a roster:

(5:14 p.m.) The autograph session just finished and some of the drivers are putting heat into their engines. There are 27 cars here and they’ll each get two qualifying laps. After qualifying, there will be three, eight-lap heat races inverted by four. Therefore, the top qualifier starts fourth in the first heat, the second quickest starts fourth in the second heat, etc.

(4:19 p.m.) The driver’s meeting just wrapped up. It looks like we have about 27 sprint cars here for the World of Outlaws event. There is about to be an autograph session behind the grandstands for a half hour. Hot laps should start around 7:10 p.m. with qualifying shortly after 7:30 p.m.

(1:41 p.m.) We’re at The Dirt Track at Las Vegas Motor Speedway to start the West Coast swing throughout the month of March. It’s a beautiful 70 degrees and sunny with strong winds.

The cars are rolling into the pits and I’d expect to see around 25 sprint cars here tonight. The driver’s meeting is at 4 p.m. and qualifying is tentatively set for 6 p.m.