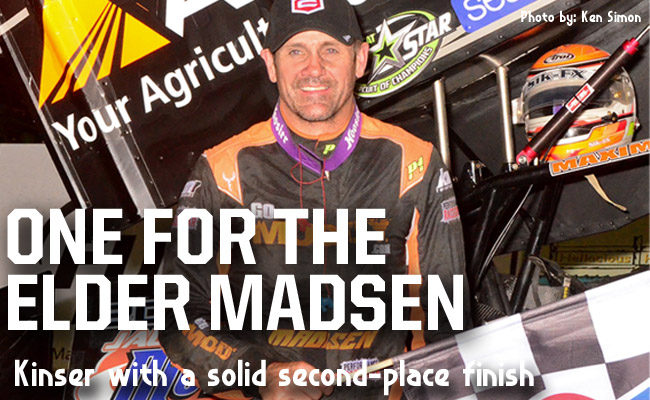 JACKSON, Minn. — June 2, 2017 — Kerry Madsen was part of a historic finish on the opening night of the 39th Annual AGCO Jackson Nationals for the World of Outlaws Craftsman® Sprint Car Series at Jackson Motorplex, finishing second to his brother Ian, which made them the first-ever Australian-born brothers to finish 1-2 in an Outlaws race. K. Madsen felt as if he didn’t get the job done, though on Thursday night. He made up for the near-miss on Friday night, leading flag-to-flag in the 25-lap main event to earn his first World of Outlaws Craftsman Sprint Car Series win of the season and the 20th of his career.

Madsen withstood a trio of yellow flags and one red flag period en route to the win. For the native of St. Marys, NSW, Australia, who now calls Knoxville, Iowa home, it was his second win of the season at Jackson Motorplex, which is owned by his car owner, Tod Quiring.

“The car was working everywhere until we lost the front wing, then we lost our front downforce,” said Madsen. “I had to run not as hard as I wanted to going into (turn) one and gave up a lot of speed there. I just kept watching the front wing and it was still on so, I kept trying harder. I saw Kraig and thought, ‘Oh no,’ but I saw the lapped traffic and knew if I could get to the outside of the lapped traffic it would block the lane and I would be okay. I was just hanging on at the end and it was a handful in (turn) one and two. It was great to get the job done tonight.”

Madsen, who entered the night as the overall event point leader, put himself in a very solid position to go for a repeat in the AGCO Jackson Nationals, which he won for the first time last season.

“This track is all about being in the right place and being in the right line,” explained Madsen. “You can’t just stick to a line. You have to constantly search and keeping your eye out. It’s going to take 30 good laps to be in contention again tomorrow.”

Madsen started on the pole Friday night and jumped to an early lead, when the red flag flew for his brother, getting upside in turns three and four on the opening lap. On the complete restart, K. Madsen again jumped to a lead, with Jason Johnson in second. Johnson tried a huge slide job, going for the lead on the lap-5 and spun, which brought out the caution. Madsen chose the low side of the track each time on double file restarts, with Kraig Kinser lining on the outside and was able to open a quick gap each time.

Kinser was able to pull alongside Madsen coming off turn four with five laps to go, but the latter was able to pull away on the front straightaway to retain the lead. Kinser, who started sixth, earned his best World of Outlaws Craftsman Sprint Car Series finish of the season in second.

“I was trying to follow him and stay as close as I could in (turns) one and two,” said Kinser. “He was pretty good in one and two and always kept a little gap. The closer I got to him the worse the handling got, going through those bumps. I had a couple of chances at him, but he kept motoring around. The little bit I could gain in (turns) three and four he just motored down the straightaway and kept it nice and straight. It was tough and I was going to need some help. I saw traffic down low and knew I probably wasn’t going to get him.”

Brad Sweet finished third for the second straight night. After having trouble in the dash, he lined up eighth and found himself in third by the fifth lap of the race. He was able to gain some ground on Kinser in the middle stages of the race, but in the late going fell back a bit.

“We just have to keep working on it,” said Sweet. “Kerry (Madsen) is fast. We had that problem in the dash and that set us back. It’s nice to come from eighth to third. We got to third pretty quick and I thought we may have something for those guys. My car just didn’t feel as good those last few laps. We’ll take some good notes tonight and the big night is tomorrow night. I think we are in a good position and have had a solid two nights and should be in the top-four in points. We’ll come back tomorrow night”

Donny Schatz finished fourth for the second consecutive night, with Jason Sides rounding out the top-five. Daryn Pittman crossed the line sixth, followed by Shane Stewart in seventh. Stewart, who started 20th picked up the KSE Hard Charger Award. David Gravel was eighth, with Joey Saldana ninth and Johnson rebounding from the early spin to charge back through the field to finish 10th.

The 39th Annual AGCO Jackson Nationals wraps up on Saturday, June 3 with a $25,000-to-win main event for the World of Outlaws Craftsman Sprint Car Series.

Tickets for the remaining two nights of the 39th Annual AGCO Jackson Nationals, featuring the World of Outlaws Craftsman Sprint Car Series, along with the Upper Midwest Sprint Car Series (UMSS), Midwest Sprint Touring Series (MSTS), Nebraska 360 Sprint Series and the RaceSaver IMCA Sprint Cars at the Jackson Motorplex can be purchased online at slspromotions.ticketforce.com and at the track.