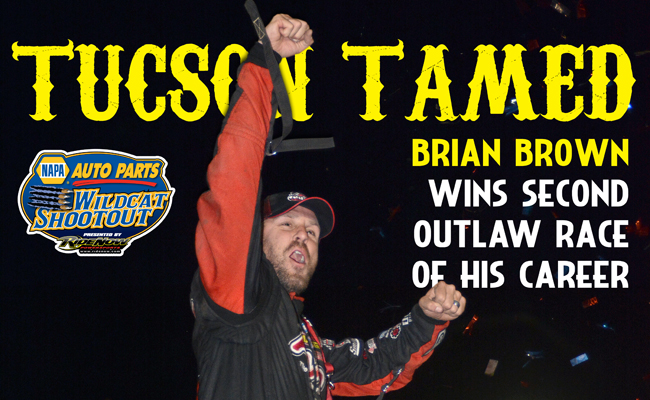 “To win two of the last four Outlaw races we’ve been at – it took us forever to win the first one and it’s awesome here to win the second one,” Brown said.

Brown was up front throughout Saturday night’s event. He qualified in fifth and finished second in his heat and Dash (both to eventual polesitter Brad Sweet). When the green flag flew, Brown jumped to a quick lead. As he weaved his way through lapped traffic, he held off attempts by Brad Sweet and Shane Stewart to close the gap.

When the checkered flag flew, it was Brown crossing the finish line in first.

“Just proud of our whole team. I knew I had to hit my marks and we did it,” Brown said. “I said it earlier but thanks to all you fans for coming out… you can choose what you do with your money, just choose it here with the Outlaws – we really appreciate it.”

The win was a boost for Brown who entered the night after a disappointing run with his FVP/Casey’s General Store team on the second night of the FVP Outlaw Showdown at The Dirt Track at Las Vegas Motor Speedway on Thursday night.

“I kind of screwed up there Thursday at Vegas and put it in the tires and I was kind of down in the dumps,” Brown said. “[My Crew Chief Chad Morgan] said, ‘you know what, don’t worry about it.’ Here we are.”

Six races into the season, Brown is the sixth different driver to stand in victory lane. Joey Saldana expanded his championship points lead over second place Brad Sweet to nine

Second place finisher Shane Stewart struggled in the opening laps, falling back to sixth as the field rounded the track for the first time. By lap eight he had worked his way back to fourth and was challenging Danny Lasoski for third. As the two drivers came off turn four onto the front stretch, Stewart cleared Lasoski to take over the third spot. Lasoski tried to battle back but was not able to get around the Larson Marks Racing/Kick-It car.

After a bobble in turn four on lap 19, Stewart let Sweet get back by.

“We were able to put ourselves in a good position there,” Stewart said. “I was able to get by Brad and then nearly gave it away there and then got back by him.”

Stewart battled back and finished the night in second.

“We’re obviously out here racing for points, so anytime you can finish in the top three it’s a darn good night,” Stewart said. “Steve made a tire selection there and I think we were all a little nervous about it except him. That’s his confidence and we obviously picked the right tire. Brown just got a good start and he was able to keep it out front.”

Stewart rounds out the first week of the Outlaws West Coast swing with a win and a podium finish. He currently sits fourth in the championship standings, 15 points out of the lead.

“We’ve had a good week,” Stewart said. “I’m really proud of my team and we’re going into the Western swing with a lot of confidence.

“I just didn’t get the start,” Sweet said. “(Brown) had a little bit more track up there on the top and I kind of knew that… Just didn’t really drive a great race but the track conditions didn’t play into our favor either. It wasn’t the most fun race but podiums are important. It’s a long season and we like to get up here.”

The Kasey Kahne Racing with Mike Curb driver is currently second in the championship standings, nine points out of the lead.

The World of Outlaws Sprint Car Series continues its West Coast swing at Thunderbowl Raceway in Tulare, Calif. on March 13 and 14. Tickets are still available at http://www.WorldofOutlaws.com/Tickets or by calling 1-877-395-8606. Watch and listen live on http://www.DIRTVision.com and follow live timing and scoring at http://www.WoOSprint.com/live-scoring.