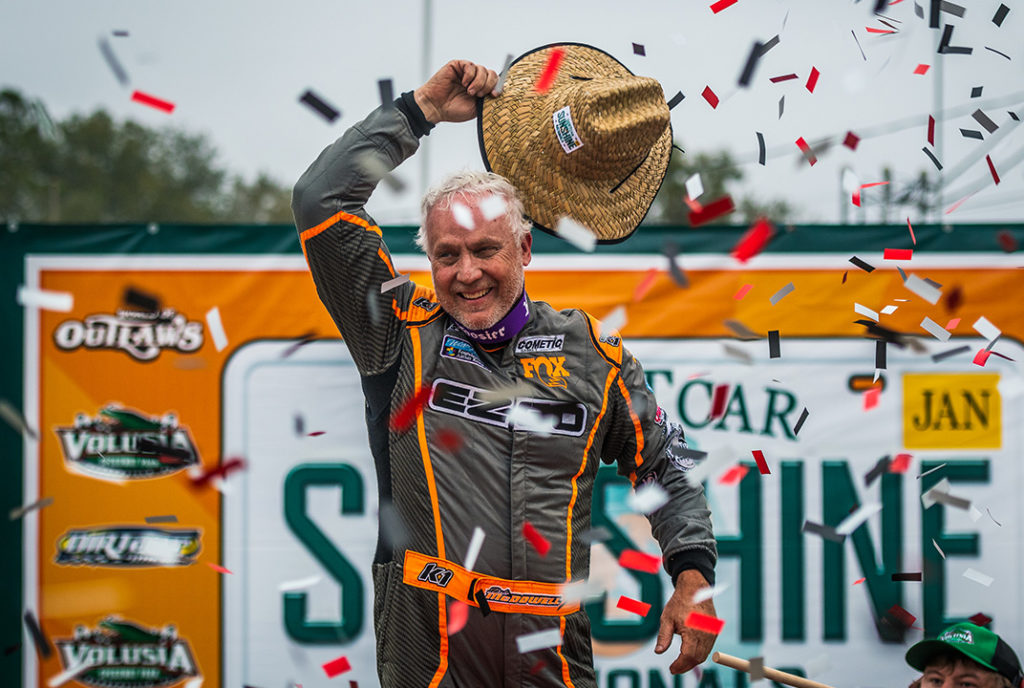 After four months of being out of a race car, Dale McDowell got to ring a victorious bell Friday evening at Volusia Speedway Park – its significance twofold.

It was a bell rung with a straw hat and a checkered flag, signifying his victory during the World of Outlaws Late Model season-opener at the Sunshine Nationals. But also, to further signify his victorious battle with cancer.

McDowell, 55, of Chickamauga, GA, was diagnosed with prostate cancer and unsure if he’d ever race again. However, after surgery, support and four months of recovery, McDowell won. And in his first return behind the wheel of a Super Late Model, he proved to everyone – and himself – no speed was lost.

“I want to be tough,” McDowell said. “I realized you need to be tough. But it’s very emotional. I have to thank the good Lord above for letting me come back and do what I love because four months ago I didn’t know what was going to happen. I haven’t been in a car in four months.

“Hats off to my brother. Everyone who took care of me while I was sick and stuck by us.”

He kicked off the weekend qualifying third fastest in Group A, behind rookie contender Kyle Hammer who was fastest overall. Then, he went on to win his Heat Race and draw the pole for the 30-lap Feature.

When the green flag flew to commence the 2022 season for the World of Outlaws Late Models Friday evening – after being postponed from Thursday night – McDowell darted ahead of the stout field with outside polesitter Devin Moran hanging to his outside. The two dueled side by side for the opening lap before McDowell’s precision around the bottom lane prevailed.

Once the black #17m found clean air out front, McDowell never looked back.

Four cautions plagued his journey around the half-mile track and put the hungry field of drivers to his bumper each time. However, none of the contenders who stepped up to the plate could match McDowell’s speed.

Moran’s attempt faded early as Chris Madden and Dennis Erb, Jr. got by him to move into the runner-up and final podium spot, respectively, before the end of Lap 3. Madden held the runner-up spot for 10 laps with no advances on McDowell. After a caution with 18 laps to go, Erb bested “Smokey” on the restart and powered his way through the corner to move his blue #28 machine into second.

But, like those before him, couldn’t catch McDowell and had to settle for a strong points run to open the season.

“To get a good start down here, we’ve got about seven races or so (between Sunshine Nationals and DIRTcar Nationals). We have to make the best out of it and come out of Florida with a good run in the points. To have a good start here is real good. Hopefully, we can keep it up here for the rest of the week.”

Behind Erb, 2021 NASCAR Cup Series champion Kyle Larson was on the move, making his way from 11th to the podium with 10 laps to go. He tried to challenge the Series veteran in the closing laps for the runner-up spot but remained third at the line.

Also on the move throughout the race was Fox Factory Hard Charger Hudson O’Neil, having raced his way from 18th to fifth.

“All in all, I think we had a good race car,” O’Neil said. “To be able to drive all the way up there was really good. We picked up most of our time on restarts. I don’t know if our race car was amazing, we didn’t really pass a whole lot of people while racing, just on restarts off of mistakes and stuff. All in all, we’re happy with how everything turned out, and we’ll keep digging.”

For McDowell, the $10,000 victory was his 13th career World of Outlaws win and his first with the Series since 2016. However, its significance will triumph all other milestones.

“I just can’t tell you how ecstatic I am to be here,” McDowell said.

UP NEXT
The World of Outlaws Late Model Series returns tonight for the second round of the Sunshine Nationals at Volusia Speedway Park. If you can’t make it to the track, you can watch all the action live on DIRTVision.

Tickets for the Sunshine Nationals are available at the track or by clicking HERE.