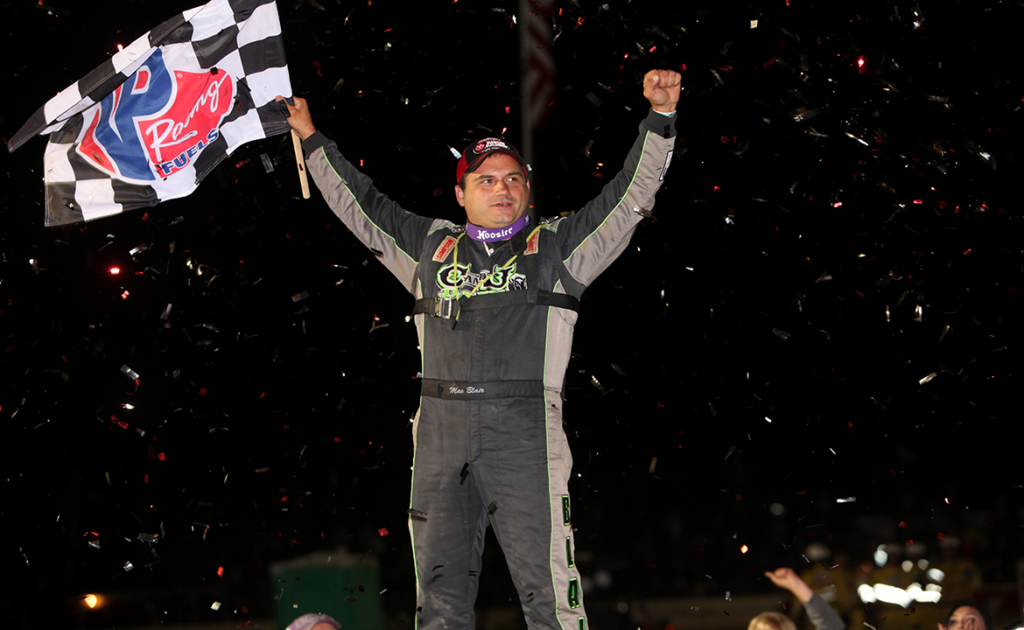 JAMESTOWN, NY – A sea of his fans dressed in black-and-green racing apparel adorned with the locally famous “111” graphics on them filled Victory Lane. Newly crowned two-time Stateline Speedway Super Late Model Track Champion Max Blair had just beaten the Outlaws at their own game, a clean sweep of the night.

Blair turned the quickest lap of 27 cars in Qualifying to pick up the first PFC Brakes Fast Time Award of his career, which set him up for a win in Drydene Heat Race #1. Redrawing the pole, Blair went on to lead every lap in a dominating display of driving skill and lapped traffic navigation for his second-career World of Outlaws Morton Buildings Late Model Series Feature win over Darrell Lanigan and Dave Hess.

“This isn’t just the cherry on top, this is the whole sundae,” Blair said of the win and how it sits alongside his 40 other Feature victories behind the wheel of a Late Model this season.

But it was certainly no cakewalk. Blair jumped out to the lead right away and ran into lapped traffic inside of the first 15 laps. He swiftly weaved in-and-out of the slower cars, using both lanes, even threading the needle in between two cars at one point. All in an effort to escape the pressure coming from the stiff competition behind him.

“My [crew] guys were telling me that we were getting away [from the field] and I kind of started riding,” Blair said. “But then I got to those lapped cars, and boy, I couldn’t get around a couple of them for a long time. I looked back up at my guys and they were telling me Lanigan was catching me, and I was getting nervous, let’s put it that way.”

The race’s only caution flag flew with 28 circuits remaining for David Scott, who blew a right-rear tire and came to a stop in turn one. This erased Blair’s comfortable lead in lapped traffic and restacked the field, placing the hard-charging Lanigan right on the #111’s rear bumper.

A great restart by Blair gave him the advantage he needed to keep the field at bay. But lapped traffic reared its challenging head again with just 12 laps left.

After running much of the race in the preferred low groove, Blair shot up high in his first attempt to get around the second wave of slower cars but was met with heavy resistance as Lanigan closed the gap. Less than a car length separated the two as they dove into turn one with 11 laps remaining.

“The lapped cars helped me get caught up there, but once Max cleared them, I knew he was going to be hard to pass,” Lanigan said.

Blair kept at it and was able to find his way around the slower cars in the next few laps, opening up a comfortable 1.7-second gap again by the completion of lap 50.

“With a couple [laps] to go, I looked back up at my dad and he told me I was okay,” Blair said. “I figured there must still have been a lapped car in between us, so I just put it in cruise control and got to the end.”

This was a special win for the Blair family. After so many years coming to the third-mile Western New York oval to watch his father, Robbie, race and eventually build his own library of experience, Max finally has a win against a national tour at Stateline. He’s also got a great appreciation for the track management, its staff and the fans that come to fill the place each weekend.

“I literally grew up here,” he said. “And that’s what this is all about. I’ve got tens of thousands more laps at this place than any of these guys do, and obviously that gives me a big advantage.”

“I love this place. They’re doing a heck of a job up here. For what this facility was five years ago to what the new owners have brought it to, it really is amazing,” Blair added.

Overall, a great showing by the Titusville, PA-native, not to forget the rest of the local crew as well. Hess and Chub Frank were the other two drivers in the top-five when the checkers fell, making it an even bigger win for the locals against a national tour.

“I think if you look at how things went all night long, the local cars were very good,” Blair said. “I think that shows two things. Number one, we’ve got really good local talent around here. Number two, this racetrack is a different animal, and the local cars know what they’re doing.”

“Stateline always seems to be a tricky place for people who don’t get a lot of seat time here,” he said. “It’s a different type of racetrack. We’re pretty happy with third place, and I’m sure Max loves getting the win. But any time you can beat the Outlaws, it’s fun.”

Hess ran a solid race through 50 laps, keeping his #44H on the podium for every lap except three in his battle for position with Lanigan and Shane Clanton. Preferring the high line for most of the night, Hess said it might have used his tires up by the end, but he was happy with his podium finish and to see Blair get the win.

“Lapped traffic slowed Max up and let us all catch up to where I thought we might have a shot,” Hess said. “But I was a little used-up at the end. I was able to hold everybody else off and hold onto that third, so it worked out well.”

Blair’s only previous World of Outlaws win came at the McKean County Raceway back on June 20, 2017, and he’ll savor win number two at Stateline for a lifetime.

Join us tomorrow night in Dundee, New York, as the Outlaws take on the Northeast locals once again at Outlaw Speedway in another 50-lap, $10,000-to-win showdown as part of the track’s 4th annual Fall Nationals event. Hot Laps kick off the racing action at 6 p.m. ET, live on DIRTVision!