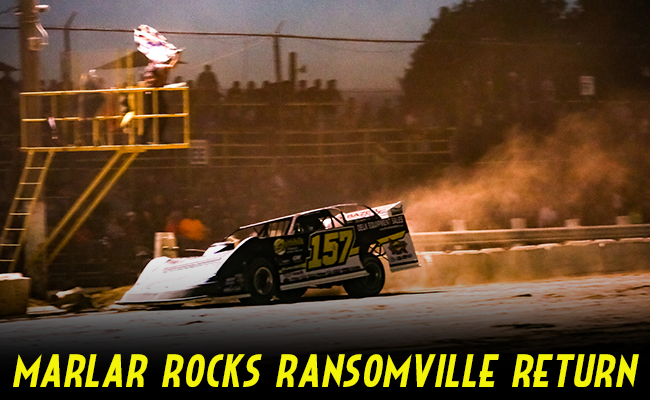 RANSOMVILLE, NY – June 15, 2018 – The World of Outlaws Craftsman® Late Model Series returned to Ransomville Speedway for the first time in 13 years on Friday evening and the Sears Craftsman Feature proved to be worth the wait.

The 50-lap event saw three different race leaders but it was Mike Marlar who claimed the victory and the $10,000 payday. The driver out of Winfield, TN commandeered the lead of the feature with only 10 laps remaining in the event bypassing Brandon Sheppard, Chase Junghans, Chris Madden and Chub Frank for the top spot.

“Honestly, it took me a while to figure out the race track,” said Marlar. “It kind of had some dirty spots and took me about 15-20 laps to figure out what I was doing wrong. Once I got that cleared up this thing came to life. Fun race and I’m glad I got by those guys.”

Wheelman of the Rocket1 Racing machine, Sheppard claimed the lead from pole sitter Tyler Erb on lap 11 and began to set a torrid pace ahead of the field. Unfortunately for Erb, who was having one of his best runs of his 2018 season, on lap 23 he suffered a flat right front putting him into the wall in turn one. Erb returned to the track only to retire from the race on lap 30.

Sheppard held more than a two second lead over several ongoing battles for second and third involving Madden, Marlar, Chub, and Junghans. In only two laps time, Marlar sliced Sheppard’s lead by more than half. Marlar made the move on the outside and passed Sheppard at the line on lap 40. By the time the checkers fell, Marlar had created a 2.115 second lead.

“I’ve got to say thanks to my crew Jerry [Sprouse] and Josh [Davis] and my wife [Stacey] as well as Brian Daugherty and Erik from Integra who are here this week helping us and everyone from Rocket,” said Marlar. “We had an up and down night. I had the radiator knocked out after the heat and this and that. I’d like to thank them guys. I get to stand up here and be the hero but those boys are always pulling it off.”

Before continuing his celebration in Victory Lane, Marlar took a moment to share a heartfelt condolence on behalf of the recent passing of long-time World of Outlaws scorer and girlfriend of Series’ Announcer Rick Eshelman, Sandy Holt.

“I’d like to give my [cardboard] check to Rick Eshelman tonight. I don’t know if anyone has ever done that but he just lost his long-time girlfriend and he has been a special guy in racing,” added Marlar. “When I heard the news [about Sandy] I wanted to do something nice for Rick, so here’s my chance. I appreciate you supporting us and doing everything you do. You’re a really awesome guy. He’s taking it pretty good for as tough of a hit it was. We are really lucky to have him and wouldn’t want to do it without him.”

Sheppard finished second in the World of Outlaws shootout at Ransomville Speedway.

“It was a pretty crazy race out there,” said Sheppard. “It got really dusty and if I got off the bottom I couldn’t really see where I was going…I think Mikey had a little better tires on than I did so hats off to him. He caught me sleeping down here on this end on the top. We had a really good piece and a really good weekend so far. We’ll take a second place… We have a pretty good run going here so hopefully we can keep it going the rest of the year.

Junghans rounded out the podium by tying his best World of Outlaws Craftsman Late Model Series finish of the 2018 season with a third.

“Hopefully we get [a win] pretty soon but I’ll take it after last night,” said Junghans on his 13th place finish at Stateline Speedway prior. “Hopefully we’re going in the right direction.”

The World of Outlaws will race Wayne County Speedway in Orrville, OH on Saturday, June 16 for the final night of its triple-header weekend.