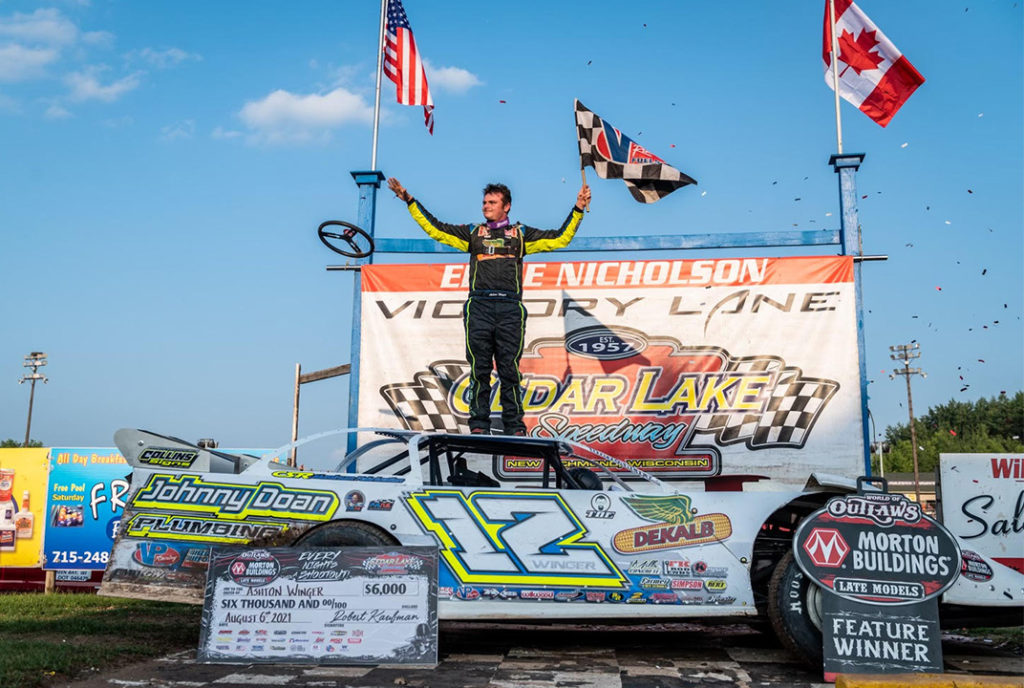 Ashton Winger beat Chase Junghans by 0.107 sec. to get his second career win at Cedar Lake Speedway during the USA Nationals

Ashton Winger and Chase Junghans suffered from the cruelty of misfortune in the early stage of the 2021 World of Outlaws Morton Buildings Late Model season, forcing both to scale back. Rebuild.

Friday afternoon at Cedar Lake Speedway for the USA Nationals, both had redemption within reach. Side by side, about an inch apart, equal at the nose with their family-owned cars, they could see the checkered flag waiting to be claimed. But worthy only to one.

With Junghans low and Winger high, the Georgian found an ounce more speed from the top line, beating Junghans at the finish line by 0.107 sec.

The victory is Winger’s second career World of Outlaws win – coming about 13 months after he claimed his first at the Wisconsin track last year.

“I don’t know what it is about this place, this place is awesome,” Winger said in Victory Lane. “It’s awesome to see all of these fans out here. Every time I roll in here it feels like home. It’ll definitely always be a special place to me since it is where I got my first Outlaw win.” With the sun still illuminating the 3/8-mile speedway, the green flag became vibrant when it hit the air, unleashing the Most Powerful Late Model on the Planet. Junghans started on the pole, alongside Boom Briggs. And while the Kansas driver pulled away in his blue #18, Briggs had a poor start and fell to fourth by the first corner. His error opened a lane for Winger to go from fourth to second on the first lap and plan his pursuit of Junghans.

Behind them, three-time and defending champion Brandon Sheppard crept into third, watching. Waiting.

Junghans trekked low, while Winger soared around the high side. Lap by lap Winger closed the gap, gaining ground every time he exited a corner. On Lap 7, his white #12 machine was even with Junghans by the middle of the first corner before he mashed the throttle and launched his chariot to the lead down the backstretch.

Winger kept his momentum steady after the pass, putting distance between him and Junghans, who now had to fend off attacks from Sheppard.

Seconds before Winger was about to hit slower traffic, the first caution of the race emerged on Lap 17 when smoke vomited out of Ryan Gustin’s car. When the race resumed, the caution was immediately called again for Bobby Pierce getting sideways on the front stretch with right rear damage.

The break of momentum didn’t hinder Winger’s spirits. This was a wiser, more seasoned Ashton Winger than a year prior. He spent the summer on the DIRTcar Summer Nationals tour, building his team and his confidence. He said the tour helped him learn to have fun racing again, and it’s shown with four wins this season. So, when the race restarted, there was no dull in his focus.

He ran away from the field with his hunger for the win growing every lap. Junghans was still preoccupied with fending off Sheppard and now Jimmy Owens, who emerged into fourth.

It wasn’t until lap traffic finally came into play that Junghans saw hope. He has two World of Outlaws victories, but his last came in 2019. Having spent several months away from the Series tour to prepare for the crown jewel events, he was just as eager as Winger to bath in confetti again.

With seven laps to go Winger jumped the cushion, killing his speed and momentum. Junghans was now within striking distance. With both navigating slower traffic Junghans had a better time of it and reeled Winger in lap by lap.

White flag. Winger led, but Junghans was on his bumper. Knowing his rival was close, Winger dove low into Turn 1 to stop a slide job attempt but Junghans went high to build momentum. It worked. He looked low on Winger down the backstretch and roughed his way underneath him going into Turn 3 with the two cars banging fenders.

At the exit of Turn 4, Junghans had the lead by a nose. It wasn’t enough, though. Winger used the high side momentum to his advanced and stole the win.

“I just needed to leave a little bit better off of (Turn) four,” Junghans said about what he needed to win. “I saw him take the bottom on that last lap and I was licking my chops. I was like, ‘I’m going to blast it off in there and cross him over.’ But, I mean, we did all we could. I ain’t going to wreck him for six grand or nothing. We’ll just build off of that and keep on trucking.”

Sheppard had to settle for third, but was still satisfied with the result, knowing he had a good car for the rest of the weekend. “We were definitely able to get some good notes for tomorrow and the rest of the night,” Sheppard said. “It’ll probably still be that slick. Definitely nice to get laps on a track that slick. I know they’re going to work on it and make it really good for us. Another good run for us. We had a really good car. We’ve been really close on the car the past couple of weeks here. So, really excited about that.”

Running the Summer Nationals tour for Winger was all about rebuilding his way back to being a full-time World of Outlaws again. He may now be there.

“Thank you to everybody that has helped me and turned a wrench on my race car. This is awesome,” Winger said. “I’m just a silly ol’ Georgia boy trying to make everyone proud and do it in front of all of these people. That was probably one of the best day races I was ever a part of.”

UP NEXT
The World of Outlaws Morton Buildings Late Model Series continues its action at Cedar Lake Speedway for the USA Nationals Friday night before the $50,000-to-win Feature on Saturday, Aug. 7.