Jim DenHamer Photo
Six-straight World of Outlaws wins at DIRTcar Nationals for the defending champ
By Jordan DeLucia February 13, 2020 at 5:43 am |

BARBERVILLE, FL — Just when it looked like Mark Whitener was going to win his first World of Outlaws Morton Buildings Late Model Series Feature on Wednesday night at Volusia Speedway Park, he and Brandon Overton started slamming into each other from Turn 2 to Turn 4, leaving a lane for Dennis Erb Jr. and Brandon Sheppard to claim the lead with eight laps to go.

Erb was glued to the bottom, Sheppard blasted the top side. Erb’s groove proved to be just enough to edge Sheppard at the line by the blink of an eye. But following the Victory Lane celebration, Erb did not bring his car to postrace inspection as required, forcing officials to penalize him to last place and award Sheppard the victory, his first of the season. It was Sheppard’s second victory during this week’s DIRTcar Nationals presented by Bozard Ford.

“The car was phenomenal again tonight,” Sheppard said. “We came from eighth and were able to get up through there and challenge Dennis. Unfortunately for him, things happen, and I sure hate to see that for him.” 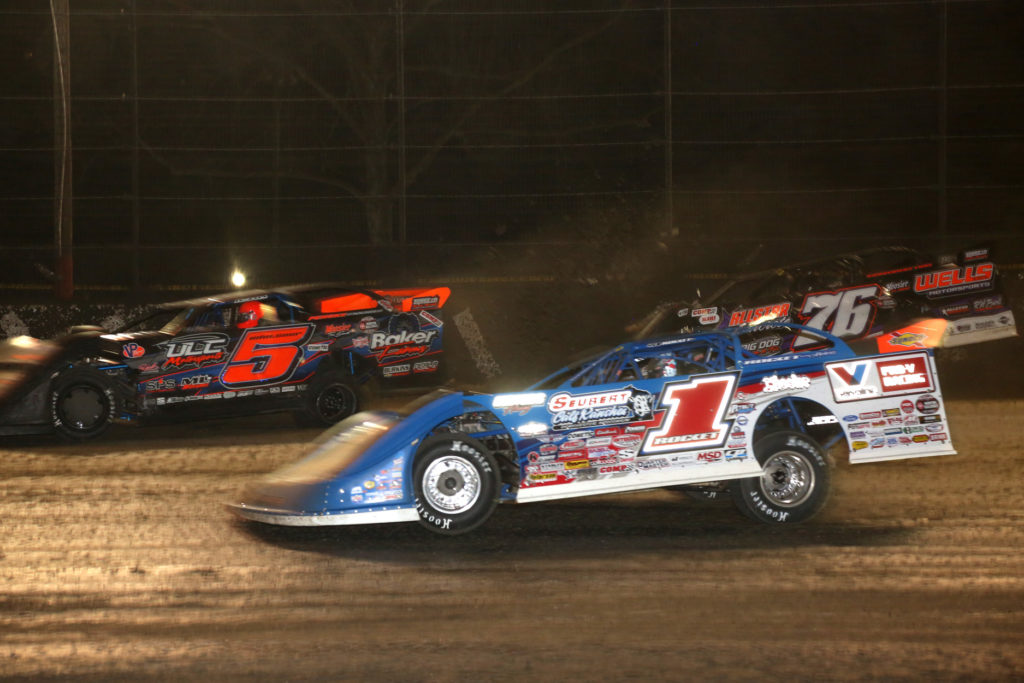 But before all of the postrace drama played out, original race leader Whitener and a hounding Overton reached their boiling points on lap 33, when the two made heavy contact in Turn 4 battling for the lead, leaving Overton in the outside clay-buildup and Whitener slowing at the top of Turns 1 and 2 – a flat left-rear tire on Whitener’s #5 and a crumpled nose on Overton’s #76. Overton pulled it into the pits and retired on the lap after the restart while Whitener changed his flat and finished the race in 25th.

More intense battling took place between the top three in the following laps until a caution flag waved on lap 26. Overton made a great move around the outside of Erb for second into Turn 1 on the restart to take second and made the pass for the lead on Whitener at the line as they came back around. Whitener took it back on the outside one lap later before another caution flew with just 10 laps remaining. 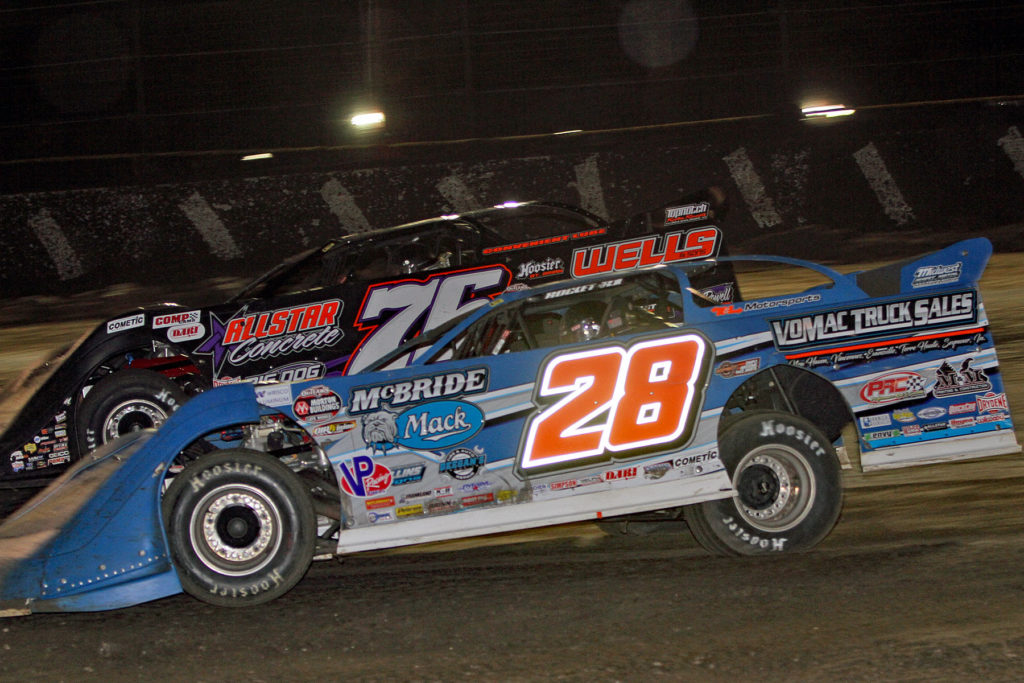 Whitener led the field back to the green and chose to slide up to the high line. Overton had the same idea as the two went into Turn 3 on the next lap and ran out of room on the top, forcing him to cross underneath. He slid up tight to Whitener as they passed by the flagstand and took the low line on Turn 1 entry, again drifting up the track in Turn 2.

Whitener had already committed to powering around the top in an attempt to beat Overton out of Turn 2, and the two made contact with each other and the outside wall at corner exit. Overton shot to the lead into Turn 3 and again drifted to the top as Whitener did the same, and the two collided off of Turn 4, sending Overton way up over the heavy cushion, damaging the nose on the Wells Motorsports #76.

The caution flag waived, and the two putted around the track as the field collected. Overton went right to the rear while Whitener went to the pits to change a flat tire. From his perspective, Overton said he initially left some room on the top side in Turn 2.

“He ran me up the track two or three times, run me up into the fence, pretty much, in Turn 3. I kinda just got tired of messing with him. I slid him, and I left him a lane, I left him some room to get by. I just made it tight for him because I was trying to show him like ‘quit doing that.’ I guess he felt like I flattened his tire, I didn’t run in there and flatten his tire,” Overton said.

However, Whitener said he saw the incident in Turn 2 differently.

“He just wrecked me. He slid all the way into me, put me in the fence and flattened my left-rear tire. He just completely fenced me. I just got wrecked,” Whitener said. 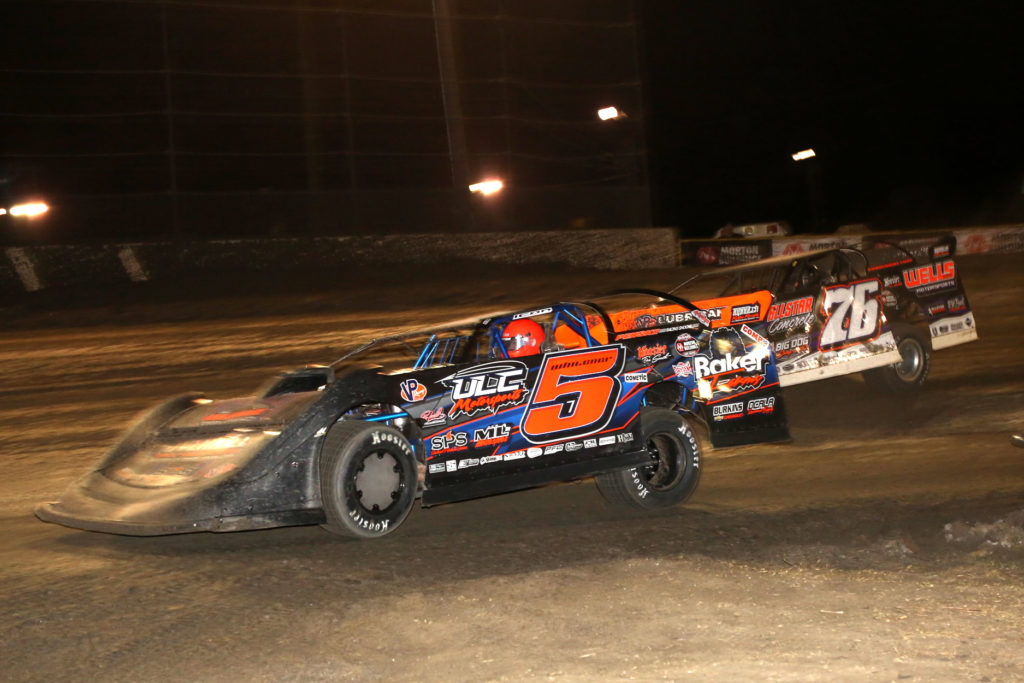 When asked about the contact in Turn 4 being retaliatory, Whitener said, “100 percent. And the bad part about it is, me and Brandon have raced Crates, we’ve raced spec for $3,000, $5,000, $10,000, whatever the case is. But this is a World of Outlaws $10,000-to-win race. You don’t wreck somebody leading the race. A Crate race, a local race, whatever. However he wants to race is good with me, I’ll rub doors all day long. But you don’t take someone’s first World of Outlaws win away from them by putting them in the fence. You don’t do that.”

Overton was scored with a 27th-place finish and had this to say about the contact in Turn 4:

“We got together, and I guess he felt like I ran him over, so he came back and ran me over. It is what it is, I just hate it for all these guys that work on this thing, but we’ll get it fixed up and go again,” Overton said.

With the two leaders now at the tail of the field, Erb inherited the lead and brought the field back around to the checkers, just .097 seconds ahead of Sheppard. But in the end, Erb was informed of his penalty and Sheppard was declared the winner.

“Not the way we wanted to win it, Dennis did a really good job there,” Sheppard said. “He kept it out in front of us that whole race. We were right there, definitely slicing-and-dicing there and had a really good race.”

With this victory, Sheppard earns his first Series win of 2020 and sixth consecutive World of Outlaws Feature at the DIRTcar Nationals. Coming from eighth, he stayed up front all race and will continue to be a favorite to repeat as Big Gator champion later this week.

“My guys have been doing a really good job, our car’s been really good night-in and night-out, so hopefully we can just keep the good runs coming,” Sheppard said.

The World of Outlaws Morton Buildings Late Model Series action continues from the DIRTcar Nationals at Volusia Speedway Park on Thursday night, where the field takes on another 40-lap, $10,000-to-win Feature.

Catch all the action live on DIRTVision!