BANDIT BEGINS: Lanigan Gets First Tour Win in Over 4 Years at Selinsgrove 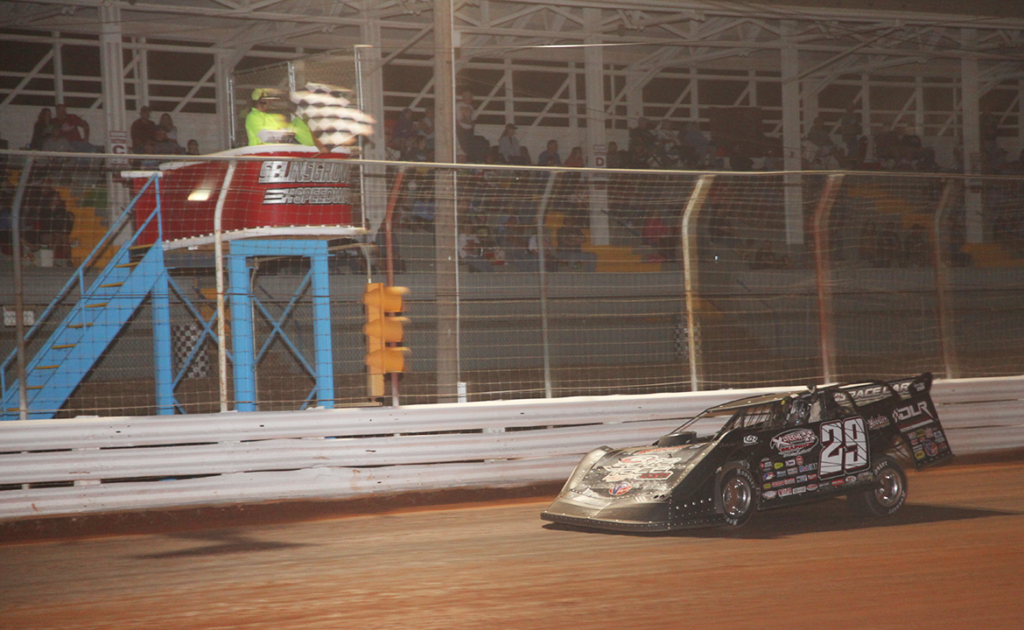 SELINSGROVE, PA – When “The Bluegrass Bandit” Darrell Lanigan set out on the road back in February for a return to the World of Outlaws Morton Buildings Late Model Series tour this year, he and his crew had one goal set higher than any other – win as many races as possible.

Now, after 36 Series starts this season, they’ve finally found the way to Victory Lane. The work that Lanigan and the team have put in over the previous seven months has finally paid off. Fittingly, Lanigan picked up his 73rd career Morton Buildings Feature win on Saturday night at the very same track he won his 72nd Feature at – Selinsgrove Speedway, back on Sept. 6, 2015.

Leading all 40 laps, the Union, KY-native fended off the stiff competition of Ricky Weiss and Brandon Sheppard for the win.

“It feels awesome. Our car’s been awesome this weekend. We’ve been working hard in the shop and found some stuff on the car we needed to fix, and we’re definitely going in the right direction now,” a smiling Lanigan said after the race.

After a string of third-row results in the redraw on the previous two nights, Lanigan’s luck turned around a bit on Saturday night. He pulled the pole position after winning his Drydene Heat Race and made the most of it at the drop of the green.

“Anytime you can start on the pole, you don’t have to deal with the other cars,” Lanigan said. “Get out to the lead in clean air, it really helps a bunch.”

Wasting no time out of turn four, Lanigan grabbed the lead and took command of the field early on lap one. An expertly prepared track surface made for several lane choice options, but Lanigan stuck with the preferred lane around the inside guardrail. That was, until a win record-hungry Sheppard offered up Lanigan’s biggest challenge for the lead all night on the high side.

Gaining the momentum up top, Sheppard got a run on Lanigan and took a look to the outside as they crossed the stripe to complete lap two. But Lanigan knew better than to let the 18-time winner slip by on the outside, and quickly moved up to block Sheppard’s pass attempt.

This took the air off the Rocket1 Racing ride’s nose and sent him way up into the cushion, resulting in several car lengths lost, as well as the second position to Weiss, who was right on Sheppard’s tail when Lanigan shut the door.

Weiss took the spot and carried it into lapped traffic, where he almost gave it back on lap 29 in a holdup with some slower traffic. Weiss soon escaped the pickle and continued on with Sheppard still giving chase close behind.

Weiss made a few passes in traffic on the high side when he had to, but preferred to stick to the cleaned-off bottom lane in order to save tires.

“I didn’t want to go up there any more than I had to and wear out the tire,” Weiss said. “I knew it wasn’t the best way to go when I drove in beside a lapped car and then leave beside them, so I just tried to make most of my passes in turns one and two to keep the tires under us.”

A caution flag with seven laps left restacked the field and gave everyone behind a shot at the leader. But Lanigan was too good on the bottom. He drove away once again after another yellow with three laps remaining to claim his first World of Outlaws win of the year, and made up some more points in the overall standings.

Lanigan is now a four-time Late Model National Open winner at “The Super Speedway of Dirt Track Racing.” Performance in clean air is crucial on these big half-mile tracks, and he certainly had plenty of that on Saturday night. The two restarts near the end gave those behind him another chance to get a run going, but they weren’t in clean air like he was.

“You never want to see a restart that late in the race. But anytime you can get on this big track and get in clean air, it makes a whole lot of difference,” Lanigan said.

For some perspective on how big the turnaround has been for the Club29 Chassis builder – Lanigan went on a stretch of nine World of Outlaws starts without a top-five finish (Red Cedar Speedway on July 14 to Port Royal Speedway on August 17). Since Port Royal, he’s finished no worse than sixth, with a runner-up at Stateline. The DLR crew has been hard at work on their hot rod over the past several weeks, swapping out old chassis parts and correcting other various underbody issues, and the effort has all come to the forefront late in the season.

“Everybody puts in 100 percent,” Lanigan said. “You work day-in and day-out, like all the top teams do. You’ve just got to have a good, dedicated crew that wants to win.”

As for Sheppard and the next installment of Rocket1’s chase for win #19 on the year, the team will have to try again in less than two weeks when the Series heads to the Southeast for three more races. Sheppard said he had a good car all throughout the Feature, but should have made the move for the lead even earlier than he tried to.

“We had a really good car. I just needed to make that pass for the lead on the first lap,” Sheppard said. “Darrell was able to slip up in front of me and get in the right line, and then it was over after that.”

The Outlaws will get 10 days off from Series competition to prepare for a weekend back down South, starting with a visit to Lavonia Speedway on Thursday, Oct. 3, Cherokee Speedway for the inaugural Mike Duvall Memorial on Oct. 4 and finishing at the 411 Motor Speedway on Oct. 5. Catch all the action live on DIRTVision with your Late Model Fast Pass subscription!