THE KNOW HOW: Kasey Kahne Racing Pulls Through Adversity To Claim Third Championship 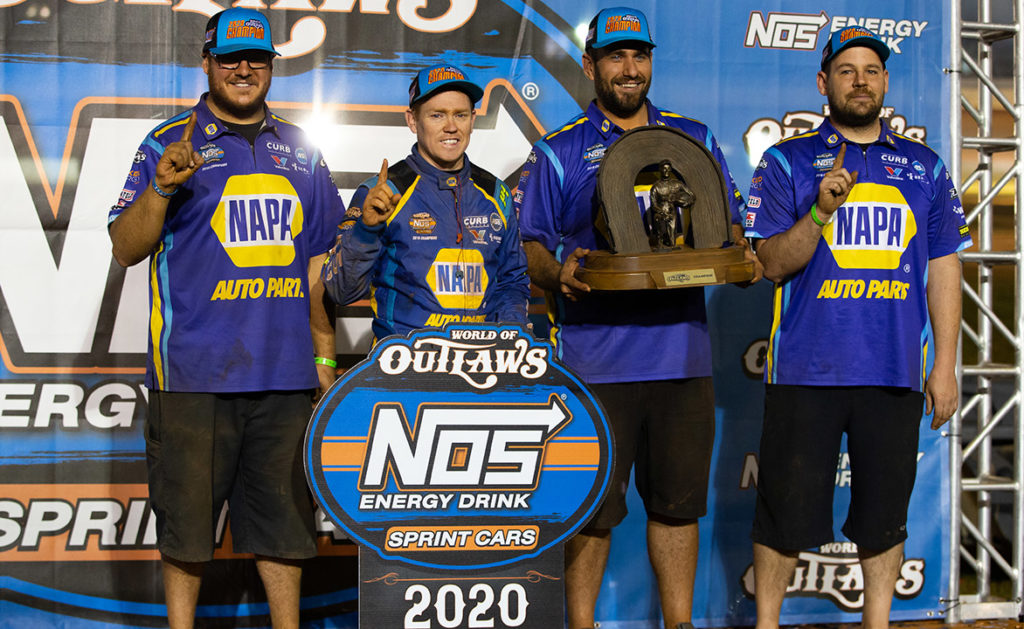 Mainly, it tested how they push through it all.

Brad Sweet’s Kasey Kahne Racing team – consisting of Crew Chief Eric Prutzman and crew members Joe Mooney and Andrew Bowman – exemplified the never give up attitude in 2020. At times they faced Hell, yet still walked through the fire ready for another round. That drive and determination led Sweet to his second consecutive World of Outlaws NOS Energy Drink Sprint Car Series champion and gave Kasey Kahne Racing its third team championship.

“It feels great to get number three,” said KKR owner Kasey Kahne. “And two-straight for Brad Sweet. The guys have done a really good job. A really good job in an interesting year. But overall, they stayed after it and did all they need to do to win.

“They just never slowed up. They never gave up. Brad is as focused and precise out here as ever. It is just fun to watch him. You just know he is always going to be there. He just takes care of everything all of the time. He’s got a really good team behind him and it is fun to watch.”

For the first time since 2013, Sweet and the team suffered four DNF finishes this year. Three of them came consecutively. Logan Schuchart, who finished second in points had one DNF and Donny Schatz, who finished third had two.

While it may have beaten their spirits at the end of the night, it didn’t kill their drive. In the 16-race span where Sweet suffered the four bad finishes, he still managed to earn seven top-10s – three of them runner up finishes. Then, he and the team returned to Victory Lane at I-80 Speedway for their eighth win of the season.

After that win, Sweet reclaimed the points the next weekend from Schuchart, racked off eight top-five finishes in a row and earned five runner-up finishes in the final 15 events. That performance helped him hold of Schuchart by 46 points at the end of the season to get his second title.

“It was a tough year,” Sweet said. “NAPA Auto Parts guys, we overcame a lot of adversity, to have four DNFs and still lead the points. We showed our resilience. We came in here (in the season finale weekend), and I thought, executed perfectly. We did everything we needed to do to win the points and get Kasey Kahne Racing the team championship.”

This year was Sweet’s third season with Prutzman as his crew chief. In their time together they’ve won the 2018 Knoxville Nationals, 2019 Jackson Nationals, 2019 Kings Royal, 33 World of Outlaws events and now two championships.
Prutzman, the 2019 Crew Chief of the Year, was handpicked by Sweet to be his crew chief. However, Sweet had admitted they’re kind of opposites. He likes to talk and figure things out, while Prutzman is a quiet thinker, he said. The key to their relationship is Sweet trusts him and Prutzman trusts Sweet. And the same goes for Mooney and Bowman.

“Me and Eric, Joe and Andrew, we’re all meshing,” Sweet said. “Obviously, to overcome some of the stuff we had to overcome this year I feel like it made us stronger. To win, it makes us desire to win next year even more.”

Prutzman, who had previously spent seven years with Tony Stewart/Curb-Agajanian Racing as a mechanic and was a part of four championship wins with Donny Schatz, said he sees the continued growth of the team and their strength as championship contenders, no matter the circumstances.

“It’s amazing,” Prutzman said about what the KKR team accomplished this year. “It just shows that our team is really strong and that we keep digging and just keep trying to win races and do our best. Obviously, we had really unfortunate races. It’s just really great.”

Sweet locked up the driver championship during the penultimate race of the year, but the team championship came down to the final lap of the final race with David Gravel trying to win it for Jason Johnson Racing. And Sweet was just as focused as bringing home another title for KKR as he was for himself. After securing his second championship, he said he felt like his work was half done.

“That means a lot,” Kahne said about getting his third championship as a team owner. “That’s kind of a split feeling if you don’t win them both. So, to win them both it feels like you were the best car, the best driver, the best team all season long in the toughest Series that there is in dirt racing.”

It means just as much to the entire KKR team, as well.

“Obviously, the driver [championship] is really important, but the team is all of us and Kasey,” Prutzman said. “Everybody at KKR, so it is a really big deal.”

By claiming a third championship, KKR became the fourth team in the history of the World of Outlaws to have three or more championships. The other three on that elite list our Karl Kinser’s team with 16 championships, TSR with nine championships and Steve Kinser Racing with six championships.

KKR is also only 15 wins away from 200 career World of Outlaws wins now.

They know their title run next year won’t be easy with the rising level of competition, but that’s still not deterring their drive and determination to go after it.

Their 2021 season will kick off Feb. 5-7 at the DIRTcar Nationals at Volusia Speedway Park. Click here for tickets.

Words cant describe how awesome this moment is. How much i love this team. I can’t believe we did it. I’m glad we get to race every single night with Donny and TSR But i can’t thank everyone at KKR for everything and able to live this life! Going to celebrate this one!#2019Champs pic.twitter.com/ycGsVGh8af

2020 packed some punches but we didn't back down! @BradSweet49 drove this @NAPARacing @KKRdirt team to another @WorldofOutlaws championship! Proud to be part of the 49 team! #Back2Back pic.twitter.com/TcHrlQL24E