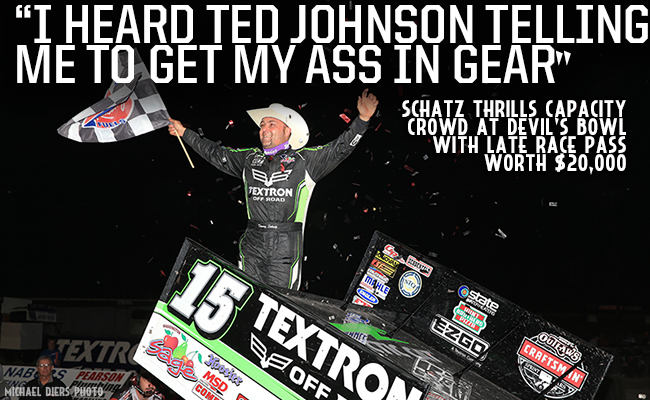 MESQUITE, TX – April 28, 2018 – “I heard Ted Johnson telling me to get my ass in gear,” an elated Donny Schatz said after making a late race pass on Brad Sweet to capture the finale of the Texas Outlaw Nationals at Devil’s Bowl Speedway. Sweet led the first 25 laps, but settled for second with Shane Stewart completing the podium.

For the second night in a row, Jason Johnson paced the field in Qualifying and won his heat race. Brad Sweet edged his boss Kasey Kahne to take the Craftsman Club Dash, earning the pole for the 30-lap Feature. Sweet set a torrid pace as Schatz and Stewart waged war for the runner-up position.

Schatz wrestled the runner-up position away from Stewart on the eighth circuit and set his eyes on the leader. The lone caution during the race flew on Lap 11 as Tucker Klaasmeyer lost the handle on his Keith Kunz No.67K.

Stewart edged in front of Schatz on the double-file restart, but Schatz re-gained control of second down the backstretch. Sweet continued to lead and navigated traffic at a quick pace, but Schatz stayed with the Grass Valley, CA native through traffic and began to close on the bottom side of the speedway.

Sweet, who won the Texas Outlaw Nationals last year, continued to pound the cushion as Schatz showed his nose underneath him. With anticipation building amongst the crowd, Schatz powered off of the bottom of turn four to take command of the top spot and never look back.

“What an awesome race track. They gave us a top and bottom, the bottom was tricky, but if it was easy, everyone would be doing it,” Schatz said. The win for Schatz was his fifth of the 2018 season and was worth $20,000 and the Ted Johnson Memorial trophy.

“Ted looked after his people, he had great relationships with his guys. He had a serious passion, not only for his guys, but for putting on a great race. I remember watching him bounce up and down because Steve [Kinser] and Sammy [Swindell] were putting on a show,” Schatz reminisced about the late great Johnson. “He was a race fan.”

Sweet settled for second and was in good spirits, but understandably disappointed as he was searching for the first win of the season. “That’s the difference between winning and losing and Donny’s the best at it. The race track was great, it slicked off with multiple grooves,” Sweet said.

Shane Stewart was pleased with his podium finish, “This is a special place for me. I have a lot of friends and family out here, so to finish on the podium is special. I wish we could have been fighting for the lead up there, it was a great race, I watched it.”

Logan Schuchart charged from 12th to finish fourth for his second consecutive top-five finish with crowd favorite Jason Johnson completing the top five. After changing motors after his Heat, David Gravel bounced back with the KSE Hard Charger award coming from 19th to complete the top ten.

The World of Outlaws Craftsman Sprint Car Series continues its 40th Anniversary Season with a trip back to the Midwest. The Series heads to Missouri next for a date at Lake Ozark Speedway on Friday, May 4 before making its annual trip to the Salina Highbanks Saturday, May 5. If you can’t make it to the track, be sure to watch all the action LIVE on DIRTVision.com!