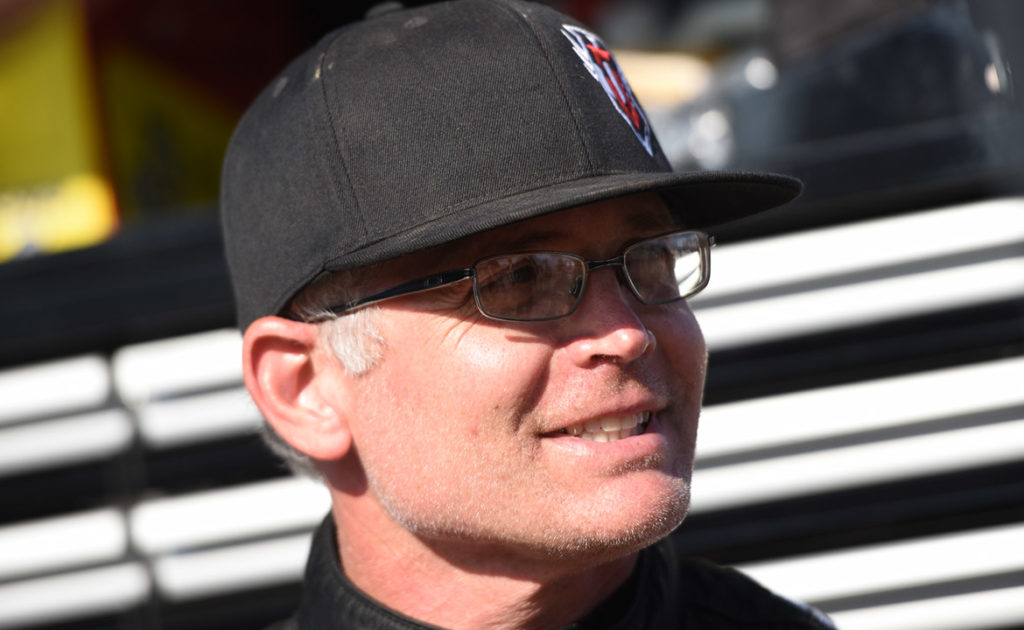 To him, it’s a respectable career and said he’s happy with it. However, there’s reluctance in his voice when saying “happy.”

At 48-years-old, he won’t say he’s retired from full-time World of Outlaws racing but knows it’s not for him right now. That doesn’t stop him from thinking about what could still be and what could have been.

“All I know is I gave my best and it’s just…,” he said before pausing and asserting his thoughts. “It sucks. Sometimes it sucks when you look back and… you know, I saw someone tweeted about the 2008 Kings Royal. That got me thinking about the 2008 World of Outlaws season. We had a great car all year but blew like 11, 12, 13 tires and every time we blew a tire we were leading. And that Kings Royal we were leading and blew a tire with like 10 to go. So, you know, you look back on years like that and go, ‘Man, what our year could have been or should have been.’ It can beat you up. Or tear you up to where you just don’t want to do this anymore. It is what it is.

“I had a great 18 years with the World of Outlaws. A lot of guys only get one or two. It’s been good to me. It’s been great. And you never know. I’m only 48. I might change my mind. I just don’t have the drive right now to do what I need to do to feel like I can race with (Donny) Schatz and (Brad) Sweet week in and week out. You can’t just hop in these cars every now and then and think you’re going to beat these guys. You have to commit to be successful.”

(RELATED: Hear from Saldana when he’s paired with broadcaster Bobby Gerould and host Dillon Welch to relive his incredible 2007 race at Federated Auto Parts Raceway at I-55 during Saturday night’s #DVWatchParty presented by NOS Energy Drink at 7 p.m. on DIRTVision presented by Drydene.)

The four races he ran with the World of Outlaws in 2019 further highlighted that for him. Although, he was far from off the pace.

Saldana teamed with Ed Neumeister Racing in the #12N to run the week of races at Eldora Speedway leading up to the Kings Royal. It was meant to be more of a “dyno-test” for the team’s Fisher Racing Engines than a competitive attempt. Aside from some motor issues, he ran competitive each night and finished 11th in the Kings Royal.

Their performance encouraged them to try their luck at the 360 and 410 NOS Energy Drink Knoxville Nationals. He set Quick Time for the 360 Nationals and finished fifth in the Feature. He then started third in the 410 Nationals, led laps early and eventually ended the night 14th.

“I need to race more to be an Outlaw winning driver right now, and I realize that,” Saldana said. “It was also cool to not race all year and then go, to me, the three biggest races of the year, the Kings Royal, 360 and 410 Nationals, put it in the show for all three of them and run respectable. It definitely made me feel good.”

Racing in the Knoxville Nationals – finishing second three times – and winning races like the Gold Cup at Silver Dollar Speedway, the Kings Royal – twice (2002 and 2006) and the Ironman 55 at Federated Auto Parts Raceway at I-55 are some of the memories he cherishes the most of his career.

The quarter-mile Federated Auto Parts Raceway in Pevely, MO was one of his favorite tracks to go. It showed, winning there three times. He recounts winning his last race at the track in 2010 with a broken hand.

“I had a metal plate and 10 screws,” he said. “I crashed on a Saturday. They did the operation on a Monday and I raced that Friday. I finished second that night and then Pevely the next night, we won that. I remember that night in Victory Lane crying like a baby [my hand] hurt so bad. But you don’t even think about it. You just got out and you do it. Pevely has definitely been good to me.”

He also remembers having one of the best cars of his career at the track in 2007 while driving the #9 car for Kasey Kahne Racing (which you’ll see Saturday night at 7 p.m. on DIRTVision during the #DVWatchParty). He set Quick Time and powered his way around traffic for 40 laps to win the race.

Saldana admits he’d love to be full-time with the World of Outlaws, again. However, if a team were to offer him that opportunity right now, he said he’d probably turn it down. He doesn’t feel he could make the sacrifices needed to do so and put his focus 100 percent into it at the moment. For now, he’s enjoying spending time with his family, racing Micro Sprints with his oldest son and building oil tanks for Sprint Car teams.

At the beginning of the year Saldana acquired Godfrey Autosport’s Spike Oil Tank division – now branded under Saldana Racing. It’s a small business he runs himself that keeps him busy and keeps him firmly in the racing world – building oil tanks for teams like KKR and Tony Stewart/Curb-Agajanian Racing.

“I love it,” Saldana said. “It’s just me and a welder and that’s it. I don’t want to get to a point where I need to hire anybody. I like to be hands-on and doing it myself. I enjoy fabricating. I’ve always done that with my own cars.

“You’re not going to make a million dollars at it. At least you can make enough money that makes its own way, put a nice product out there. And teams like Ford and Andy Durham (owner of Durham Racing Engines) are putting them on Donny Schatz’s car and Tony Stewart’s car, so, I mean, to me, it just made sense. It was the right thing at the right time.”

While the passion and urge to get back behind the wheel of a Sprint Car still brews inside Saldana, he models the reverence of his career after how his father, Joe Saldana, looks at his own racing career.

“He won the Knoxville Nationals (in 1970). He goes and runs USAC full-time. He goes and runs the Indy 500. He ran CART for a season. He made it to the echelon,” Saldana said. “He made it to the highest of the high and it got to the point where, OK, Roger Penske and all of these guys are coming in and it’s a money thing and the low buck teams are getting pushed to the side. He felt like, ‘I made it to the top and I don’t want to go back. I don’t want to do it anymore if I can’t race at this level.’ I think that’s the same for me.

To Saldana, a driver is only as good as their last race. Judging by his last race, his racing days may not be completely over, yet.

Then on Saturday, April 4 at 7:00 p.m. (ET) is the Sprint Car Summer of Money #DVWatchParty presented NOS Energy Drink, featuring Joey Saldana and Bobby Gerould remembering Saldana’s 2007 thrilling race around Federated Auto Parts Raceway at I-55, followed by Terry McCarl and Donny Schatz talking about “The Wave” during the 2007 race at K-C Raceway (now Atomic Speedway).

The DIRTVision FAST PASS is available for $39/month and features the World of Outlaws Sprint Car and Late Model Series, the iRacing Invitationals, weekly racing from Knoxville Raceway, Williams Grove Speedway, and Attica Raceway Park, the DIRTcar Summer Nationals, the biggest Sprint Car events in Australia and much more.