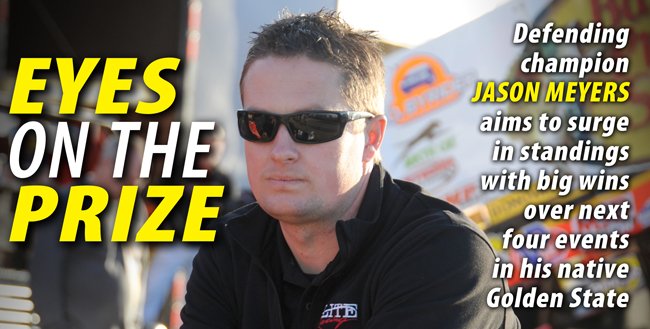 Golden State native not satisfied with only one series title, seeks major event victories in 2011

FRESNO, Calif. – March 17, 2011 – For many drivers on the World of Outlaws circuit, the month-long tour through California presents an opportunity to enjoy the sights and sounds of the West Coast. For 2010 series champion Jason Meyers , it’s an opportunity to sleep in his own bed.

“We spend a lot of time on the road obviously,” said a relaxed Meyers, at his team’s second shop just outside of Fresno, Calif. “It’s really nice to get that time in at home and it does make quite a bit of difference when you end up spending great periods of time away as the season progresses.”

Meyers and his team know all too well the rigors and hardships of the World of Outlaws schedule and competition. A married father of two little girls, Meyers narrowly missed a series championship three times before he and his Elite Racing Team finally put together all the pieces in 2010 and won their first World of Outlaws crown. Many would consider 12 victories, 36 Top 5 finishes and 56 Top 10’s a phenomenal season, but the driver of the #14 DDNI/GLR Investments/Allstar Performance/Elite Landscaping KPC actually thinks his team didn’t have its best season ever.

“Statistically speaking, it wasn’t our best year, but I felt like we were way more consistent and that’s what it takes to win championships,” Meyers said.

During the off-season, Meyers and his team focused on making little tweaks to the championship caliber team rather than big changes. One of the adjustments was team chemistry. Crewman Shane Bowers came over to Elite Racing after several seasons with four-time champion Donny Schatz and Tony Stewart Racing. Meyers and his team have also experimented early this season with new ideas on setups, looking for an edge that will help them in their title pursuit.

“I’m not against trying new things at the beginning of the season,” said Meyers, who has amassed 47 career wins. “I just want to make sure that we get things figured out by the time we are back here.”

Meyers was referring to the second World of Outlaws West Coast swing in August and September following the 51st Goodyear Knoxville Nationals.  It’s a strong portion of the schedule for his team and, in the past, Meyers has been able to gain as many as 100 points in the championship title chase in that span. While points are bearing on his mind, the native of Clovis, Calif., has other goals for this season.

“We want to win more of the big races,” he said. “We want to win the Knoxville Nationals, the Kings Royal (at Eldora Speedway) and the National Open (Williams Grove Speedway.) We’ve been close in the past. We’ve run second and third in a number of them so we know we’re almost there.”

Big wins aside, the overall goal for everyone associated with Elite Racing is to be back on the stage at the World Finals in November accepting another championship trophy.

“We really feel like we are just as strong, if not stronger, than we were last year,” Meyers said. “Good teams win one championship. Great teams win multiple championships. We want to be a great team and we fully believe we can achieve that.”