MAKIN’ A SPLASH: Logan Schuchart off to career best start 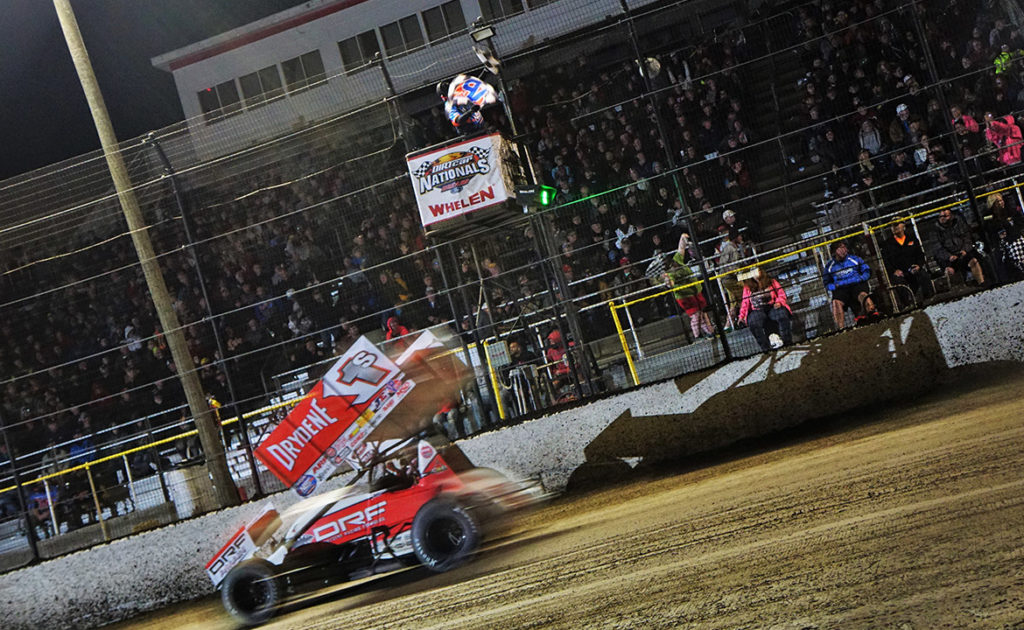 Share on facebook
Share on twitter
Share on linkedin
Share on reddit
Share on whatsapp
Share on email
Share on print
Schuchart heads into Texas doubleheader with a win already under his belt
Logan Schuchart had never won at Volusia Speedway Park coming into the 2020 DIRTcar Nationals. Never led a lap. Never even finished inside the top-five. That’s changed.
In the three World of Outlaws NOS Energy Drink Sprint Car Series season opening races at the half-mile Florida track, Schuchart amassed 50 laps led and three top-five finishes, including two podiums and a win.

“Getting a win before we leave Florida is awesome,” said Schuchart, of Hanover, PA. “I’m really excited about that.”

Schuchart is now second in the standings, two-points behind reigning champion Brad Sweet. It’s the best position he’s been in to start a season with the Texas doubleheader at Cotton Bowl Speedway on March 13 and LoneStar Speedway on March 14 the next stop on the tour.

His performance is a testament to the continued growth of his talent and Shark Racing’s capabilities since joining the World of Outlaws tour full-time in 2014.

The team’s first few years were about surviving and making it to November, Schuchart has said. In his rookie campaign he earned five top-five finishes and 15 top-10s. It wasn’t until 2016 that he earned his first career victory.

Last year, in a breakout year for the 27-year-old, Schuchart earned a career high eight wins – doubling his number of total career wins – 32 top-five finishes, 53 top-10s and led 243 laps. He also finished a career best fifth in the Series standings. And while that success has helped propel him to a strong start this year, Schuchart cites he and the team’s progressive growth began long before 2019.

“Not just 2019, but all of the years in general, the experience over the years, taking notes, getting better and just getting smarter about everything,” Schuchart said. “I just feel like the more experience we get the smarter we get about certain things.

Schuchart’s five days in Florida showed how quickly he and his Shark Racing team can learn and adapt. The two opening Sprint Week races during the DIRTcar Nationals with the All Star Circuit of Champions saw Schuchart finish 11th and 17th, respectively.

Then he nearly won the season opening race for the World of Outlaws. Schuchart led 21 laps and lost the lead to 10-time Series champion Donny Schatz with three laps to go, settling for a runner-up finish. The next night he failed to qualify for the Feature and had to use a provisional to start. However, he was able to charge his way from 25th to fifth – earning the Hard Charger award for the night.

On the final night of racing in Florida, Schuchart led 29 of 30 laps, and held off attacks from Cory Eliason and Daryn Pittman to pick up his first Volusia Speedway Park win. His Shark Racing teammate Jacob Allen also got a career best finish of 12th at the speedway on the final night.

“Definitely a weight off your shoulders knowing you got one,” Schuchart said. “They’re so tough to come by. To get one off your back and being able to just go out there and race and build off of what you already have is definitely a relief.”

While Schuchart is on track for another possible career year, with more than 80 races to go this year, contending for the championship is far out of his mind.

If you can’t make it to the events, you can watch all of the action LIVE on DIRTVision.com.