Checkered Past: Reindeer on Rails 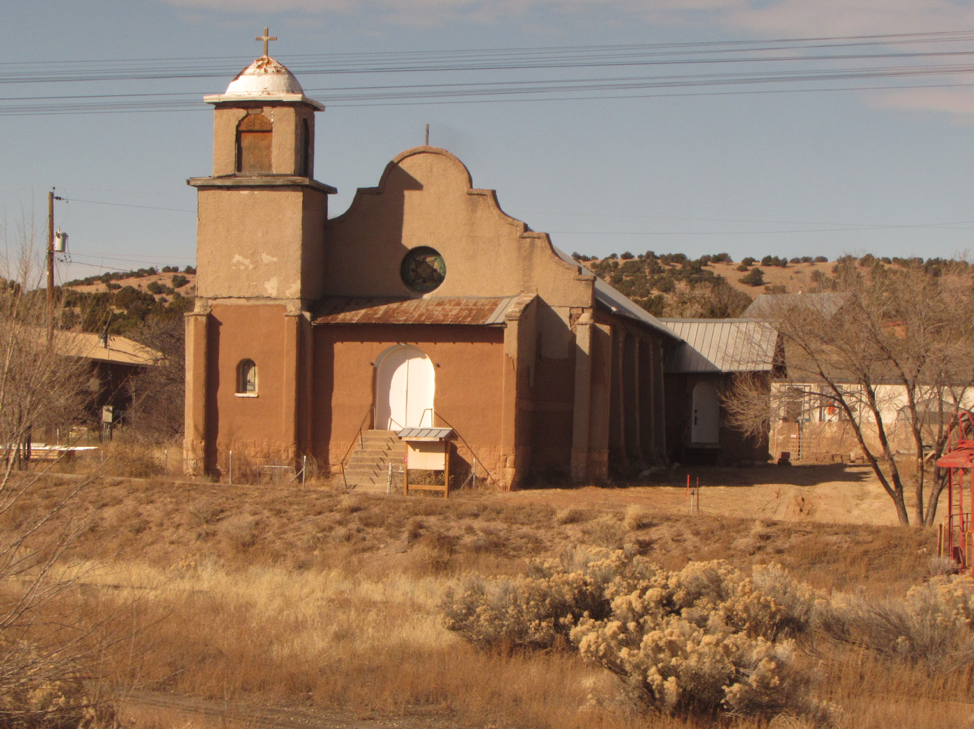 Christmas is a time for family. Religious affiliation does not matter nearly as much as hugging mothers and fathers, laughing with brothers and sisters, and seeing pure joy on the faces of their children.

Dad did not seem especially fond of Christmas (bills), but mom sure is. Perhaps it was her German childhood or the American divorce that brought her sons together only at Christmas that made this holiday extra special. After her first son went rogue, I moved heaven and earth. Most of those years, I was thousands of miles warm and west of Allentown, PA. And yet I never once entertained the option of skipping the celebration without her blessing, which was extended about six winters ago. Such separation was not too painful until that same gypsy got locked up. Christmas Eve 2016 was when the family passed the phone around the living room to cheer up the convict. It failed.

Christmas 2019 would be different despite the fact that I no longer drive or frequent airports and hate buses. I do enjoy train travel. Amtrak runs regularly from Los Angeles to Chicago for less than $300, so the Southwest Chief became my Christmas sleigh. After a year and a quarter in SoCal, I left San Marcos with Las Vegas-bound Darren Slater to “the edge of Barstow” to keep him free of L.A gridlock and save me fifty bucks.

Slater hauled his scissor lift past the I-215 exit to Perris Auto Speedway, where the World of Outlaws have performed 17 times (Mark Kinser captured the first seven) since “The PAS” opened in 1996 and will return on Saturday, March 28.

Barstow’s depot is one of the historic Harvey Houses that provided elegant dining to train travelers since 1911. It is now an empty museum. On my limited rails, I have learned that few stations are actually open to sell tickets. Barstow was no different. I printed one in advance then waited through Thursday Night Football from Hooz On First tavern across tracks.

I had never spent forty hours on a train. I would not advise such without splurging on sleeping berth for three times the price. Some folks can sleep in a sitting position. I cannot. No wifi was annoying, but Amtrak’s current CEO is an ex-airline executive bent on eliminating cross-country rail while the world embraces it. If you desire such a unique travel experience, do not hesitate. Best economic scenario would exit the train after dark (no more scenery) in any town within luggage-dragging distance of motel, bar and grill then reboard in the morning.

Southwest Chief averages 55 MPH but often reaches 90 during its 2265-mile run. It is a smooth ride for the most part unless restroom marksmanship is a man’s goal. Please wipe. Amtrak rails basically trace I-40 to Needles, Kingman, Flagstaff, Gallup, Grants and Albuquerque then bends north.

No family placed Albuquerque on the auto racing map like “The Unbelievable Unsers” that titled Joe Scalzo’s 1971 book. Bobby, Al and Al Unser Jr. combined for NINE Indianapolis 500 victories. Bobby Jr. and Al Jr. raced with the World of Outlaws until 1981. During its inaugural season, Bob II tried the 1978 Knoxville Nationals. He and Al II crossed sixth and seventh at Denver 1979. Little Al achieved third at Manzanita (his series best), eighth in the Devil’s Bowl, and final grid of 1980 Knoxville Nationals after winning without sanction at Oskaloosa. Gary Stanton brought the kid to fifth at Tulsa Fairground (with wings) before Unser followed the family to The Brickyard.

New Mexico’s lieutenant governor Casey Luna brought The Outlaws between the big concrete pipes of Albuquerque’s Duke City Speedway each autumn in 1987-90. Steve Kinser won twice and Luna’s own Ford dusted Duke with Bobby Davis Jr. during their 1989 championship season. Duke City was shuttered in 2004 long after Luna moved his Outlaw promotion to Southern New Mexico Speedway in Las Cruces, which was replaced by Vado in 2019.

Amtrak passed native schools at San Felipe Pueblo where Hollywood Hills Speedway opened with the World of Outlaws on March 10, 2002. A dirt track next to a casino should have been a rousing success but was flawed from the jump. Its sandy half-mile tore such holes that racing was halted 24 hours for industrial smoothing. Structures were so shaky that engineers padlocked the place in the name of public safety. Steve Kinser kicked Hollywood tail: undefeated in seven starts.

New Mexico was 1945’s best place to test a nuclear weapon without anyone noticing. Roswell may well have welcomed aliens from outer space. No one can say for certain because no one lives there. Northern New Mexico however, is a fascinating string of artist colonies where landscapes are breathtaking. Taos looks like a great place to paint a portrait. Our train climbed to 7835 feet at Raton Pass and brushed Colorado’s southern border. I swear we touched Oklahoma’s panhandle but am still uncertain. Determining precisely where one is during train travel is difficult because there are few signs like a motorist might rely on. I scanned water towers and post offices but they too are tough to read at 70 MPH.

Kansas is best seen at night. I have never relished driving its length or width. The Jayhawk State contains miles and miles of virtually nothing. Its turnpike has overpasses for cattle but few towns for humans.

We docked briefly in Dodge City, where the World of Outlaws have raced 24 times since Dodge City Raceway Park was paved in 2004. Schatz (5), Joey Saldana (5), Daryn Pittman (4), Danny Lasoski (2) and Jason Sides (2) have doubled down in Dodge, which does not yet appear on the 2020 schedule.

Hutchinson was another Kansas depot. Hutch is home to the Kansas State Fairgrounds that staged its first auto race in 1909 and remains active 110 years later. The Outlaws have never tempted the big half-mile though its rival USA club did in 1989 when Kinser crashed leading and “Bullet Bob” Ewell became so elated to defeat Sammy Swindell that the low key Texan tossed his gloves to the crowd. Outlaws did appear west of town at the Hutchinson Raceway Park, also known as Salt City Speedway when Luna and Lasoski won the 1990 Wheat Shocker Nationals. Kinser won the first two of four (1991-94) before HRP closed in 2011.

The World of Outlaws have raced on four different dirt ovals in Topeka: Sunflower Expo Fairground (flattened in 1981), Topeka Raceway Park (plowed under in 1996), Heartland Park’s drag strip hairpin (1999-2000) and its current Heartland oval. El Paso native Dub May won two of four Sunflower shows in 1979. Kenny Jacobs topped the only TRP trip in 1992. Hillenburg won three of five on the temporary NHRA site before Lasoski and Schatz split the last six in 2001-2008.

Amtrak covered the vast 455-mile expanse of Kansas from southwest corner of Cimarron National Grassland to the northeast corridor of Kansas City, where a fourth coach car was added in pre-dawn light. Amtrak acquired college kids in Lawrence. Things got crowded. If I had to uncover the seat beside me, I hoped for a drowsy coed in cute pajamas. Instead, I made room for some fuzzy buffoon in a Chiefs cap who startled me from semi-sleep by spilling Pepsi on my hip. Still want to ride the train?

K.C is a racing town, less so than decades ago but no different in that respect than Sacramento, Los Angeles, Phoenix, Dallas or Memphis. Kansas City spawned the Weld family: Greg, Kenny, Jerry, Taylor and Rick, who collectively won five Knoxville Nationals. There was Parkville’s Gene Gennetten and Texas native Junior Parkinson settling in Gladstone, MO. They raced in Riverside Stadium, Olympic Stadium and Lakeside Speedway without leaving what is now the I-435 loop.

The Outlaws have tried three versions of Lakeside. Doug Wolfgang won three of five club contests before the original half-mile closed after his 1988 Jayhawk National success. New Lakeside opened in 1989 as asphalt arena, hosting the organization’s first event on such a surface. Unfortunately, it is forever known as the pavement that nearly killed Wolfgang in 1992. Sammy swept three of four on K.C asphalt. Dirt became Lakeside’s surface in 2000. Kinser (3), Pittman (2) and Schatz (2) then achieved multiple Lakeside wins. The 2020 World of Outlaws Sprint Car Series will return to Lakeside on Friday, October 16.

Northeast of K.C about 25 miles brought our train through Kearney, which was home to 1975-76 Knoxville Nationals winner Eddie Leavitt. Ed toured with The Outlaws in 1981 and beat everyone at Tri-City not named Wolfgang. We were just north of Moberly Motorsports Park where The Wolf ate The Outlaws in ‘89. La Plata’s historic train platform annually gathers railroad ladies and gentlemen much like Knoxville attracts sprint car followers. Kirksville was home to Sonny Smyser, who raced the Eldora finale of 1978 with wings over head, nose and tail.

We skimmed Iowa to Fort Madison and across the last remaining double swing-span bridge over the mighty Mississippi River into Illinois. When the train stopped in Galesburg, I bid new friends farewell and hopped Trailways bus to Indianapolis, arriving about four hours too late for the Performance Racing Industry trade show. In fact, our bus was detoured to allow trade show transporters to escape. Brother whisked me off to his Speedway chalet to hang window treatments for a few days until Three (semi) Wise Men made their way into Pennsylvania’s Lehigh Valley and mother’s warm embrace. 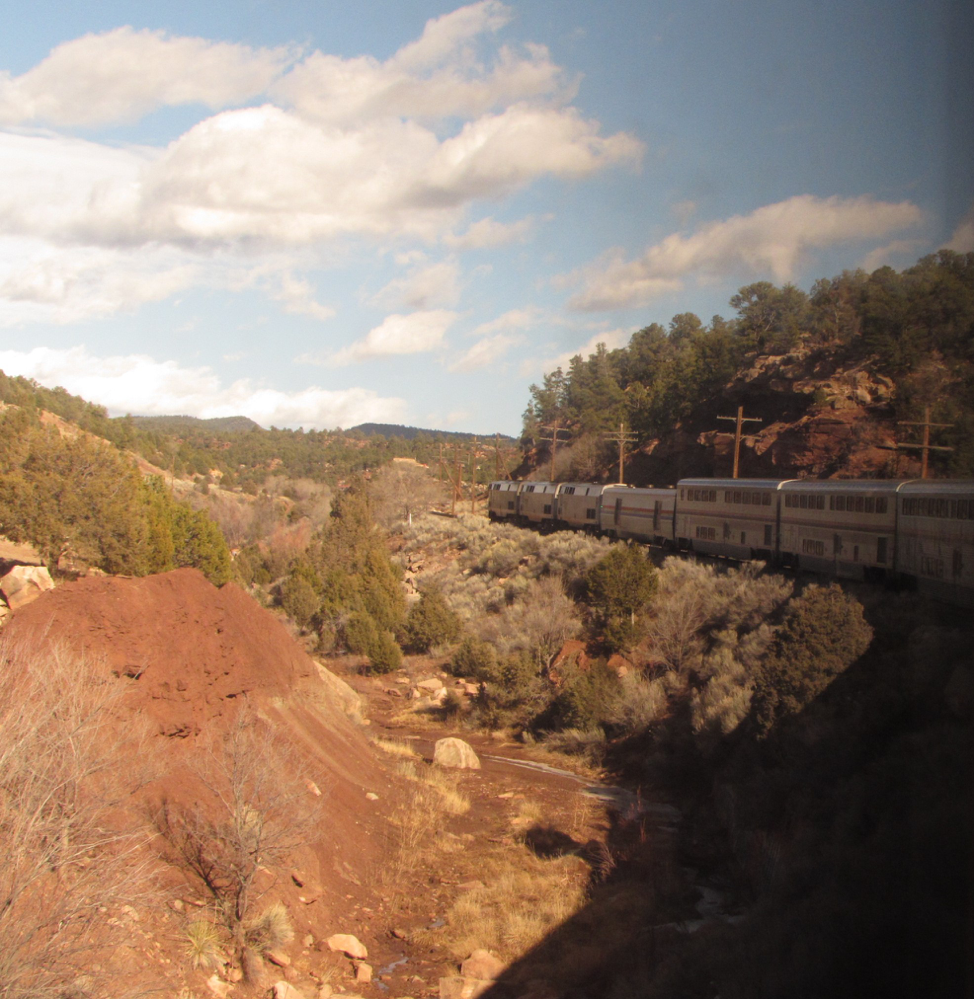 Make no mistake: 47 hours on train and bus was one royal discomfort. I was unconscious for no more than two hours at any given stretch. Train food is bland and overpriced. To those who whine of 15-hour flights to Australia, I scoff. However, as I sit surrounded by Christmas carols, glorious kitchen smells and smiles from those I love the most, I would do it again tomorrow because Christmas is for family.