BY THE NUMBERS: How Brad Sweet, Donny Schatz stack up at The Dirt Track at Charlotte 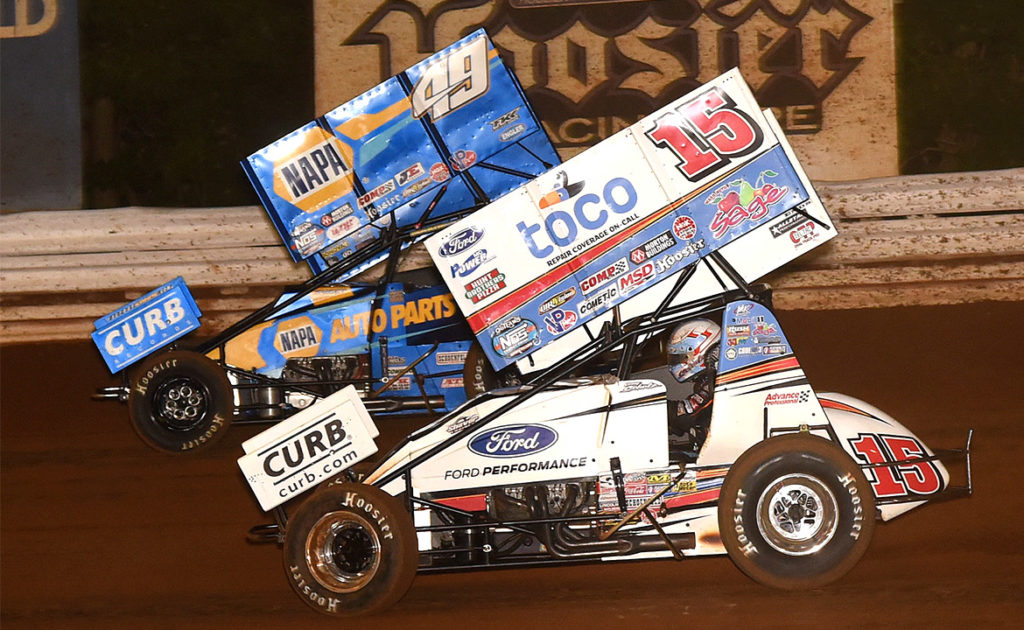 Brad Sweet currently leads reigning champion Donny Schatz by eight points heading into the final two races of the year at The Dirt Track at Charlotte. Sweet is chasing his first championship, while Schatz is hunting his 11th title – sixth in-a-row.

They’ve been the most consistent drivers this year. Both have finished outside the top-10 only seven times in 70 races. They also both have more than 40 top-five finishes – Sweet, 45, and Schatz, 46.

Sweet will end the season as the winningest driver – the first time in seven years someone other than Schatz ended the year with the most wins. That statistic will help Sweet secure the championship if there is a tie in points after the final race. The tie breaker is determined by the greatest number of wins during the season.

They’ll have two races at The Dirt Track at Charlotte to put a period on their historically close points battle and be crowned the 2019 World of Outlaws NOS Energy Drink Sprint Car Series champion.

Here’s how Sweet and Schatz have performed at The Dirt Track at Charlotte since 2014 (Sweet’s first full-time season):

BRAD SWEET
Sweet has yet to win at the 4/10-mile Charlotte dirt track, however he is the winningest driver on 4/10-mile tracks this year – two wins at the Jackson Motorplex and one at Lernerville Speedway. His best finish at Charlotte, so far, this year is fourth in May at the Patriot Nationals.

Sweet on going for his first championship:
“We’ve won the Kings Royal and the Knoxville Nationals, the next thing to do would be to win a World of Outlaws championship. You only get these opportunities so often. We’ve never been in this situation before, this close to Donny. You never know what next year brings. We just really want to capitalize on the opportunity we have in front of us. It’s never easy to beat a ten-time champ, so we know we have to be perfect.”

DONNY SCHATZ
Schatz has led laps and won at least one race at the Charlotte dirt track every year since 2015. His best finish at the track this year, so far, is seventh in May. He led 11 laps in May before blowing a tire. He also gained eight points on Sweet during the May Patriot Nationals doubleheader.

Schatz on going for his 11th championship:
“I have all the faith in the world in everyone at Tony Stewart Racing. I’ve been here twelve plus years and I hope I’m here that long going forward, still being competitive. Right now, we’re at that point where we’ve got to build back up to where we want to be, the king of the hill. We’re not there right now but that’s part of it. We’ve been in that position for a long time. We’ll get there again.”

THE DIRT TRACK AT CHARLOTTE
In May 2000, the state-of-the art dirt track was completed across Highway 29 from Charlotte Motor Speedway. It seats a 14,000 people and hosts events such as the Patriot Nationals, World Short Track Championship and Can-Am World Finals.