At a Glance: Volusia 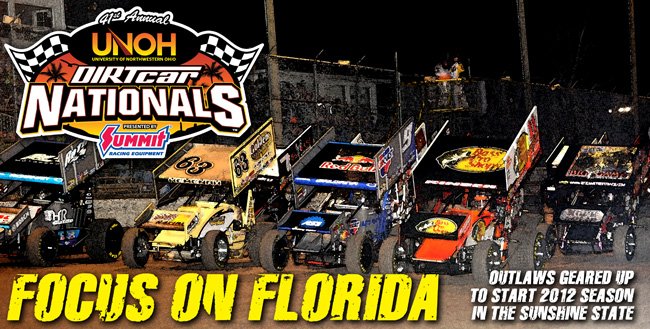 Tickets can be purchased by clicking www.WorldofOutlaws.com/tickets or by calling (877) 395-8606.

Volusia Speedway Park is a semi-banked, half-mile oval with 75-foot wide straightaways and 75-foot wide turns. The track record of 12.569 seconds was established by Paul McMahan on February 10, 2011.

Tune in: Listen live as the Voice of the Outlaws, Johnny Gibson, calls the action at all World of Outlaws Sprint Car Series events on the DIRT Radio Network, with a number of events throughout the season being featured on the DIRTVision Cybercast. Visit http://www.DIRTVision.com for more information on all the features, including updated results from each night of racing as well as a chat room to interact with other fans listening to the racing action. Also, be sure to check out the all new official Podcast of the World of Outlaws Sprint Car Series, Outlaws Unleashed, in the iTunes store or at http://www.WorldofOutlaws.com.

Up Next: Following the events in Florida, the World of Outlaws venture west for the month of March, beginning with a race at The Dirt Track at Las Vegas in Las Vegas on Thursday, March 8.