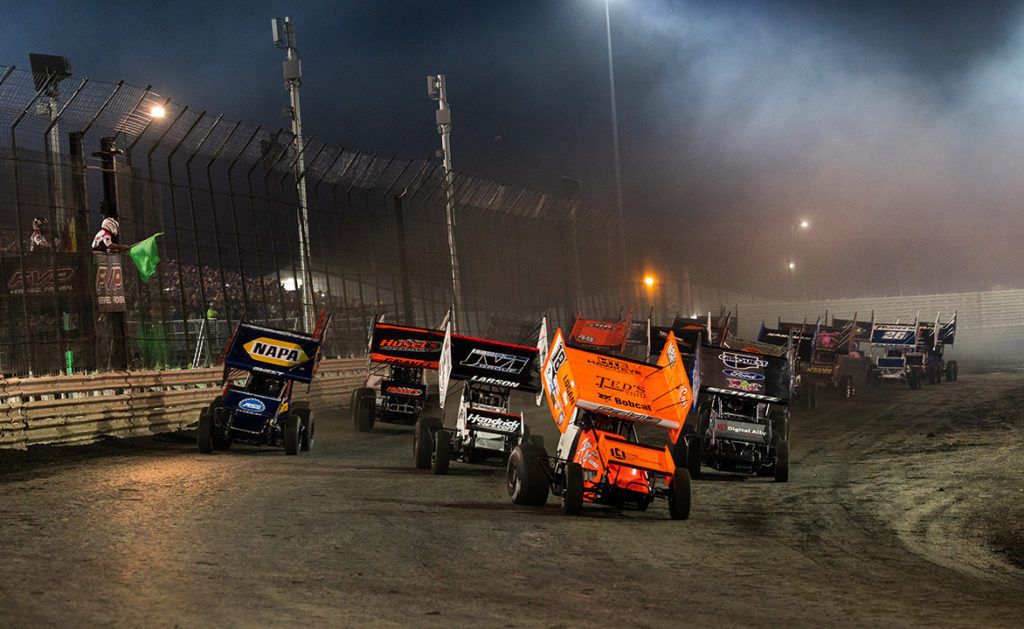 The Granddaddy of Them All is back. For the 61st time, Knoxville Raceway will hold the coveted NOS Energy Drink Knoxville Nationals presented by Casey’s on Aug. 10-13.

As one of the biggest World of Outlaws NOS Energy Drink Sprint Car Series crown jewels of the year – boasting a nearly million-dollar purse for the four days of racing – the best Sprint Car drivers in the world will invade the city of Knoxville, IA, along with tens of thousands of fans.

Parking lots around town will fill with race haulers. Yards will house a maze of campers. The track’s nickname of Sprint Car Capital of the World will come to life between the weeklong on- and off-track activities.

Notables: After years of trying, Kyle Larson finally earned his first Knoxville Nationals victory last year, and then went on to claim the 2021 NASCAR Cup Series championship. This year, he’s already confirmed to return and defend his title and try to become the first back-to-back winner since Donny Schatz went on his string of victories from 2011 to 2015.

In total, Schatz, the 10-time World of Outlaws champion, has 10 Knoxville Nationals victories. His last was in 2017. In a 20-year span, Schatz finished first or second in the prestigious event, including his runner-up finish to Larson last year. Schatz and his Tony Stewart/Curb-Agajanian Racing team will be poised to keep that streak alive.

Three-time and defending World of Outlaws champion Brad Sweet finished third last year, but wore an expression of dejection throughout the night after. Hungry to find Victory Lane again, Sweet and his Kasey Kahne Racing team will look for their second Knoxville Nationals victory in August – three years after their first in 2018.

Home track hero and four-time 410 Sprint Car Knoxville track champion Brian Brown is still searching for his first Knoxville Nationals victory. With a third-place run and then a victory against the World of Outlaws at Knoxville in June, Brown got an early start of forming a winning program for the Nationals.

Carson Macedo, in his second season driving for Jason Johnson Racing – who won the Knoxville Nationals in 2016 with Jason Johnson and in 2019 with David Gravel – is ready to take his turn winning the Nationals in the JJR #41 car. He finished fifth both nights with the World of Outlaws in June and won a track event in May.

A host of drivers from across the world will be aiming for the victory this year, including this year’s Kings Royal winner Brent Marks. To keep up with the entries as they come in, follow the World of Outlaws social channels on Twitter and Facebook.

If you can’t make it to the track, you can watch the entire week of racing from Knoxville Raceway live on DIRTVision, only with the Annual Platinum DIRTVision FAST PASS. The Knoxville Nationals is not included in the Monthly Subscription.