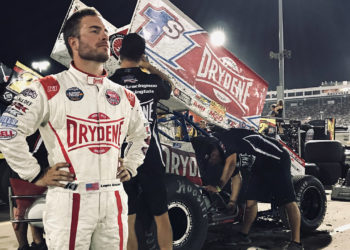 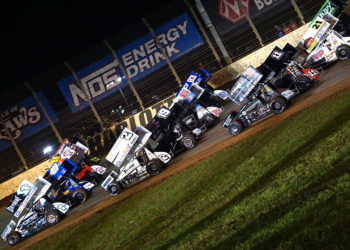 Track History
The Knoxville Raceway, located on the Marion County Fairgrounds, began as a track for horse racing. The first automobile race was held in 1901. Johnny Gerber and "Speed" Adams were among the drivers featured between 1927 and 1936 during racing’s growth in popularity.

Racing came to a halt in the early 1940s due to the war, and returned late in the decade with hot rod racing. Soon after, midget and stock car racing became common.

In 1954, weekly racing began at the Knoxville Raceway. By this time, lighting was added to the track, along with new fencing. Stock car racing was the primary attraction, which were passenger cars stripped of glass, innards and extra metal. Roll cages were often constructed inside the car as a safety precaution.

Events at the Knoxville Raceway were promoted by the Southern Iowa Stock Car Racing Association until 1956, when Marion Robinson took over as promoter. During Robinson's tenure, "modifieds", (a stock car with modifications made to the engine), and "supermodifieds" (modifieds with the car bodies cut away to eliminate weight), were the rage. Eventually, tubing replaced the car frames, giving way to the sprint car as we know it today. Under Robinson's leadership, the Knoxville Nationals were born.

P. Ray Grimes came into leadership at the Knoxville Raceway in 1974, promoting races until 1977. Grimes' legacy includes extending the length of the Knoxville Nationals to four days.

1977 brought about a new Race Director, Ralph Capitani. Capitani continued to build on the growth of his predecessors, increasing the payoff for the 4-day Knoxville Nationals event to $100,000. The first tape-delayed broadcast of the Nationals was in 1987, with the first live broadcast in 1993.

Camping Price
camping at the North Campground for $160 for 4 days. Water and electric hookups are available.