A hand hanging out of a car window lies motionless in the dewy Florida grass. As a crew member checks for a pulse, other safety workers begin assessing the options for extraction and prepare a neck brace and backboard so that they can stabilize the victim once the driver is out. Sliding a specially constructed sling underneath the driver, the rescuers hoist the driver out through the roof and gently lay him on the ground for further assessment. The driver being extracted is actually World of Outlaws Sprint Car Series Director Carlton Reimers, and this is not an accident scene. This is a classroom.

As part of the continuing effort to make racing safer, World of Outlaws and DIRTcar Racing Officials gathered behind Volusia Speedway Park on a dank Florida morning for comprehensive hands-on safety and rescue training by ESI Race Track Safety Services as a part of their Short Track Incident Response Program.  The SFI-accredited course ran participants through a myriad of stations, allowing hands-on skill-building in situations such as airway and hemorrhage management, helmet and Hans removal, fire suppression and controlled rollover.

“I think the guys had their eyes opened,” said Instructor Blaine Bates.  “They learned about tools they had never heard of and techniques they had never thought of, so I think everyone walked away with some lessons.” 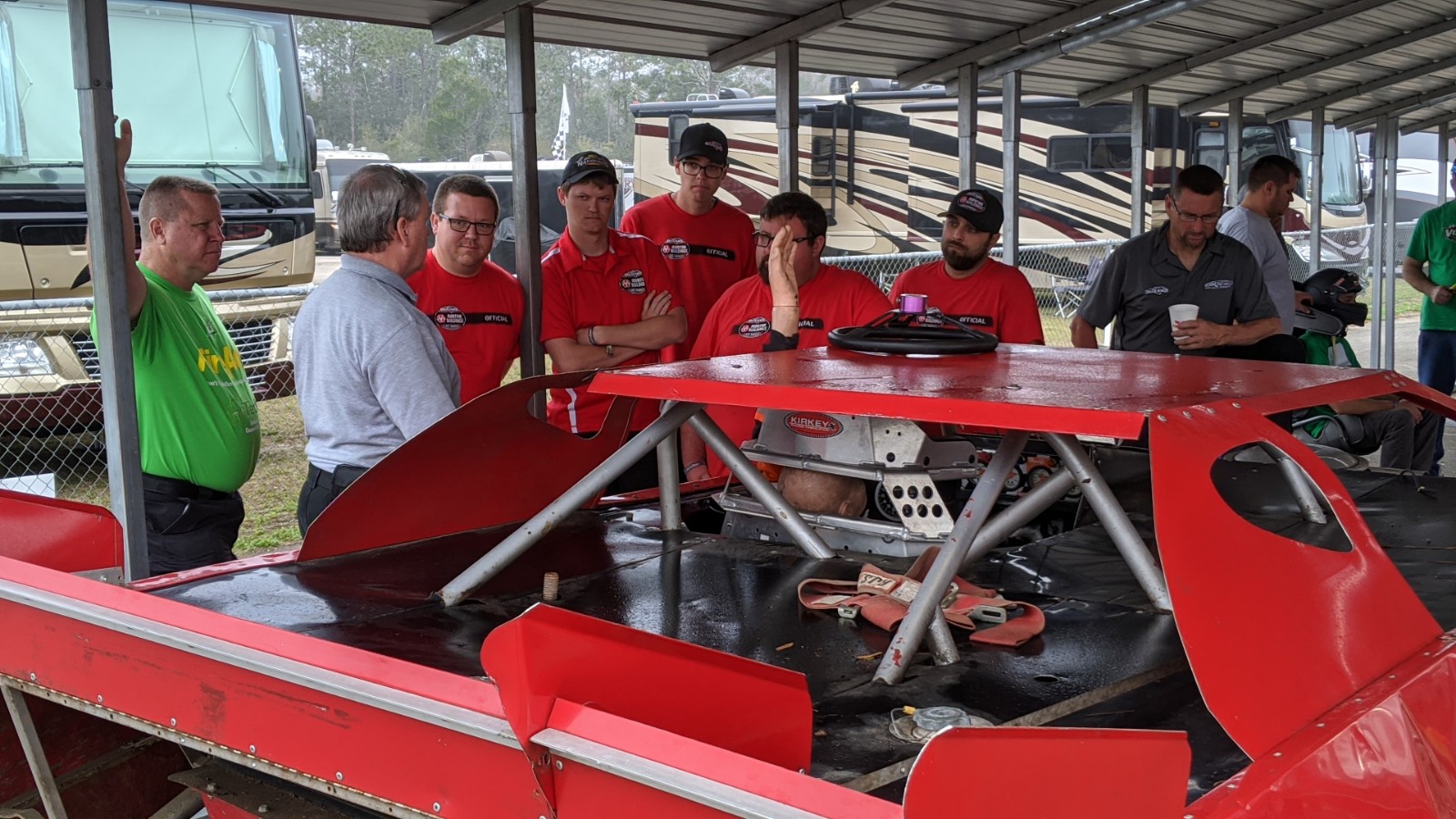 After seeing the training course up close at last winter’s PRI show, World of Outlaws Sprint Car Series Technical Director Tom Devitt and World of Outlaws Late Model Series Safety Coordinator Tyler Bachman knew they had to find a way to bring this training to their touring series. While the course is mainly marketed to track owners and promoters, Bachman, who is also an experienced firefighter, saw the value of bringing that same methodology to the series. Because the series doesn’t travel with its own rescue personnel — opting instead to use local fire and rescue units, as well as track-managed safety workers — this was an opportunity for crew members and officials to get up-close and hands-on training outside of their everyday realm.

“Even if you only learn one thing, it was worth it for us as a company. To get us to the next level, I think we do things like this to get there,” said Bachman. “We learned some new techniques, like different ways to cut out seats and roll over overturned vehicles. It was important for us to have everybody involved, including the series directors, the guys in the tower and our on-track people. Now everyone understands what is going on and can jump in if they need to. It also helps people who aren’t down on the track understand the time and effort it takes to do this so nobody seems rushed.”

Super DIRTcar Series Tech Director Mark Hitchcock experienced his first training of this kind. After the course he reflected, “I think that the whole thing was a good overview of safety applied under the motorsports banner. These guys go to race tracks and they have guys on staff that can do extractions, first aid and some of the basic stuff, but some of those guys don’t know how to take a helmet or a Hans device off of a driver. For us, because we travel to other sanctioned tracks, we need to be able to relay that message of safety and show local track personnel that they can elevate their skill sets by being introduced to a motorsports safety program such as this one.” 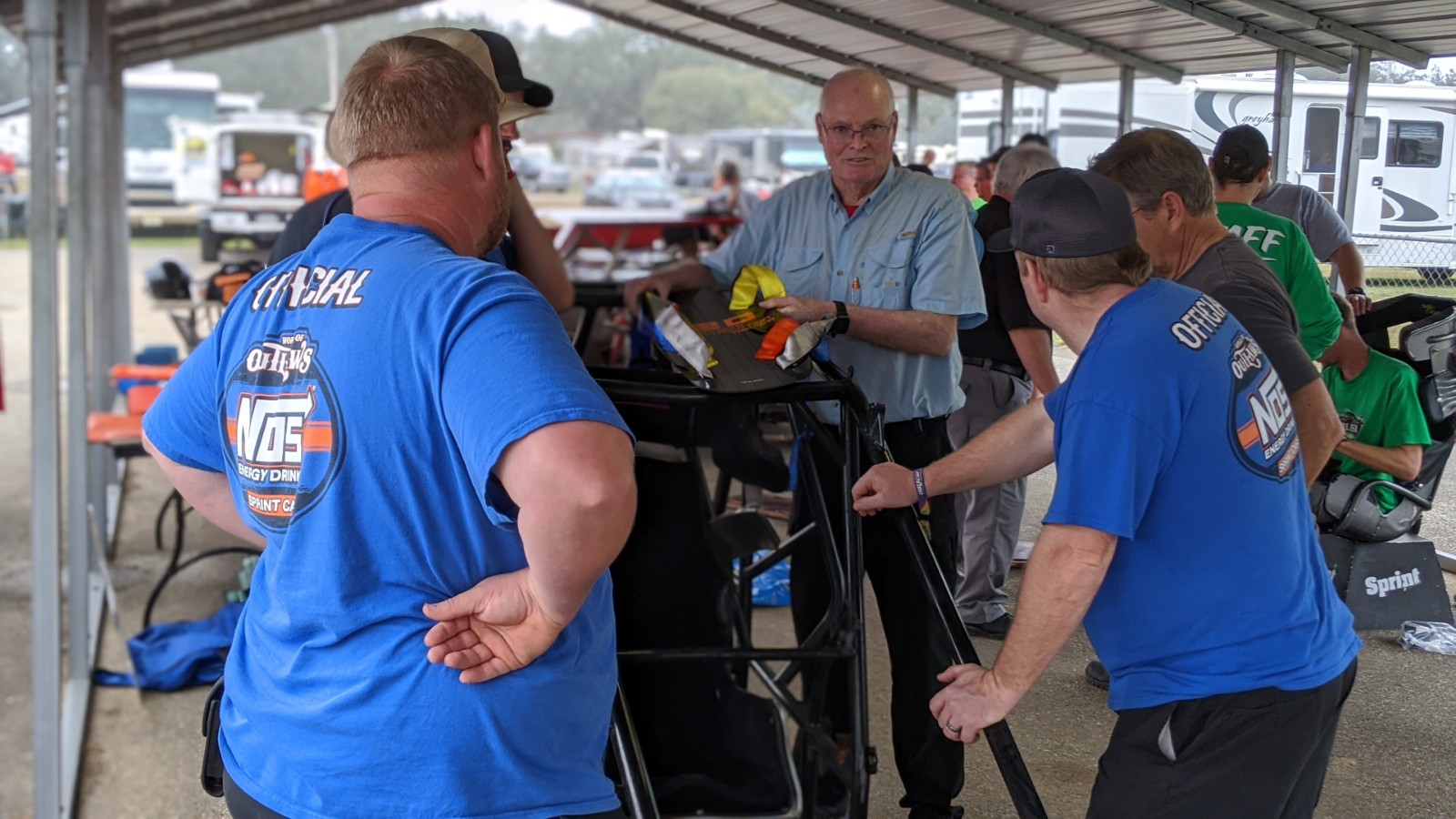 After wrapping his up his stint as a crash test dummy, Reimers said, “I thought it was very comprehensive and really opened my eyes to how intricate extricating a driver can be. I mean, who would have thought that a Sawzall with a special tipped blade was faster at cutting through a frame than the Jaws of Life. That’s only in certain situations, of course, but I would have never known. I hope we do more of this training in the future.”

The course is available for track owners, local rescue crews, and any other motorsports affiliated company that might benefit from it. To request a Short Track Incident Response Program at your facility, or attend a scheduled class, contact: