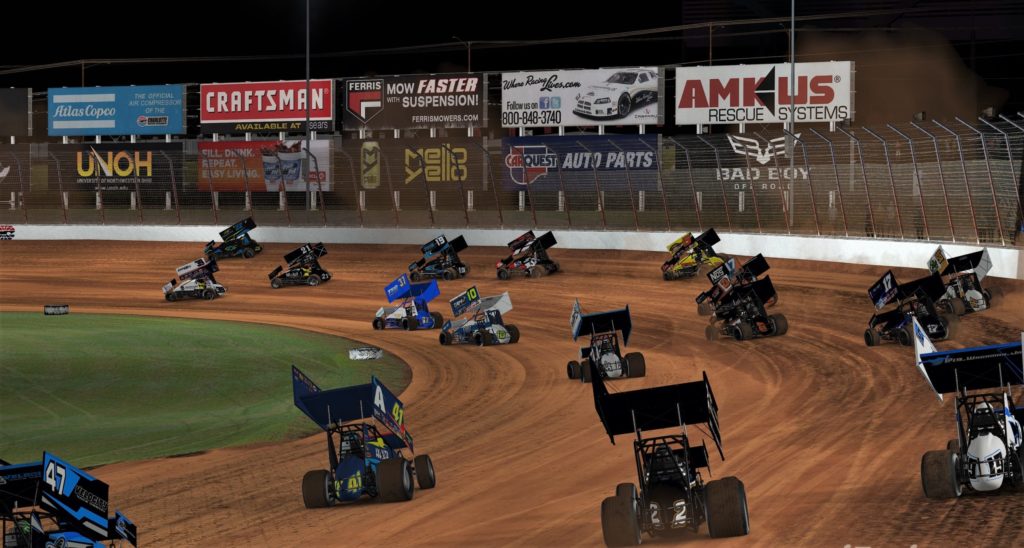 CONCORD, NC — An incredible three-car battle for the lead in the World of Outlaws NOS Energy Drink Sprint Car iRacing Invitational Sunday night on DIRTVision at The Dirt Track at Charlotte was the icing on the cake in an exciting night of virtual racing.

Kevin Swindell, Logan Seavey and Aussie Jock Goodyer raced side-by-side-by-side until they couldn’t. Ultimately, it was Goodyer who took the $1,000 checkered flag on a night when fans and competitors went to social media to talk about the second World of Outlaws NOS Energy Drink Sprint Car iRacing Invitational.

It’s almost go time for tonight’s @WorldofOutlaws Invitational Race on @iRacing. Be sure to catch it live on @dirtvision pic.twitter.com/kWnHhxz6Uz

@CaleThomas91 getting prepped for tonight’s race @TheDirtTrack . Hoping for a little better luck than the last one. @WorldofOutlaws. All the action can be caught on @dirtvision pic.twitter.com/fK7vpfbqaP

This is the sim racing equivalent of getting a completely new ride. See how it works out for us. https://t.co/Hsi8Il8HtF

Then, as the night evolved, fans from around the country shared where they were watching the event, with many plugged into big screen TVs for the ultimate viewer experience …

@dirtvision Tuned in for the .@WorldofOutlaws .@iRacing race! Should be fun! pic.twitter.com/3NE5zidyRU

Finally, as the racers reached the end of their on-track action for the night, they shared their experiences…

Wasn’t my best showing but it was fun to race again. Thank you @NosEnergyDrink @WorldofOutlaws @iRacing for putting it on. I’ll practice and get better for the next one! pic.twitter.com/0YscnV6Bgc

Damn. Started 7th got to 2nd and fell apart on the last restart. These races are fun. Thanks @iRacing @WorldofOutlaws

Well that one was rough. Leading late and after about the third attempt @GoodyerJock finally got me. Hopefully he can help me out with my virtual chiropractor bill with that money. pic.twitter.com/Rn53O1ynfY

Another top 4 finish tonight at the @iRacing @WorldofOutlaws @dirtvision event for @AustinMcCarl17a! No fancy simulator, just a RR wheel, old @BUTLERBuilt seat & @VinceMccarl spotting Dad! Thanks to everyone who makes this possible! pic.twitter.com/mvntSbfYL4

Makes my heart happy for him he’s able to adapt to so many different ways of doing things and still finds a way to be good at all of it.

Made $100 by winning a heat race on @iRacing thanks to the @WorldofOutlaws, I can finally say I’m a professional sim racer! pic.twitter.com/XSSb50GRAO

Thank you again to @WorldofOutlaws for the opportunity, another learning experience for me. This time more on the set up of the car.

I look forward to the next race, as ex NFL player Bart Scott once said Can’t wait!! pic.twitter.com/iGaWet4BoB

Entertaining night with @WorldofOutlaws and @iRacing.

Thank you to all the drivers who participated. Let’s do it again!

In the end, the media reports started to roll in, recapping the excitement of the night…

“What a roller coaster ride,” says @DavidGravel who raced from the rear of the field to finish on the podium at virtual @TheDirtTrack in Sunday’s @WorldofOutlaws @iRacing event on @dirtvision

Now the focus shifts on Monday night at 7 p.m. to the World of Outlaws Morton Buildings Late Model Series and its first iRacing Invitational on DIRTVision.