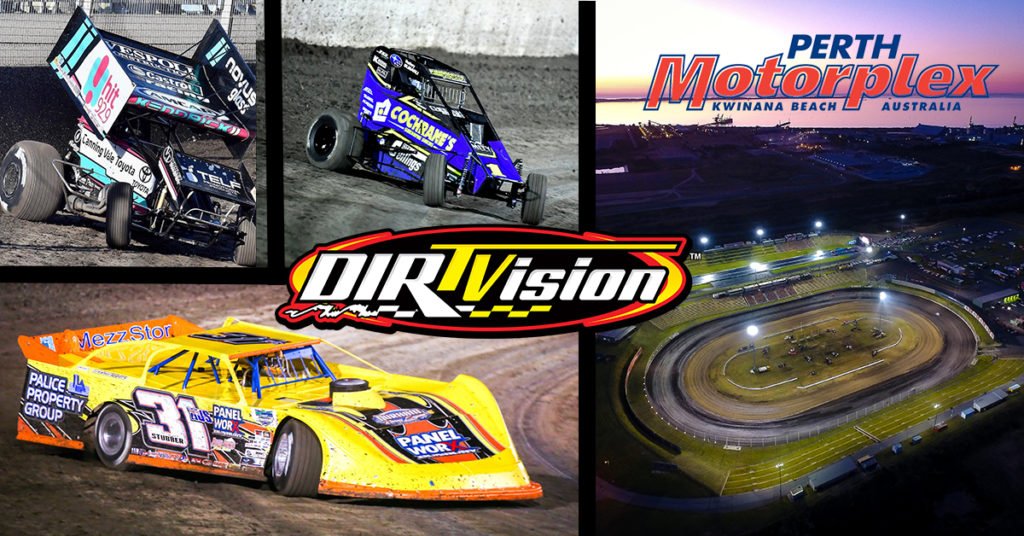 DIRTVision, world leader in dirt track live streaming and home of the World of Outlaws, announced today a partnership with Perth Motorplex to live stream races from the ultra-fast 1/3-mile speedway to fans in both Australia and American, as well as across the globe, for the first time ever.  Celebrating its 20th anniversary season, Australia’s West Coast Motorplex is known for the many slide jobs delivered on a track where the outside wall often doubles as the cushion.

Coverage begins Saturday, October 26, with the season opener, Shannon’s Power Palooza. The blockbuster event kicks off at 5:00 p.m. in Perth with two hours of drag racing, followed by two hours of Sprint Cars, Late Models, Speedcars (Midgets) at 7:00 p.m. in Perth — 7:00 a.m. eastern in the United States — capped off with a burnout contest.

While big events dominate the calendar at the Motorplex, American stars will take to the track during the John Day Classic Western Australia Sprintcar and Speedcar Title for the Race Heard around the World.  USAC National Midget points leader Tyler Courtney will join Pennsylvania’s Alex Bright and New Zealand’s Michael Pickens against the best drivers from Australia in pursuit of the massive AU$14,000 winner’s share of the AU$50,000 purse… unless of course they have the guts to start from the rear of the field, in which case a win is worth a whopping AU$39,000!

Widely known for having one of the strongest Dirt Late Model programs in Australia, Perth will welcome American standout Tyler Erb this year as one of the first Americans entered to take on Australia’s defending Champion Paul Stubber (also a veteran of the U.S. DIRTcar Summer Nationals), along with Brent Vosbergen and others January 8 and 11 for the Australian Late Model Championship, the most prestige Dirt Late Model event in the country.

“Perth Motorplex is a standout in the Australian speedway scene, and adding their events to our calendar is consistent with our mission to keep DIRTVision the home of the highest quality racing from around the globe,” said Brian Dunlap, Director of Broadcast for DIRTVision. “We know that Australian fans will be excited to watch, and we are proud to add more high-quality Sprint Car, Late Model and Speedcar (Midget) racing for our American customers.”

All 12 events from Perth Motorplex will be available to Australian and American subscribers — and other subscribers across the globe — with either a Late Model or Sprint Car FAST PASS, at a price of just US$39 per month.  Individual events will be available on a pay-per-view basis with prices starting as low as US$19 per event.

“Perth Motorplex is one of the greatest dirt track’s in the world, and we can’t wait to showcase our facility and drivers on DIRTVision,” said Gavin Migro, Speedway Racing Manager at Perth Motorplex,  “Whether it is a local fan who just can’t make it to the track because they have to work late, one of our mates from the East Coast (Australia) who can’t get to sleep after a night at their favorite speedway, or an American enthusiast who wants to catch a little racing over breakfast, we believe that this is a big step towards broadening our audience at the Motorplex.”

Tune in Saturday, October 26 at 5:00 p.m. in Perth, 5:00 a.m. in the United States, for live coverage of Shannon’s Power Palooza.  See DIRTVision.com for complete schedule and details.