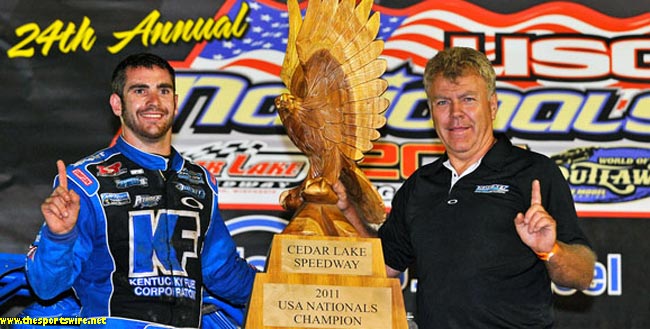 NEW RICHMOND, WI – July 30, 2013 – Josh Richards has good reason to be anxious about visiting Cedar Lake Speedway this weekend (Aug. 1-3) for the 26th annual running of the USA Nationals.

Well, the 25-year-old sensation from Shinnston, W.Va., actually has several good reasons, not the least of which is the fact that he didn’t get a chance to defend his 2011 USA Nationals victory in last year’s crown-jewel event.

“Cedar Lake was definitely one of the (dirt Late Model) races I missed going to the most last year,” said Richards, who spent the ’12 USA Nationals weekend competing in a NASCAR Nationwide Series event at Iowa Speedway in Newton, Iowa. “I love that racetrack and that event. It’s not only one of my favorite tracks to drive on and pays $50,000 to win, but I also have a lot of good memories of that racetrack from when I was growing up to now so it’s definitely, by far, a special place for me.”

With Richards returning to fulltime WoO LMS action this season after focusing on NASCAR stock-car racing for most of 2012, he will make his first start at the three-eighths-mile, high-banked Badger State oval since he registered the most prestigious win of his career in the ’11 USA Nationals. He’ll join his friendly WoO LMS rival Darrell Lanigan of Union, Ky., who captured last year’s USA Nationals for the first time, as a second ‘defending’ champion of Cedar Lake’s summer spectacular, which this year includes a 30-lap, $6,000-to-win WoO LMS preliminary on Thurs., Aug. 1; USA Nationals time trials, heat races and a dash on Fri., Aug. 2; and B-Mains, a Last Chance Race and the 100-lap finale on Sat., Aug. 3.

Richards’s history at Cedar Lake dates back to his days as a skinny kid traveling the national dirt Late Model circuits with his father Mark, who fielded his iconic Rocket Chassis house car for some of the sport’s top names before Josh climbed behind the wheel in 2004. Mark Richards entered the USA Nationals a couple times in the late ’90s with West Virginia driver Tim Hitt and won the race in 2000 with Pennsylvania standout Davey Johnson – a victory that brought Josh Richards to Cedar Lake’s winner’s stage for the first time at the age of 12.

After becoming a USA Nationals champion himself 11 years later, Richards stood in virtually the same Victory Lane spot he did with Johnson and specifically referenced that race in his post-race remarks.

“Back in 2000 whenever Davey Johnson was driving for us I remember coming here and watching the (USA Nationals),” Richards said two years ago. “I was just in awe. I just fell in love with this track at a young age.”

That 2000 Cedar Lake experience with his father and Johnson remains an indelible moment in Richards’s life.

“I remember sitting up there in the stands off turn two and watching Davey run the cushion for a hundred laps,” said Richards. “That was probably one of the races I remember most from when I was younger before I was racing. That’s really about the time I started taking a big interest in racing and really wanting to drive, so you could say that race kind of lit the fuse on my passion for racing.”

Richards also learned something about the fast way around Cedar Lake Speedway during that visit. Five years later, when Richards, then a WoO LMS rookie, made his first competitive start at CLS in the 2005 USA Nationals, the 17-year-old, soon-to-be high-school senior proved to his dad that had been taking careful mental notes.

“I actually thought we were gonna win it in ’05 with Josh,” said Mark Richards, fondly recalling the ’05 USA Nationals that was run over the 60-lap distance and paid $40,000 to win. “He beat (Scott) Bloomquist in the heat race but got a bad draw in the dash and ended up starting 15th in the race. Then he drove up through there just about like Davey did it in 2000. He was up to third and passing for second place with like 15 to go but we ended up getting a flat tire (and finishing 12th).

“We were all a little disappointed about losing a shot at the win like that, but he still did a great job. When he got out of the car I asked him, ‘How did you know how to run that cushion like that?’ He said, ‘I watched Davey do it. I remember how Davey ran this place.’

“That was pretty neat,” continued Mark. “He was 12 years old watching Davey race, and he came back five years later and drove like that. He just watched and remembered how Davey drove the place. That was all him. Nobody told him how to run like that.”

Richards didn’t get another shot at USA Nationals glory until 2010, when the WoO LMS returned to sanction the event. He was a serious contender in that 100-lapper until engine woes knocked him out on lap 18 while running second (he finished 23rd).

Finally, in his third USA Nationals attempt, Richards broke through in 2011. He passed race-long pacesetter Jason Rauen of Farley, Iowa, for the lead on lap 78 and never looked back en route to the richest race win of his already sparkling career.

The elder Richards couldn’t help remembering 2000 after his son added his name to the all-star list of USA Nationals winners.

“Anytime Josh wins a race you start thinking, It ain’t all that long ago when he was just a kid riding along in the truck,” said Mark Richards. “When we got up on that stage (at Cedar Lake), you think, Man, it seems like we were just up here a little while ago with Davey.”

Richards enters this weekend’s USA Nationals as a heavy favorite to duplicate his 2011 success. His ’12 performance dictates that. He’s been atop the WoO LMS points standings since the second race of the season and as of July 30 stood tied with Lanigan for winningest-driver status, with seven victories.

“I’m definitely looking forward to that race,” said Richards. “It’s an awesome atmosphere there. The race fans are great – everyone usually hangs out after the races and has a good time – the track crew does a great job with the track and the race pays real well. It’s got everything on the list checked off.

“There’s gonna be a lot of great cars there,” he added, “but hopefully we can do it again. Winning at Cedar Lake is just a great feeling.”

OUTLAWS AT CLS: Richards and Lanigan will be joined in this weekend’s USA Nationals field by nine other WoO LMS regulars, including:

RECRUITS: The 2013 FANSFund – a unique program that solicits donations from fans and sponsors to bring select drivers to the USA Nationals – raised sufficient money to invite 14 drivers to this weekend’s action.

After the recent close of voting for FANSFund drivers, the invitees were divided into two categories: eight regular FANSFund drivers (those that have never been to the USA Nationals or have not attended for at least the past two years) and six ‘All-Star’ drivers (past FANSFund invitees whom fans want to see back at Cedar Lake).

FANSFund officials confirmed that each of the 14 drivers plan to accept their invitations to compete in the USA Nationals. Each racer will receive at least $1,200 of financial support from the FANSFund for participating in this year’s USA Nationals, and the drivers and their crews will have the opportunity to attend the annual FANSFund Luncheon on Saturday (Aug. 3) at 11 a.m. on the CLS grounds.

TOP TALENT: Accenting the WoO LMS travelers and FANSFund invitees on the USA Nationals roster this weekend will be an intriguing cross-section of standout drivers from across the country. Some of the racers expected include:

* Don O’Neal of Martinsville, Ind., who is scheduled to drive Larry Moring’s No. 1.

* Jason Feger of Bloomington, Ill., who plans to make the USA Nationals his first WoO LMS start following the conclusion of the three-month suspension from WoO LMS and DIRTcar UMP competition he served after a tire he used during April’s Illini 100 at Farmer City (Ill.) Raceway failed a laboratory test.

* A contingent of Wisconsin drivers that includes Pat Doar of New Richmond (2011 WoO LMS Rookie of the Year and a former Cedar Lake champion), Brady Smith of Solon Springs, Wis. (a starter in eight of the last USA Nationals A-Mains with a top finish of eighth in ’06 and ’12), A.J. Diemel of Elk Mound, Jake Redetzke of Eau Claire, Tim Isenberg of Marshfield and Adam Hensel of Barron.

* Iowa residents Chad Simpson of Mt. Vernon (last year’s USA Nationals fast-timer) and his brother Chris Simpson of Oxford, who have qualified for the USA Nationals A-Main in the same year twice (2007 and ’10) and Jason Rauen of Farley, who finished a head-turning fourth in the 2011 USA Nationals.

* Jeff Provinzino of Hibbing, Minn., who scored a career-best WoO LMS finish of 10th on July 5 at Amsoil Speedway in Superior, Wis.

LOTS TO DO: Cedar Lake officials will once again accent the racing with an exciting array of pre- and post-race entertainment, including a Friday-morning golf scramble at the nearby New Richmond Links Golf Course; the popular Apple River Tubing expedition during the afternoons before the races; the ‘FansFund’ Luncheon on Saturday afternoon that allows contributors an opportunity to meet the drivers they helped bring to the USA Nationals; a driver autograph/meet-and-greet session in the souvenir area prior to Saturday night’s first green flag; trout fishing at the Sun Prairie Trout Farm less than 10 minutes from the speedway (shuttle service available); after-race parties in the Cedar Lake Arena following the Thursday and Friday programs; and the track’s traditional dramatic driver introductions prior to the USA Nationals A-Main.

WATCH AT HOME: Fans who can’t make the trip to Cedar Lake can still catch all the action through a live pay-per-view broadcast of the event over the web produced by DirtonDirt.com. Log on to www.dirtondirt.com for details on purchasing a subscription to view the broadcast, which features a multi-camera shoot, pre-race show and pit reporting from Ben Shelton.

Directions and additional details on the USA Nationals can be obtained by logging on to www.cedarlakespeedway.com or calling 612-363-0479.