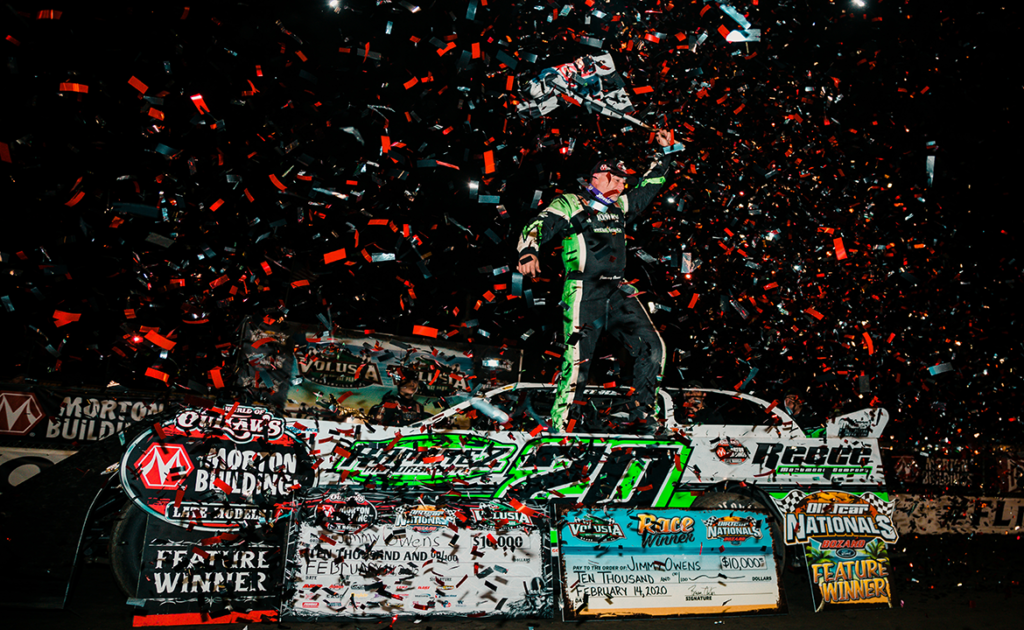 BARBERVILLE, FL – Feb. 14, 2020 – For never having won a Feature at Volusia Speedway Park in his previous 49 starts before his win on Thursday night, Jimmy Owens made going back-to-back on Friday night look easy as he led 24 laps of the Feature en route to his 17th career victory with the World of Outlaws Morton Buildings Late Model Series.

“It’s pretty awesome,” Owens said. “Our car was flawless last night. We were really good tonight, not as good as we needed to be.”

The O-Show certainly was good, backing up his first-ever victory at the DIRTcar Nationals presented by Bozard Ford with his second in two days, fending off a relentless Mark Whitener in the early going, then going on to survive several restarts in the late stages to collect $10,000 for his efforts across 40 laps.

Kyle Bronson, of Brandon, FL, scored his second podium finish of the week after an amazing charge from 15th, and Darrell Lanigan got hot in the closing laps on the bottom, challenging Bronson after the final restart and coming home third.

At the drop of the green, it looked as though Middleburg, FL-native Mark Whitener was going to have a shot at redemption and Victory Lane, as he immediately grabbed the top spot from the outside pole and jumped out to a sizeable lead in the early going.

As Whitener was maneuvering through lapped traffic, Owens was making significant headway. He caught the rear of Whitener by lap 13 and made the pass down the backstretch the next time by.

But Whitener wasn’t done. He re-gathered his momentum on the top side and came flying by Owens once more to retake the lead on lap 16. Owens continued his pursuit of the lead down low and stole it back on lap 18 as Whitener bulldozed the big cushion in Turn 4.

“We had the cushion up there to hold us in the lead, and we passed Whitener then let him get back by and was able to get back by him. All in all, we held on,” Owens said.

Whitener dug up the cushion again after a restart on lap 20, which cost him dearly, as he fell from second to 10th in a matter of just one corner. He made up some ground in the next few circuits but dropped out of the race five laps later – a 22nd-place result for the Speedweeks hopeful.

“I just had to stay off the cushion, that was the biggest deal, because it was pretty treacherous up there,” Owens said.

Meanwhile, Bronson had been making major progress towards the front of the field. Killer broke into the top-eight from his 15th-place starting spot by the halfway point and had a full head of steam going forward. By the lap 25 restart, Bronson was in the top-three and pounding the cushion, as he’s done effectively so many times at Volusia. He drove around Sheppard on the restart and began his pursuit of leader Owens, playing heavy defense through the final 15 laps.

Lanigan poked his head in the top-five right after halfway and held it there consistently, driving all the way up to third on the low line by the final restart with five laps remaining.

“I knew if I was going to get up there and just follow them guys, I was never going to get around them. So, I was just trying to make the bottom work, so if I at least got to them I could try and get by them,” Lanigan said.

That strategy worked, as he took the green on the final restart and drove underneath Sheppard for third. Quickly setting his sights on Bronson, the Union, KY-veteran went on the attack immediately and caught Bronson in a pinch going into Turn 1 with two laps remaining.

“My car was pretty good up top, and I saw [Lanigan] on that one lap, what happened was I was about out of tear-offs and I couldn’t really see. So, I got over the cushion and let him by me,” Bronson said.

The Bluegrass Bandit rode in second down the backstretch and drove hard into Turn 3, but did not come out of Turn 4 with the spot.

“I overcharged [turn] three too hard, just trying too hard,” Lanigan said. “I missed the bottom a little bit and hung in the middle, then I let [Bronson] get back by me and it was pretty much over with by then.”

Still hooked up on the top side, Owens paraded the field back around to the checkered with Bronson and Lanigan following. Bronson seemed the most impressed with his performance over 40 laps, picking up the night’s Hard Charger honors with 13 positions gained.

“To start where we started and come up there and pass all them cars on a track like that, it says a lot about my program,” Bronson said.

As for the Viper Motorsports entry, the team made a valiant effort to stay up front, despite Lanigan’s thirst for victory.

“I just wish the top wasn’t so dominant tonight because our car was phenomenal around that bottom,” Lanigan said. “We could run with them around there, we just couldn’t get by them.”

The 49th annual DIRTcar Nationals presented by Bozard Ford comes to a close on Saturday night with The Most Powerful Late Models on the Planet and the Super DIRTcar Series both in 50-lap finale Features, where the Big Gator champions will be crowned!

Northeast tripleheader on tap for World of Outlaws Late Models