DUEL AT THE SPEED PALACE: Zeigler Wins After Intense Battle With Weiss 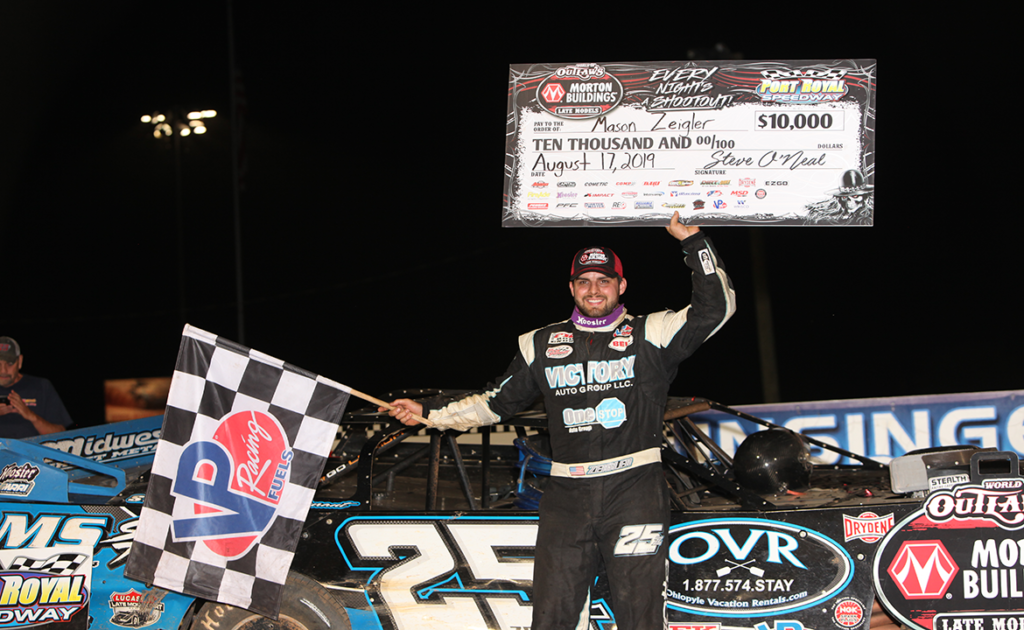 With less than five laps to go, Mason Zeigler was running second and burning to make a move for the lead.

He and Rookie of the Year frontrunner Ricky Weiss battled it out for over 25 laps around the Port Royal Speedway on Saturday night. Their back-and-forth fight for the lead culminated with a side-by-side drive into turn one with three laps remaining of the 40 scheduled. One of them was going to win their very first World of Outlaws Morton Buildings Late Model Series Feature.

In the end, the home-state advantage worked like a charm in the final laps. Zeigler made the winning move with just three laps remaining around the outside of Weiss to seal the deal and win his very first Morton Buildings Feature over Weiss and Brandon Sheppard.

“I’m so stoked for all of my crew,” Zeigler, of Chalk Hill, Pennsylvania said. “This was an awesome one, a really hard-fought one. It wasn’t just given to us.”

How right he was.

Zeigler and Weiss both won their Drydene Heat races earlier in the evening and redrew the front row. Zeigler pulled out to a sizable lead at the drop of the green with Weiss giving chase. The lead changed hands for the first time when Zeigler came up on a lapped car on the top side of turn one and jumped the cushion, opening the door for Weiss down low on lap 17.

Weiss sat in command for the next seven laps before Zeigler regained momentum and blasted by Weiss on the high side. The race’s only caution flew just a few laps later, setting the stage for the boiling point of this heated battle.

Racing past the flag stand to complete lap 37, Zeigler took a deep dive down low into the first turn while Ricky Weiss laid his right-rear tire on the cushion. Weiss had thrown a textbook slidejob on Zeigler on the restart to take the lead, so Zeigler returned the favor with a slidejob of his own to regain the lead out of turn two.

Down the backstretch they raced, Weiss regaining the lead slightly into turn three after crossing back under Zeigler’s slidejob. Zeigler switched back to the line that had kept him up front all night long, right on the high side, while Weiss kept it rolling through the middle groove. Zeigler mashed the throttle on the top and powered around the outside of the J&C Properties #7.

“My only option was just to get up there and murder the cushion,” Zeigler said. “I was so tight through the center and down low, where up top I could really wheelspin it and get sideways and not lose any ground. It was my only option and we were able to make it work, thank goodness.”

From that point on, the “Chalk Hill Express” held command and took the checkered flag, worth $10,000 – his second overall victory at Port Royal in 2019.

Pacing the field under caution with 12 laps to go and a hungry Weiss right on his bumper, some drivers would crack under the pressure. But not Zeigler. He’s got enough confidence in his car and crew to come through in high-stakes situations like these.

“It puts a little bit more pressure on me, starting up front. But I’ve known we’ve had a good enough car to win one of these things,” Zeigler said.

Another solid podium finish for Weiss helped to maintain his runner-up spot in the Series points standings. A perfectly prepared racetrack made for three grooves of racing, which “Slick Rick” took full advantage of in his efforts to hold off Zeigler.

“On that restart, I knew we could run the middle, or the bottom or the top, and I was able to get in front of Mason with [my crew chief] calming me down a bit,” Weiss said. “Mason just ran one heck of a race. He was do-or-die up there and he made it work.”

Brandon Sheppard redrew the fourth starting spot, made a pass for third on the opening lap and managed to stay in the final podium position for all 40 laps. His 29th top-five finish of the year in 31 starts certainly looks great atop the points standings.

“We had a good, balanced racecar again and this thing’s just been awesome, night-in and night-out. We’re definitely not going to hang our heads over third,” Sheppard said.

The World of Outlaws pay another visit to the Eriez Speedway in Erie, Pennsylvania tonight for another 50-lap, $10,000-to-win main event with Hot Laps going live on DIRTVision at 6:30 p.m. eastern!