Sheppard Seals the Deal at Oshkosh 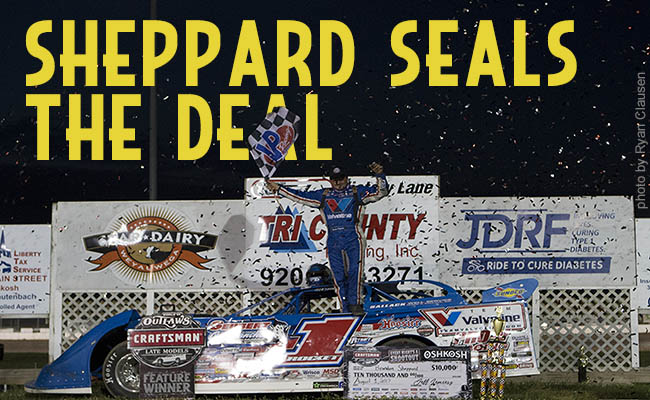 OSHKOSH, WI. — Aug. 1, 2017— The World of Outlaws Craftsman® Late Model Series took the track at Oshkosh SpeedZone Raceway for the first time ever on Tuesday night. Brandon Sheppard sealed the deal for his 12th win of the season by leading all 50-laps of the feature event at the third-mile.

“It seemed like we were in a mad-dash to get ready all night tonight,” said Sheppard. “I don’t know what was up but we pulled through like we always do. There’s a lot of hard work coming out of this team and if we can keep that up hopefully we can keep this run going.”

Sheppard has won the last three Series events including Fayette County Speedway, the Prairie Dirt Classic at Fairbury American Legion Speedway and Oshkosh SpeedZone Raceway. With 12 Series victories so far this season, Sheppard sits only six wins away from reaching the most wins in one season. The record was set in 2016 by his predecessor in the Rocket1, Josh Richards, with 18 wins in one season.

“I’ve driven four different XR1’s this year and every single one has a win on it,” said Sheppard. “Just goes to show how good of a piece Mark [Richards] and Steve [Baker] are building. Hopefully we can just keep getting top-three finishes and everything else will just work itself out.”

Don O’Neal worked tirelessly all 50-laps trying to close the gap on the race-long leader. Sheppard and O’Neal started side-by-side on the front row of the feature but Sheppard took control of the lead early.

On lap 10 Sheppard’s strong lead began to dwindle as he started to approach the tail of the field. With no cautions in the 50-lap event, O’Neal’s biggest aid was lap traffic slowing Sheppard down. By lap 16 the gap between the pair was cut to only .222-seconds before Sheppard was able to pull away from the No. 5 for good. By the time the checkers fell, O’Neal came up short by more than a 5 second margin.

“I think we made some gains on this Peak car tonight and hopefully some things will come,” said O’Neal. “I think we just need to get a little better to be able to run with the No. 1 car there at the end of the race. I thought we had something going but when it came time to be really good we just needed to be a little better.”

While O’Neal was focused on Sheppard, Frank Heckenast Jr. was making moves on Eric Wells who had passed the No. 99jr for third on lap six. Heckenast Jr. was able to reclaim the position on lap 32 and began gaining ground towards O’Neal in second.

Unfortunately, Heckenast Jr. ran out of laps to fully make the pass for second and finished at O’Neal’s bumper under the checker flag.

“Running third behind Sheppard and O’Neal right now is a really good deal, I mean, they’re two of the best so we will take it there,” said Heckenast Jr. “He opened the door for me there with the lap traffic but both of our guys just put new bodies on at my shop the last two days so I wasn’t going to rip them off there in that last corner.”

“Yea I squeezed him down there between one and two and had him pinched off pretty good, so hats off to him for not getting into me,” said O’Neal.

Heckenast’s third place run marks his best finish of the season so far.

“I want to thank my guys,” said Heckenast Jr. “It’s just me and Axle [Wicker] this week. I can’t say enough about that kid. He does a really good job. We’re just a family owned team out here having fun and maybe we will be up there by Sheppard one day.”

The World of Outlaws Craftsman® Late Model Series heads to Shawano Speedway on Aug. 2 for the second of five nights of racing in the state of Wisconsin.

Morgan Bagley almost tied his best run of the season by finishing one spot shy of third.

Bagley had a rough beginning to his day at Oshkosh SpeedZone as he cut his left rear tire on the first lap of his heat race. With a new tire in place, he was able to return to the track but unable to make up enough ground to secure a transfer position into the feature.

Bagley would go on to win the first of two Last Chance Showdowns which placed him near the back of the 50-lap event in 18th. Steadily throughout the feature, Bagley was able to pass cars both high and low impressively finishing fourth by the final lap.