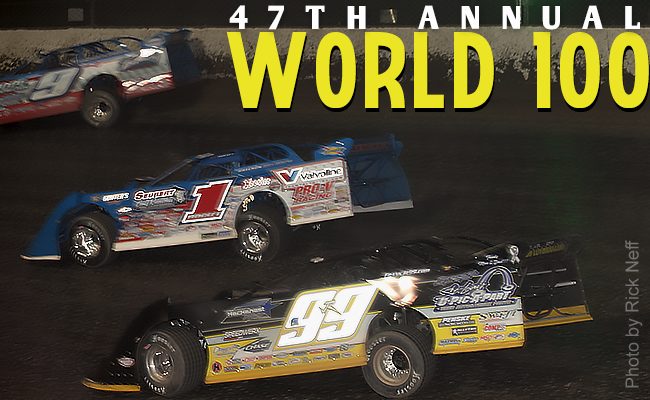 ROSSBURG, OH— September 9, 2017—Jonathan Davenport led flag-to-flag to claim his second career World 100 victory at Eldora Speedway. His No. 49 machine pulled out of the Ohio dirt track and headed back to Blairsville, GA with a $50,000 check and a prestigious globe trophy tucked away inside.

Although six cautions fell among the 100-lap race, Davenport was never seriously challenged for his lead position. Davenport started third in the feature quickly securing the front spot and never looking back. Gregg Satterlee finished where he started the crown jewel event in second and Mike Marlar rounded out the podium.

In just 17 laps, Brandon Overton charged to fifth from his 17th starting position. He continued to wheel his way through the field and found himself with a solid second place run until lap 90 when we got into the wall and quickly fell back to seventh. By the time the checkers had fallen, Overton had fallen back to 11th. An additional hard charger was Dale McDowell who started 25th in the feature and finished an impressive fourth.

Two records were set on Saturday night: A record crowd was in attendance at the historical Eldora Speedway and a record payout for the 50/50 drawing which paid $38,135.

Outlaws in the World:

Madden tied his career best finish for the World 100 with a sixth-place run. His previous sixth place finish was in 2011.

On lap 59 under a caution for Bobby Pierce, Sheppard pulled into the pits and received two new tires on the right side of his car. After starting from the tail of the field of 24 cars remaining, Sheppard was able to grab a top-10 finish.

Young gun, Moran was able to crack the top-10 on lap 67 of the 100-lapper but was unable to hold onto the position. Moran got shifted back one spot behind Heckenast Jr. The pair finished 15th and 16th.

Clanton retired from the race on lap 37. He pulled into the pits under a green flag, never to return to the half-mile track.