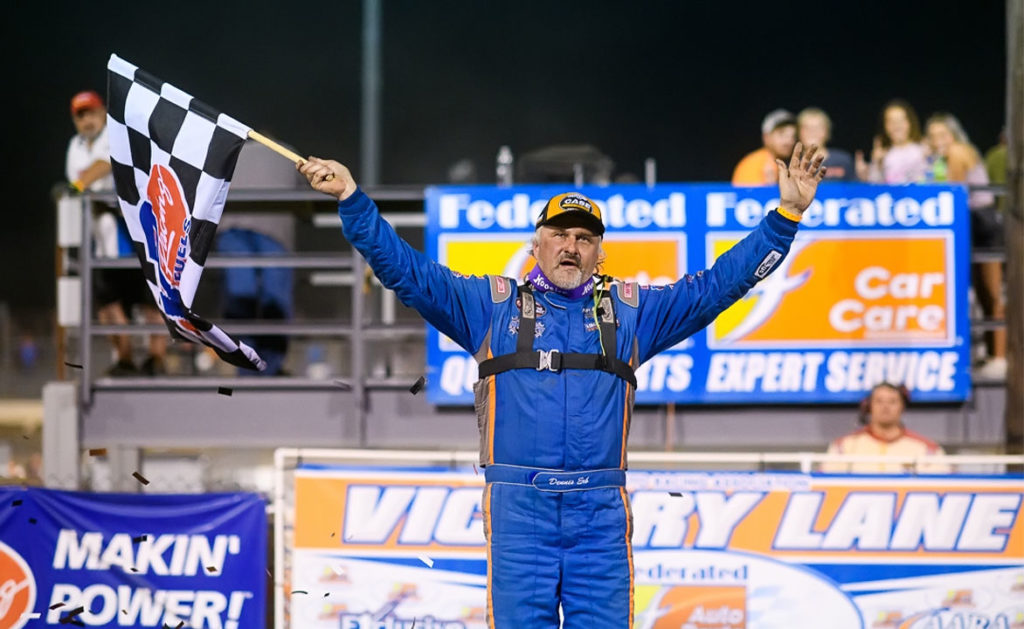 The Carpentersville, IL driver passed Billy Moyer Jr. with 12 Laps to go to earn his third World of Outlaws triumph of 2022

A second chance isn’t something that slips away from Dennis Erb Jr.

However, the veteran Late Model driver needed that second chance Friday at Federated Auto Parts Raceway at I-55 after a caution negated his pass for the lead.

Erb found another opportunity to strike 18 laps later, as race leader Billy Moyer Jr. caught the tail of the field. That’s when Erb dove to the bottom, splitting Kye Blight’s car as Moyer tried to pass him on the outside. Erb took the advantage, thundering past both of them with momentum to take the lead with 12 laps to go.

This time, a caution wouldn’t get in Erb’s way as he bested the top drivers with the World of Outlaws CASE Construction Equipment Late Model Series and DIRTcar Summer Nationals to earn the $10,000 prize on night one of the St. Louis Firecracker Faceoff.

Erb stressed the importance of hitting his marks as a key to finding Victory Lane.

“We really would’ve liked to have gotten [the lead] earlier, but you know we were able to just wait and got it at the right time and was able to make a move on [Moyer],” Erb said. “Our car was working really good around that bottom, and we just had to hit our marks real good.

“Once I got out front, I was able to move up and move around. It was a little slippery tonight, but we were able to go out and get it.”

The four-time Hell Tour champion stated his time running Summer Nationals events the past two weeks gave him the chance to get better, despite his consistency in the first half of the season.

“We spent the last week or so going out and running [DIRTcar Summer Nationals] races,” Erb said. “We tried a few different things to see if we can make ourselves better. So, we picked up on a few things, and hopefully, it’ll help us out the rest of the year.”

The Batesville, AR driver stated he had a good car but started to tighten up once he reached traffic.

“If the whole time we are in clean air, I don’t know if [Erb] would’ve got us,” Moyer said. “His car was just way better than ours maneuverability-wise.

“I couldn’t run that bottom like he did, and hell, I felt like I had a parachute back there. So, I just moved back up and tried to use the whole track. All in all, the car is good, just not as good as his around the bottom.”

Frank Heckenast Jr. crossed the line third, his first podium with the World of Outlaws and DIRTcar Summer Nationals in 2022.

Despite coming home third, the Frankfort, IL driver said his finish felt like a win.

“I screwed up in the Heat,” Heckenast said. “I didn’t screw up in the Heat; I just mean [Shannon Babb], and I had such a good race, and I have so much respect for him. I could’ve tried to slide him, and then I would’ve had the last pill for the fourth heat and started second.

“This feels like a win. We just had so much stuff going wrong lately. When you get that close, it really just tears at you that you had a shot to win.”

“Once we got rolling, the car was pretty good, and it came to life,” Feger said. “It felt really good on the restarts, and we were rolling by guys. We couldn’t get by Frankie at the end, and you know we were probably a little too nice to him.

“But I’m really happy; 12th to fourth against this bunch of guys. The car is fast and in one piece, and maybe we have something for them [Saturday].”

Dennis Erb Jr.’s ability to take advantage of a second chance allowed him to get the edge on the competition Friday at I-55. If having that edge pays off on Saturday, it could be another $20,000 in his bank account.

UP NEXT: The World of Outlaws CASE Construction Equipment Late Models and DIRTcar Summer Nationals return to I-55 on Saturday, June 25 for the second night of the St. Louis Firecracker Faceoff.