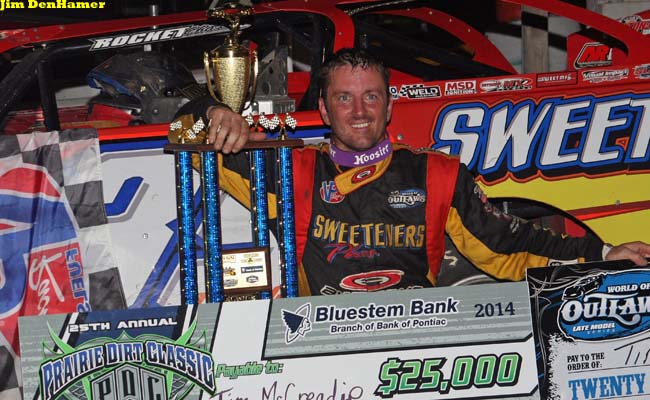 “They said they do it right here and they’re right — they did it right tonight,” raved McCreadie, who earned $25,650 for capturing a thrilling 100-lap World of Outlaws Late Model Series event that featured eight lead changes among four drivers and countless twists and turns. “This is an awesome racetrack, and that race was a lot of fun.”

Charging forward from the 17th starting spot, McCreadie, 40, of Watertown, N.Y., overtook defending PDC champion Shannon Babb of Moweaqua, Ill., for the lead on lap 76 but was far from home free. He swapped the top spot four times with the 40-year-old Babb before gaining command for good on lap 95.

Of course, on an unforgettable night at a quarter-mile oval dubbed ‘America’s Dirt Track,’ the final lead change didn’t mean the race was over. McCreadie gave himself an undeniably anxious moment on lap 98 when brushed the outside wall in turn two, allowing Jimmy Owens of Newport, Tenn., who had just passed Babb for second on a lap-96 restart, to mount a last-ditch bid for victory.

Owens, 42, surged to the outside of McCreadie entering turn three, nearly nosed ahead to lead lap 99 with a crossover move off turn four and appeared primed to slide by McCreadie through turns one and two, but the former WoO LMS champion wasn’t going to be denied. McCreadie absolutely rocketed off the outside off turn two — squeezing the scant space between Owens and the wall — vaulted ahead down the backstretch and beat Owens back to the finish line by 0.691 of a second.

Mason Zeigler of Chalk Hill, Pa., finished third after overtaking both WoO LMS points leader Darrell Lanigan of Union, Ky., and Babb following the lap-96 caution flag. The 21-year-old driver started from the pole position and led laps 1-29 but had to rally after losing his rhythm and falling as far back as eighth place midway through the 100-lapper.

Babb, who started second and led four times for a race-high 44 laps, slipped to fourth at the finish. Lanigan, who started third and led lap laps 41-54, completed the top five.

McCreadie’s second WoO LMS triumph of 2014 and the 27th of his career gave his up-and-down season a major boost.

“We had to go to work because we haven’t been where we wanted to be,” said McCreadie, who tied ninth-place finisher Rick Eckert of York, Pa., for second in the WoO LMS points standings. “We’re starting to hit on all cylinders now, so I’m excited for this Sweeteners Plus team.

“It’s a team effort, man,” he continued, noting that he started his current swing of WoO LMS action two weeks ago with only his truck driver, Dave ‘Frog’ Griepsma, as a crewman. “I’m out here with just me and Frog, so I’ve had guys from Brady Smith’s come and help, Mark Richards’s (Rocket Chassis) crew — everybody’s been banding together to help us. It’s a beautiful sight.”

Everything fell in place Saturday night for McCreadie, who made a steady march to the front of the talent-laden pack from his starting spot deep in the field.

“I couldn’t get where I wanted to be on the (early) restarts,” McCreadie said. “(Billy) Moyer (who started 22nd) was getting all the good spots. He’d split guys early, and I was like, ‘This Moyer is gonna go right up through here.’ Then I got three or four (restarts) in a row where I wanted to be. … and I don’t know, it was like we didn’t really fade, but those guys just kind of died and we stayed strong.”

McCreadie grabbed the lead for the first time on lap 77 with an inside move past Babb, who had replaced Lanigan in the catbird’s seat on lap 55 with a powerful outside thrust. Babb returned the favor to pop back ahead of McCreadie on lap 78, McCreadie regained command on lap 80 as the pacesetters dealt with lapped traffic and Babb stole the lead again as lap 85 was scored.

When Babb shot in front on lap 85, even McCreadie was surprised. A daring slider entering turn one put Babb into the top spot.

“He scared the hell out of me when he did the one down there,” McCreadie said of Babb’s move. “I didn’t even know he was coming. I was like, ‘Holy cow!’

“I figured he knew one was coming back if I get close.”

That moment came on lap 95 when McCreadie pulled a slider underneath Babb rounding turns three and four. He immediately put several car lengths on Babb, but the race’s ninth and final caution flag, which came on lap 96 after Gregg Satterlee of Indiana, Pa., slapped the homestretch wall and stopped with front-end damage, set up a final sprint.

McCreadie appeared to be in great shape when he pulled away on the restart because Babb’s attempt to run the inside groove through turns one and two caused him to cede second place to Owens, who bumped-and-ran away from Babb off turn four heading to lap 97. But disaster nearly struck McCreadie when he got too high in the second turn and bounced through the cushion of dirt built up against the outside wall.

“That’s the story of my life — a bunch of brain fades in between some good laps,” McCreadie said. “I had a big one off of two. I didn’t think I was gonna get off the wall.”

Owens certainly saw an opportunity to swipe the big money from McCreadie’s grasp.

“I got under him there (through turns one and two on the final lap) and thought about putting a slider on him, but I thought best of it.”

Indeed, Owens didn’t let his car drift directly in front of McCreadie off turn two, and as a result McCreadie was able to step on the gas and beat Owens off the corner.

“Jimmy gave me a lot of room off of two,” McCreadie said. “He could’ve knocked me straight into the catch fence, but he’s a true professional.

Babb, meanwhile, was left to hang on for a fourth-place finish after running the final three circuits with a left-front that was cut when he and Owens made contact after the restart. He could only wonder if there was something he could have done different to score a second straight PDC triumph.

“The way it happened, I knew Timmy was gonna come back at me at some point,” Babb said. “When I had the lead I just kind of laid low for a minute. I didn’t run a hundred percent on the cushion — I guess I should’ve just kept going hard, but I didn’t want to make a mistake, jump the cushion and crash myself. It’s a fine line.

“Then we (McCreadie) did get by me (on lap 95), the biggest mistake I made was on that (lap-96) restart when I went to the bottom in one and killed my momentum. I lost a little momentum, and (Owens) pounded. They rolled me, and I ended up getting a flat left-front when Owens went across my nose there in four.”

Zeigler quietly snuck back to third at the finish, giving him a career-best WoO LMS outing. He knew his performance could have been better, though.

“That’s experience I guess,” Zeigler said. “I just got out-wheeled tonight, straight up. The middle (lane) just sort of went away halfway through the race when I was leading and I was just too stubborn to get out of it.

“Once I got back to the bottom we were OK, but it took me the rest of the race to get back up there (in contention).”

Among the contenders to fall by the wayside during the 100 was Jonathan Davenport of Blairsville, Ga., who moved up from the 10th starting spot to battle Lanigan and Babb for the lead before bowing out with engine trouble on lap 42.

Saturday night’s program began with a pair of 20-lap B-Mains won by Wendell Wallace of Batesville, Ark., and Jimmy Mars of Menomonie, Wis.

The WoO LMS heads next to Wisconsin for four nights of competition. Shawano Speedway hosts a $10,000-to-win event on Tues., July 29, followed by the three-day USA Nationals at Cedar Lake Speedway in New Richmond highlighted by a $6,000-to-win preliminary program on Thurs., July 31, and the weekend’s headline 100-lap event offering a $50,000 top prize on Aug. 1-2.