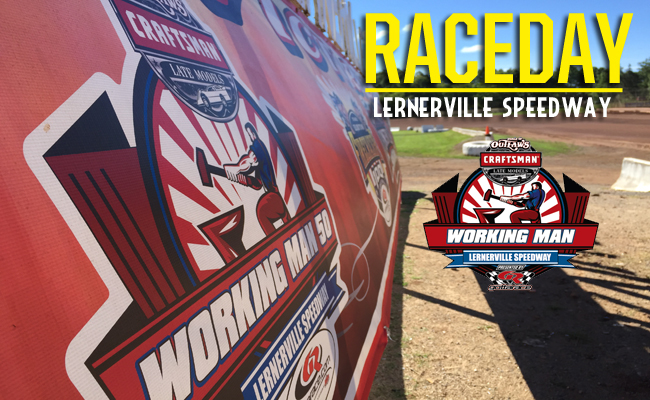 “It’s awesome to be back at Lernerville,” Mars said. “We don’t get to race as much as we want to right now. Things are going good, and I have so many people to thank. We have a lot of great people behind us. Everything worked great.”

Mars’ last World of Outlaws Craftsman® Late Model Series victory came on July 2014.  In a seven-caution spectacular, Mars fought a stout group of series regulars. Three-time Series Champion Josh Richards, who was seeking his record-breaking 18th win of the season, swiftly led the 24-car field in the beginning laps of the race from fourth.

Richards led 64 laps of the main event, while the rest of the top five relentlessly battled for a chance to take on the red-hot driver out of Shinnston, W.V. Early on, it was Mars. Mars maintained a half-second behind Richards for the first eight laps. Thereon, he funneled back to as far as fourth place.

With 28 laps remaining, Mars passed Eckert for second. Meanwhile, 2013 Rookie of the Year runner-up Morgan Bagley moved into fourth position – knocking on the door of his second top five performance of the season.

The pivotal moment in the race came with 11 laps remaining. Richards, who was weaving through lapped traffic and building his lead over Mars, made contact with one of the cars. His car suffered a right-front flat tire, essentially giving Mars the go-ahead for the lead.

“Yeah, that was too bad for Josh,” Mars said. “It’s tough in lapped traffic, you know?  That stuff just happens, and it sucks. I’ve been in that position before. For the last few laps before that I’d say Josh and I were both saving our tires a little bit, and the bottom had a lot of moisture. I don’t know what he had for tires, but our car worked great. So I was patient in the beginning, fell back there a little bit, and then I was there at the end.”

On the restart, Bagley catapulted his No. 14M Gotta Race Apparel/  P-W Sales Black Diamond car into second place. Bagley was able to diminish Mars’ lead to 1.258 seconds with four laps to go, but ended up losing a half-second by the time he hit the checkers. Billy Moyer Jr., whose last top five finish came on August 13, squeaked into the final podium spot over Eckert in his No. 21JR Crop Production Services/ Karl Performance Moyer/ Victory racecar.

Bagley’s second place finish was his best of the season. He finished third earlier in the season at Tyler County Speedway (W.V.) on May 29. Mars said the last laps of the race were suspenseful with Bagley on his tail. With Mars “overshooting the corner a couple of times in turn one,” it lent enough room for Bagley to make a last-ditch effort.

“[Our season] is definitely headed in the right direction,” Bagley said. “I’ll tell you, we’ve been really working hard all year trying stuff. I mean, we’re just really getting back to standard. We’re just trying to keep our program up to par, get our cars better. Jimmy was good. Hats off to them. They had the car to beat. We got into [turn] one and two a little better than him. I just ran out of track there. We were going to give him hell and try something.”

Moyer Jr., who leads the Rookie of the Year standings, recorded his fifth top five performance of 2016.  Moyer started 12th in the Craftsman Club® feature, and he credits his tires for his strong charge to the podium.

“We came in, changed tires and the car to make it a little better,” Moyer said. “We just really weren’t good at the beginning. Early on, I sometimes don’t drive very well sideways with the wheel-spin like a lot of these guys. I thought we had a flat there and changed tires. It helped. This Billy Moyer car has been really good lately. Thanks to all the fans. If it wasn’t for them we wouldn’t be out here.”