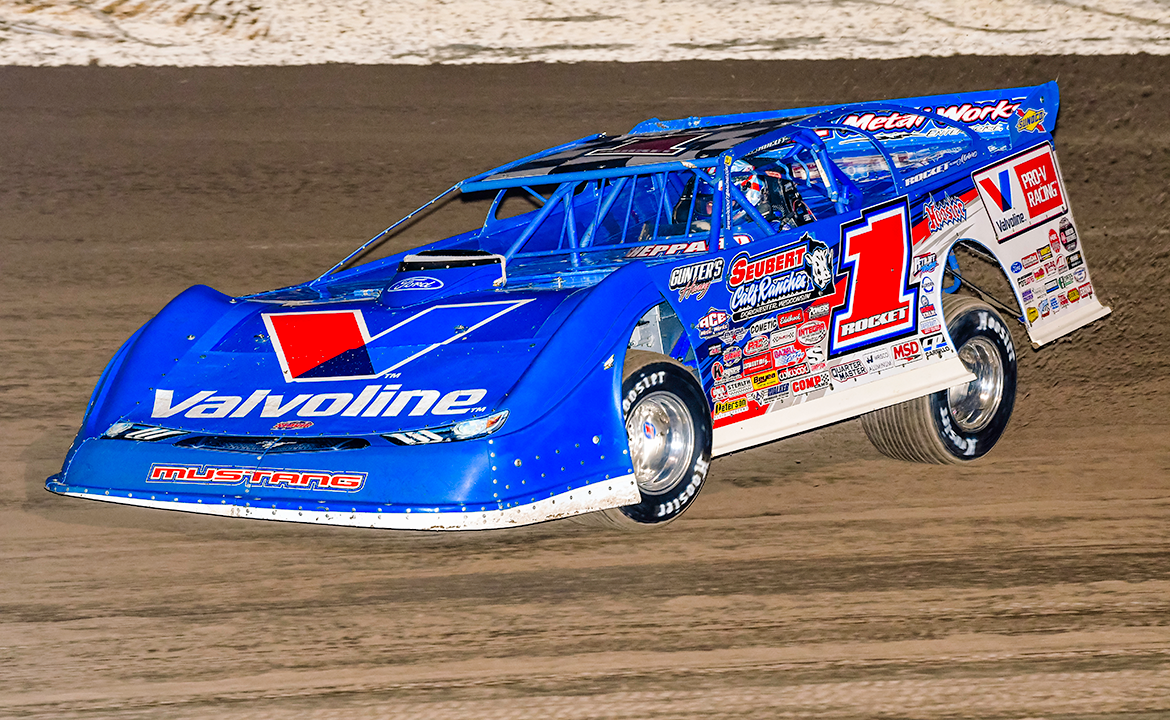 Jim Adams Photo
The field readies themselves for first big racing weekend of the year as Sheppard tops chart
By Jordan DeLucia | January 3, 2020 at 5:01 am

VADO, NM – The first Hot Laps of the decade for the World of Outlaws Morton Buildings Late Model Series were turned in on Thursday night at Vado Speedway Park in preparation for the season opener, the inaugural Battle at the Border.

Forty-two cars took to the track for an extended practice session to shake-down the setups and get a first look at New Mexico’s newest place of race. Drivers were met with some chilly temperatures and a smooth, fast racing surface for the first night of the year in action.

Two-time and defending World of Outlaws champion Brandon Sheppard, of New Berlin, IL, seemed to be picking up right where he left off in 2019, topping the chart with a lap of 13.794. For never having been to the facility before, like most other drivers in the field, The Rocket Shepp sounded quite satisfied with the way his Rocket1 Racing machine took to the new 3/8-mile.

“It’s going to be an interesting week, for sure. We learned a little bit of stuff on the car for this racetrack, got better throughout the night and were really fast and consistent every time we went out on the track. That’s really all you can ask for at this point,” Sheppard said.

“The car was really good, just like it was all last year,” Sheppard continued. “We’re definitely happy to come right out of the box and have a fast piece.”

Scott Bloomquist Racing driver Chris Madden, of Gray Court, SC, had a bit of an up-and-down practice session but was able to get everything ironed out by the final group. He initially took his Drydene Performance Products #0M on-track, ready to turn it loose, but discovered an internal issue after only a single lap. Taking it back to the pits, he and the crew diagnosed it with an electrical issue but were able to make repairs to get the car back out for more practice.

Madden has been fighting illness over the past few days, but still is able to suit up for the weekend’s events. Thus, he kept it short and to the point in talking about how each of the #0 cars performed on the track in Hot Laps, as Madden jumped behind the wheel of both his and teammate Bloomquist’s car before the session was over.

“We finally got it figured out and made a pretty good run the last session in my car,” Madden said. “We didn’t have any trouble with Scott’s car, it was good right off the bat.”

While his new, white Drydene #0M was being repaired, Smokey took a round of Hot Laps in Bloomquist’s traditional black #0 and went straight to the top of the leaderboard, clocking in at 13.943 – good enough for second-fastest overall.

The only Outlaw in the field with experience at Vado, Robeline, LA’s Cade Dillard, enjoyed quite a bit of speed in his practice runs, turning in a fast time of 13.996 to put him fourth overall. Having won two Modified races at Vado last year, Thriller has the experience edge over the other nationally/regionally touring drivers and will definitely be using it to his advantage this weekend.

“Some of the things I struggled with in the Modified, I had issues with on [the Late Model], but I was kind of expecting that,” Dillard said. “All-in-all, we had some good times and I feel like we were right there with the majority of the top ones. We’ll just keep working at it and hopefully get a little bit better.”

Now aboard the new Barry Wright Race Cars ICON house car this year, Darrell Lanigan, of Union, KY, also had a nice showing in his practice outings, posting a fast time of 14.153 to place him ninth overall. As of now, he and the Viper Motorsports crew are just focused on getting used to the new car and the new track.

Now that the teams have had the opportunity to shake off the dust, it’s time to go racing. Night #2 of the inaugural Battle at the Border will see a full race program including Hot Laps, Qualifying, Drydene Heat races, redraw, Last Chance Showdown and the 30 lap, $5,000-to-win Morton Buildings Feature. The first official points race of 2020 gets underway on Friday with Hot Laps scheduled for 6pm MT, live on DIRTVision!