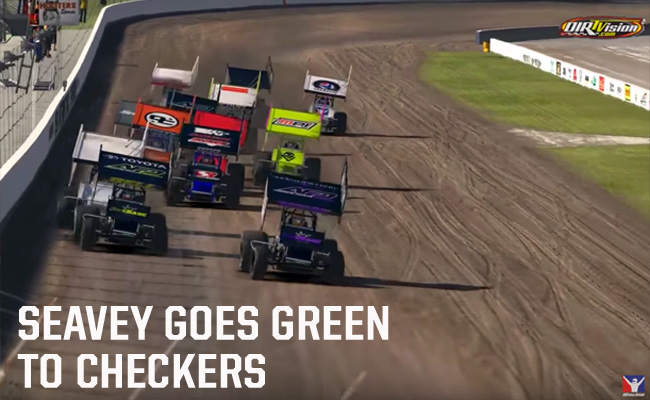 Logan Seavey went green to checkers at USA International Speedway on Monday night to win the weekly iRacing World of Outlaws Craftsman Sprint Car Series feature. Although he may have led all 25 laps, Seavey didn’t have it easy. Second fastest qualifier Christopher Bell shadowed Seavey throughout the race and was in position to steal the win when the field came down to a restart on Lap 20 following the night’s one and only caution. But Seavey had matters under control and bolted clear of Bell at the green to motor to a .229s win.

Unlike the first two places, third spot was up for grab most of the the race as Stephen Moore battling four time Chili Bowl Nationals champion Kevin Swindell. The pair traded places several times at the line – and many more times elsewhere – but Swindell got a great restart to secure the position, while Moore slipped to fifth behind Adam Elby who completed his charge from his ninth place starting spot.

Next week finds the iRacing World of Outlaws Craftsman Sprint Car Series heading to Volusia Speedway Park for another round of dirt track sim racing. Be sure and catch all the action on iRacing Live and DIRTVision.com on Monday, May 15 starting at 8:30 Eastern.