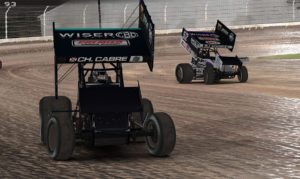 “I’m pumped up!” said Chase Cabre after his maiden victory. “I was really nervous the last couple of laps. I circled this place on the schedule—this was the place where I knew I had the best shot to win. It’s been my best track on iRacing since it came out. I’ve run a ton of laps here on the cushion, had a lot of practice at it, and was good enough to sneak away.”

At the beginning of the night, it looked like points leader and three-time 2019 winner Alex Bergeron had a fourth victory in him. He posted a hot lap toward the very end of qualifying to snag the pole and conquered his heat race as well, while both Cabre brothers and Kasey Kahne Racing’s David Heileman scored the other three heat wins. Wild heat races left a number of the top drivers in the standings to fight for the scraps in the two last chance qualifiers; defending champion and last week’s winner Tim Ryan was among the unlucky group that would have to go home early.

The final saw Bergeron lead the first lap, but not before Heileman led out of the first corner with an aggressive slide job. Heileman’s charge for the win would come to a premature end on the third lap, as he overrotated and backed up a number of other cars trying to get on the gas, but the pressure would continue for the top spot as the Swindell cars began to swarm Bergeron. By the eighth lap, the Cabres were running 1-2, with Edens boxing Bergeron out of the final podium spot.

A flip by Vinnie Sansone in the middle stages of the race led to the lone caution of the night, preventing the leaders from hitting lapped traffic and allowing for a fair fight for the win. Chase Cabre would lead Edens on the restart and hang on through the final eight laps of the race to earn a well-deserved checkered flag, with Cabre running the high line and Edens hugging the bottom of the track. After taking the checkered flag, Cabre appropriately honored the late Bryan Clauson by parking it over Clauson’s logo in the winner’s circle, a move made more appropriate by Cabre running the #39, Clauson’s old number, this season.

“I think we ran all 30 laps down there,” Edens said of the low line. “I thought we had something to win, but Chase was just too good up top. He never made a mistake and ran a perfect 30 laps. I did everything I could down there, but I just came up a little short.”Preview (opens in a new tab)

Joel Berkley completed the top five after starting last in the field, unable to track down Bergeron for fourth place at the checkered flag. Bergeron retained his massive championship advantage with the finish, but Monday represented the first time all season that he’s missed the podium of a main event.

“It was really the start where we fell back. Heileman was running a different line in Turns 1 and 2, and that shaved off time. Chase got by us, so I tried the bottom, but James was in front of me, so we just couldn’t do anything. We had the fastest lap of the race by almost a tenth, so that was good, and I think we had a fast car tonight for sure. We won qualifying and the heat race, but we took it easy tonight—we’re running for the championship, and you can’t make mistakes at all.”

With only four races remaining in the iRacing World of Outlaws NOS Energy Sprint Car World Championship, points are officially at a premium for the rest of the season. Next Monday’s race will see the series return to Eldora Speedway for the second time in four weeks, as Bergeron looks to extend his championship advantage and make up for the handful of points he lost to the Swindell Speedlab team this week. As always, the race can be streamed live at 9PM ET on the iRacing eSports Network on Twitch, YouTube, and Facebook.