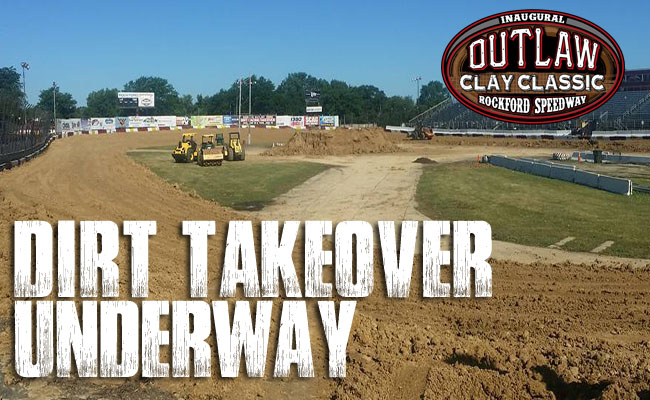 ROCKFORD, Ill. – June 27, 2016 – The ‘Dirt Takeover’ is underway at Rockford Speedway as Illinois river clay is currently being spread across America’s favorite paved short track in preparation for the Outlaw Clay Classic and the World of Outlaws Craftsman® Sprint Car Series and World of Outlaws Craftsman Late Model Series on Wednesday, June 29 and Thursday, June 30.

As the series prepare to make history with Rockford Speedway, series regulars are gearing up for the once-in-a-lifetime opportunity on America’s newest dirt track – a distinction it will hold for just a few days.

Unlike his fellow racers, for 2014 World of Outlaws Craftsman Sprint Car Series Rookie of the Year Brad Sweet, racing at Rockford will not be a first. The former pavement racer has taken on 1/4-mile high banks before.

“I’ve actually been there before and raced on the pavement,” Sweet said. “Obviously, it will be a lot different. There’s a lot of unknowns any time you put dirt on a pavement track. I think it will be exciting. Hopefully we can do really well there.”

World of Outlaws Craftsman Late Model Series regular Brian Shirley is from Chatham, Ill. three hours south of Rockford. The Outlaw Clay Classic is not the closest the series gets to his home, but it is nice, he said, to be nearby.

“With [Rockford], it’s pretty close to home so we won’t have to drive far,” Shirley said. “We’re really looking forward to the event. Hopefully we can debut on that deal and be pretty good.”

Joining the Outlaw Clay Classic is the Badger Midget Racing Association and Wisconsin Legends. The Badger Midgets join the sprint cars on Wednesday while the legends join the late models on Thursday.

Individual tickets and two-day packages for the Outlaw Clay Classic staring at $35 are on sale now. Overnight parking for campers and kids pricing is also available. Purchase your tickets now by calling 844-DIRT-TIX (347-8849), or visitingWorldofOutlaws.com/Tickets. For more information, log on to WoOSprint.com/Outlaw-Clay-Classic.