Sides Seeks the Up-Side at Vegas 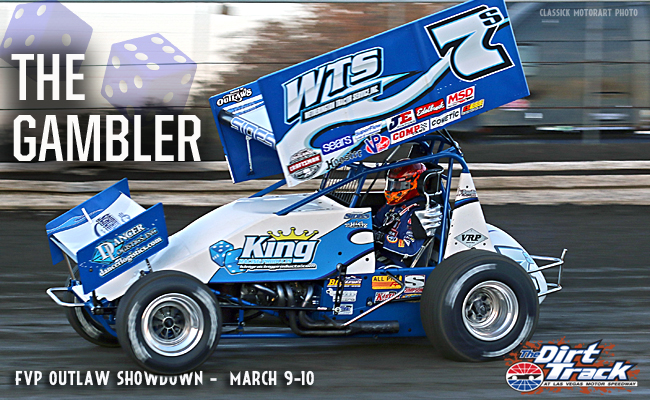 At a Glance: Sides Seeks the Up-Side at Vegas
Will try for his first career series win at the fast-action half-mile

CONCORD, N.C. – March 6, 2017 – Though they are vastly different in entertainment, there is a distinct similarity between the alluring Las Vegas, Nev. strip and The Dirt Track at Las Vegas Motor Speedway less than 20 miles down the road. For “Double Down” Jason Sides, the World of Outlaws Craftsman® Sprint Car Series FVP Outlaw Showdown is a matter of defeating the odds for the ever-coveted $10,000 jackpot.

Since 2013, Sides has recorded four top-five performances in eight shows. Specifically in 2013, Sides finished runner-up in both shows. He has yet to win an event at Vegas in his 14 years with the series, which is a reason why he will “gamble a little more” to lead the pack into the checkers.

“There’s just something about [the track],” Sides said. “We always have done well there. We can always run the bottom though the top is there too. We seem to be quicker on the bottom, and if you can get around the bottom you should be good. We always love coming to Vegas for the racing and the atmosphere.”

The event’s finale in 2013 resonates the most with him. In a battle with Tim Kaeding – who eventually won the show – he remembers vividly running him down in the closing laps. In the 30-lap feature, Sides made his way from 11th to challenge Kaeding, whose car was experiencing mechanical issues toward the end. He saw his chance.

“On the restart, his MSD box started to go out,” Sides said. “It was barely letting him run, but it was just enough for him to get off the corners better than us.”

The half-mile allows for some of the fastest on-track action on the tour’s 90-plus race schedule. Since Sides’ most memorable battle, four Outlaws currently on the tour – Joey Saldana, Donny Schatz, Shane Stewart and Paul McMahan – have taken the checkers in six of the last eight events. Schatz is the only repeat winner; Sides seeks to accomplish what his nickname encourages by sweeping both shows. But to get at least one win will give Sides a victory he has longed to capture.

“It could be [why they call me ‘Double Down’],” said Sides with a grin when asked if he could sweep the multi-day event. “It’s a nice facility where you want to win. It could be cold and it could be windy – it was snowing and sleeting one time when we pulled in – but it’s always fun to be there. I think we have what it takes to get the job done. If we qualify well to be starting toward the front, I think we can. We’ve had every opportunity – running second there. I want to get a win there.”

Since 1996, the series has made 35 appearances at the track – including 13 multi-day shows in a span of 19 years. This trip marks the ninth consecutive year the Outlaws will be at the half-mile. With help from FVP, the Vegas stop on the Outlaws’ schedule has grown into an annual mainstay where the top sprint-car drivers from around the country gather for some of the most exhilarating dirt racing nationwide.

“FVP has been a long-standing partner of the World of Outlaws and we are pleased to continue the tradition of the FVP Outlaw Showdown,” said FVP Senior Brand Manager, Amber Misunas. “In the shadow of the bright lights of the Las Vegas strip, we are excited to be a part of the ‘Greatest Show on Dirt’ over the course of two big nights at The Dirt Track at Las Vegas.”

For more information about the series’ western swing, visit woosprint.com/kick-off-tour.