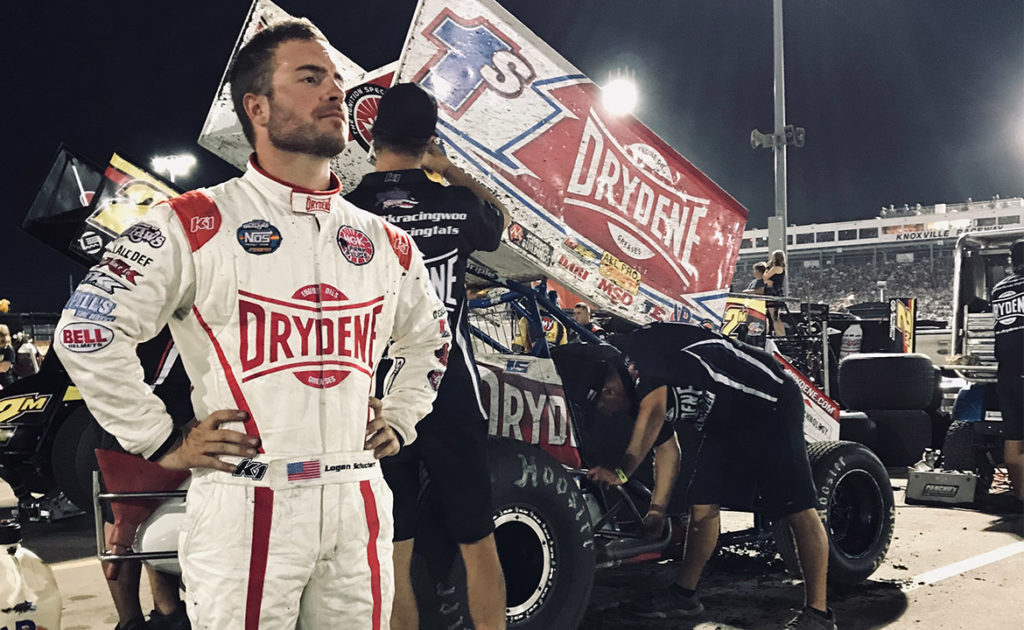 The Hanover, PA driver was a stealth agent among the crowd hunting his target. While Gravel drove away with the lead, Schuchart weaved through traffic almost undetected. If you took your eye off of him for a second, you’d find him five spots further up the field your next viewing.

By the end of the prestigious 50-lap event, Schuchart charged his way from 22nd to second. It was a fun challenge, he said… Only once the race was over.

“It’s a tough job as it is,” Schuchart said. “Making it harder on yourself isn’t really helping the nerves or stress level.”

But once achieved, he was never more excited to finish second in such dramatic fashion.

You can relive that excitement and hear Schuchart discuss it on Saturday, March 28, during the DIRTVision #DVWatchParty presented by NOS Energy Drink. Starting at 6 p.m. (ET) DIRTVision will broadcast three of the best Sprint Car races from Knoxville Raceway, with race winners and key players providing commentary on the race.

“Knoxville has been really good to us since going there,” Schuchart said. “We’ve had some bad runs, too. But always really liked going to Knoxville. But this year I feel like we really broke through with being a top-notch car… When you have a good car in one of our biggest races it makes you excited to go back. Definitely a lot of high expectations from the racing world this year.”

And while Schuchart’s hard charger run in the Nationals will be one of his most notable performances, he has an impressive history of racing his way from the back of the field to the front of the pack.

He is cool under pressure in big events, too. Along with his 22nd to second run at the Nationals, he charged from 20th to fourth in the 2017 National Open at Williams Grove Speedway and powered from 12th to second in the 2019 Kings Royal at Eldora Speedway.

In the last two years there have more 10 races that he’s gained 10 or more spots in a race. He also won the KSE Hard Charger of the Year Award in 2017.

When faced with having to race from the back of the field, Schuchart said the key is to “use your head and pick your marks and pick your times to take shots as far as passing people instead of forcing the issue.” Doing so helps him keep his momentum and swiftly secure each pass.

“You want to go where the person in front of you isn’t,” Schuchart said. “That being said, you want to do it in a timely manner where you’re not pushing the issue too hard. You’re still keeping the car under yourself at the same time. It’s definitely a fine line.”

There are several drivers he’s raced with for so long know that, he said, he has a pretty good idea of where they prefer to run on the track. That knowledge also helps him cut through the field in rapid time when needed.

Schuchart and his Shark Racing have learned what it takes to rise from the bottom since they entered the World of Outlaws NOS Energy Drink Sprint Car Series full-time in 2014. Their first year was all about survival, hoping to make it to each race. Now they’re one of the top teams in the Series. Schuchart won a career high eight races in 2019 – doubling his career win total – and added another victory to his resume at the season opening DIRTcar Nationals this year. He is currently two points behind points leader and reigning champion Brad Sweet.

While he’s had several big wins in his career, Schuchart said his second place run at last year’s Knoxville Nationals feels like a win to him – it also paid more than any race he has won. To him, Knoxville is a special place.

“I always like going there because of the atmosphere,” Schuchart said. “To go to Knoxville (Iowa), knowing it holds the Nationals and how passionate all of the people there are about Sprint Car racing made me a huge fan of Knoxville in itself.”

“The racetrack I always thought was a great racetrack. It produces two to three lines of racing. You can start in the back and still come up through at Knoxville. That’s somewhat rare to find at half mile race tracks. I always thought it was a great racetrack to race at…The way the track is set up, you can run the bottom and make up a lot of time on somebody. You can gain five, six car lengths in one corner. But you can also lose five to 10 car lengths in one corner if you miss your marks. That’s what I think makes Knoxville pretty unique and why you see some of the great racing you see at Knoxville.”

Saturday, March 28, at 6 p.m. (ET). DIRTVision will show three prominent races from Knoxville Raceway for the #DVWatchParty presented by NOS Energy Drink with winning drivers and key figures from each race recounting all of the action.

The DIRTVision FAST PASS is available for $39/month and features the World of Outlaws Sprint Car and Late Model Series, weekly racing from Knoxville Raceway, Williams Grove Speedway, and Attica Raceway Park, the DIRTcar Summer Nationals, the biggest Sprint Car events in Australia and much more.