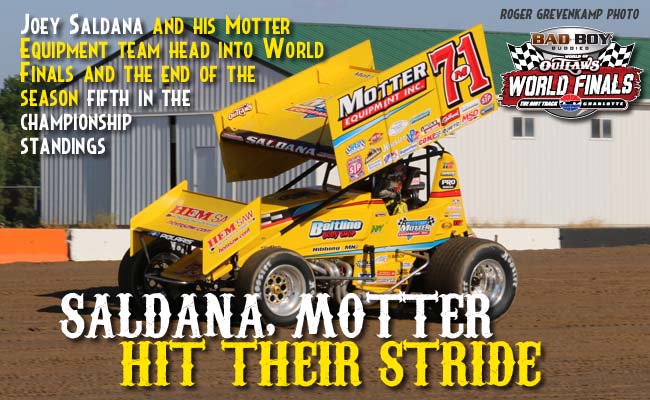 In 2014 Saldana and Motter Hit Their Stride

CONCORD, N.C. – Nov. 3, 2014 – Joey Saldana and his Motter Equipment team hit its stride in 2014 compiling high profile wins and earning the title of ‘King of the Quicktime.’

Saldana got off to a quick start in his 71m Motter Equipment car, scoring wins early at Perris and Salina.

In Charlotte, Saldana led flag-to-flag – a fact that obscured the pitched battle he fought with Donny Schatz throughout the feature to get the win. It was, Saldana said, a tough win against a driver who thrives on slick racetracks.

As the series swung into the upper Midwest in early June, Saldana and his team were again dialed in.

They first took the win at I-80 Speedway and then went on to win at Jackson Speedway in Minnesota a week later. It was his third win in as many weeks.

Late in the season as Saldana and his team looked to close out 2014 on a high note, he took home back-to-back victories. At Eldora Speedway for the Four Crown Nationals, Saldana held off a hard-charging Donny Schatz to claim his sixth win of the season.

“This is amazing because I actually beat Donny Schatz,” Saldana said in victory lane following his win. “He’s been unbelievable this year and just to be able to race with him and be able to drive with the World of Outlaws – honestly, it’s an honor to just be out here and race.”

Saldana followed that up the next night at Lernerville Speedway’s Commonwealth Clash. After taking the lead early from polesitter Logan Wagner, Saldana fended off challenges from David Gravel to score the win.

By the end of the season he had nearly 40 top-five finishes, nearly 60 top-ten finishes and more than 20 quick time awards.

From the high points of 2014 to the growing pains of a team still relatively new, Joey Saldana had one of the most successful seasons of his World of Outlaws STP Sprint Car Series career.

With his wins this season, Saldana is now the sixth winningest driver in World of Outlaws STP Sprint Car Series history – and he is just a few wins away from surpassing Doug Wolfgang’s win record and moving into the top-five.

Saldana and his team enter the Bad Boy Buggies World of Outlaw World Finals locked in a tight points battle for fourth with Kerry Madsen. Saldana, in fifth, is just 53 points away from Madsen.